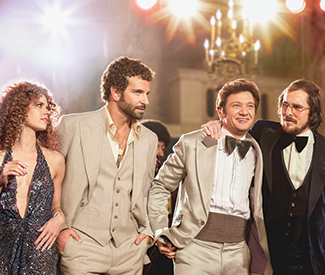 FILM If longer were better, this would be the platinum era of movies. Never before have so many mainstream releases staggered toward or beyond the two-and-a-half-hour mark once reserved for the truly epic — in storytelling breadth, not just in fight scenes, expensive CGI effects, or simple directorial inability to say “when.”

David O. Russell’s American Hustle is about that long, and it’s like a lot of things you’ve seen before — put in a blender, so the results are too smooth to feel blatantly derivative, though here and there you taste a little Boogie Nights (1997), Goodfellas (1990), or whatever. Normally that would not be a particularly promising combination, but in the current climate perhaps no praise could be higher than to say there isn’t a minute among Hustle‘s 138 when it’s safe to run to the bathroom. This isn’t necessarily the best film of the year, let alone the most original, but it’s quite possibly 2013’s most enjoyable major-studio release — at least if you’re over 15 and not over-enamored with superheroes or elves.

Loosely based on the Abscam FBI sting-scandal of the late 1970s and early ’80s (an opening title snarks, “Some of this actually happened”), Hustle is a screwball crime caper almost entirely populated by petty schemers with big ideas almost certain to blow up in their faces. It’s love, or something, at first sight for Irving Rosenfeld (Christian Bale) and Sydney Prosser (Amy Adams), who meet at a Long Island party circa 1977 and instantly fall for each other — or rather for the idealized selves they’ve both strained to concoct.

He’s a none-too-classy but savvy operator who’s built up a mini-empire of variably legal businesses while honing a ’70s swinger suavity à la Bob Guccione. She’s a nobody from nowhere who crawled upward, gave herself a bombshell makeover (Adams is almost exclusively costumed J. Lo-style, inner side boobs on full display), and like Barbara Stanwyck in 1941’s The Lady Eve specializes in posing as British aristocracy — the Lady Edith, to be precise. They’re upwardly mobile con artists who know their limits.

The hiccup in this slightly tacky yet perfect match is Irving’s neglected, crazy wife Rosalyn (Jennifer Lawrence), who’s not about to let him go — nor can he bring himself to leave their son, even if the kid isn’t his biologically. At least she’s their main problem until they meet Richie DiMaso (Bradley Cooper), an ambitious FBI agent who entraps the two while posing as a client in desperate need of loan-sharking services. Their only way out of a long prison haul, he says, is to cooperate in an elaborate Atlantic City redevelopment scheme he’s concocted to bring down a slew of mafioso and presumably corrupt politicians. Even if they have to fabricate crimes to hustle the not-yet-guilty into — notably a beloved Jersey mayor (Jeremy Renner) whose nose is as clean as can be given a constituency riddled with tough customers and backdoor deals.

A male even more aspirationally alpha than Irving, Richie is in over his head with this Machiavellian plan — which eventually ropes in terrifying, seldom-seen mob legend Victor Tellegio (Robert De Niro) — as his oft exasperated superiors are well aware. But as the sting rolls heedlessly forward, the conspirators’ Achilles’ heel turns out to be Rosalyn, who can’t be kept entirely out of the loop and certainly can’t be counted on not to blurt exactly the wrong thing at the worst possible time.

Scored to a K-Tel double-album-full of greatest hits from earlier in the Me Decade (these people aren’t on the cutting edge, musically or otherwise), American Hustle is a giddy tale of Horatio Alger-style all-American gumption headed toward a train wreck. Russell’s filmmaking is at a peak of populist confidence it would have been hard to imagine before 2010’s The Fighter, and the casting is perfect down to the smallest roles. But beyond all clever plotting, amusing period trappings, and general high energy, the film’s ace is its four leads, who ingeniously juggle the caricatured surfaces and pathetic depths of self-identified “winners” primarily driven by profound insecurity.

Our first view of Irving (or anything) is a camera spin around his ample middle-aged gut and up to the gaping bald spot he’s in the process of concealing. Bale retains his handsome features, but the physical transformation he’s undertaken here extends to a schlemiel-in-camouflage slouch whose roots you can feel in Irving’s very thought processes. More recognizable despite his curly locks and disco shirts is Cooper, who after this and Russell’s Silver Linings Playbook (2012) has clearly found his niche: playing control-freak rageaholism for manic comedy.

Lawrence’s Judy Holliday-meets-Valerie Perrine turn has justly been praised enough elsewhere. She’s spectacular, but the stealth heart of the movie belongs to Adams in a role that might easily have been played as merely “hot.” Sydney is brighter and more coolly rational than those around her; but life has taught her that a girl’s best bet is to look good and make the man think he’s doing the thinking for both of them.

Adams is a natural comedian, yet here she’s also the presence onscreen most alert to everything that’s going on, making Sydney the most thoughtful character and hers the most subtle performance. Without her, American Hustle would be great fun but a little hollow. With her, it almost seems genius, as if Preston Sturges had remade 1997’s Donnie Brascoe.

Big fantasy films have grown repetitious, yet they grow ever longer despite the fact that short-attention-span cinema really, really benefits from reining in the runtime. Prestige movies, too, seem to be under some sort of pressure to streeeeetch it out. Would Captain Phillips, The Butler, or even (sue me) Blue is the Warmest Color have been better with a tighter length and focus? Of course they would. But the sheer bulk seems to confer importance, like those literary magnum opuses each year that command attention not because they’re an author’s best, but because they weigh as if they ought to be. *