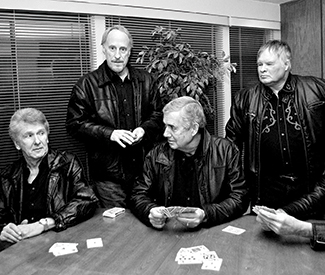 MUSIC It’s entirely debatable what year this current wave of the garage rock revival broke out.

But for all intents and purposes, let’s just say the genre came back into vogue yet again around 2009: the year&nbsp;Total Trash Productions&nbsp;came into existence. For the past five years, the booking company has served up dozens of garage rock shows and fests in the Bay Area.

And this year, on their fifth anniversary, the folks behind Total Trash are bringing a relic from the first wave: The seminal Washington-based 1960s garage rock band, the Sonics, will play a string of shows for the annual Total Trash Halloween Bash.

The Sonics were there in the very beginning. They got their start in a time when the British Invasion was in full swing. Rejecting sugary-sweet mop-topped bands, the Sonics idolized Jerry Lee Lewis and Little Richard.

“We thought, to heck with wearing suits and neckties,&quot; keyboardist-vocalist Gerry Roslie says. &quot;Playing love songs felt wrong &#151; we could only play music with power. We played loud and we played how we felt: like animals.”

The band released a string of albums in the ’60s, with a mixture of rock n’ roll covers such as &quot;Have Love Will Travel,&quot; &quot;Louie, Louie,&quot; and &quot;Roll Over Beethoven&quot; and edgier, screaching original numbers like “Strychnine” and “Psycho.”

Many credit the Sonics as a proto-punk band of sorts, but Roslie says he saw the band as an outlet to live out his rock ‘n’ roll fantasy until the grips of adulthood came.

“I didn’t know we were garage rock or proto-punk, because those terms didn’t exist at the time we were playing,” Roslie says. “I just knew that we liked being crazy and wanted to play something different than what was out there at the time.”

Roslie left the band in 1967 and started an asphalt-paving business. For decades he had no idea of the influence that his band had left, with future acts such as the Cramps, the Mummies, and the Fall all performing Sonics covers at one point or another.

During that time, Roslie lived a quiet life. That is, until the band was approached in 2007 to play&nbsp;Cavestomp!, a garage rock festival in Brooklyn. That was the first time the band played in well over 30 years.

“We were so nervous — we decided that we would only start playing shows again if people still liked us,” Roslie says.

And sure enough, the Sonics were received with great fanfare, and continued on to play shows in Europe. The one thing that still amazes Roslie is the enthusiasm of new and old Sonics fans alike.

“We’re still scratching our heads going ‘wow’ — I feel that we’re finally getting the attention we deserved,” Roslie says. “We played for teenagers and 20-somethings back in the day, and we’re still playing for that kind of audience. A lot of the kids look the same as they did back then.”

Like many bands that reunite, the Sonics are playing songs made when they were quite young themselves, for the most part covering issues surrounding teenage culture. But as it stands today, all of the members of the band are old enough to be card-carrying AARP (American Association of Retired Persons) members.

“I’m a teenager inside of some wrinkled old body,” says Roslie. “The songs that we made back then are still relatable because we’ve maintained our attitude. We’ve still got that.”

And the Sonics mojo is still intact. So much so that the band is creating a new album. According to Roslie, fans can expect it around late December or early 2014. The release isn’t titled yet, and the label is yet to be determined.

“We didn’t want to go off in a different direction like many bands that have been around for a while do,” Roslie says. “We’re keeping to what we know and do best &#151; loud, crazy rock n’ roll.”

Perma-teenagers or not, the Sonics still have attitude and candor aplenty, spreading the underground rock ‘n’ roll gospel (actively or not) since before you were born.