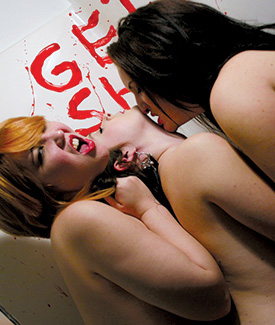 SFBG: You say rock is too serious today. Is there as much stimulation during your live shows as your site offers?

JPH: We’re not a gimmick band, but during our last song I do end up wearing a four-and-a-half foot long penis that shoots whipped cream. People start licking it off each other and everything. Feels great. Feels really great. I especially like to aim for couples.

JPH: I’m capitalizing on having fun. Porn is a fun, interesting industry. I’ve been doing a lot of research on what’s out there and over the years corporate backing has gone up while quality has gone down. But we’re all natural, with little-to-no editing. We’re committed to keeping girls in natural settings and giving them full creative control. Then we feature unsigned bands in our movies. Soon we’ll have a radio station. We’ve already got music from about 50 bands ready to go. We’re not just promoting ourselves, we want to promote all unsigned artists. We want to be just as rock and roll-oriented as we are porn-oriented.

SFBG: So who are the girls on the site?

JPH: Some are friends. We’ve also put up ads. Started getting girls for band photo shoots and met girls coming to shows. We start a friendship with them, they dance for us, and then we take their pictures. Some do it for their own personal portfolios. Some like the female empowerment, power over men through seduction. And they like us. We’re nice and fun to hang out with.

SFBG: Let’s be real: Are you doing this to get laid?

JPH: Actually no. I’ve been in a relationship for a couple years now. My girlfriend, Jilian Haze, does makeup and hair for all the models.

SFBG: You have a new female bass player, Laura Lush. What does she think?

JPH: Laura is a sexually open person. She contacted GetShotGirls about modeling for the site. Shortly after, she saw that we were looking for a bass and ended up being a great fit. She’s a tough chick — she broke both her legs at a Death Angel concert. And she’s bisexual.

SFBG: What about including some naked boys for the ladies and gay boys who like punk? And how about adding more diversity? So far all your ladies are pretty similar…and white.

SFBG: Once you get more cash flow, what’s your next step for the site?

JPH: A movie with a band getting fucked after their show, behind stage, by groupies.