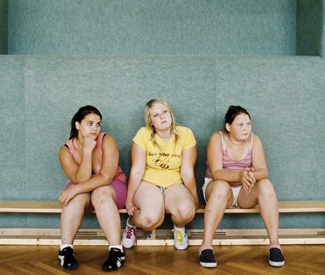 FILM Austrian Ulrich Seidl has been making films since the early 1980s, but didn’t get much attention internationally until 2001’s Dog Days, a bleak and nasty ensemble piece about some seemingly ordinary — but all variably pathetic, ugly and/or perverse — Viennese suburbanites sweating through a heat wave. It was the sort of movie that demanded attention, being grotesque, funny, surprising, meticulously crafted, and arguably just plain mean.

Following decades of mostly documentary work, he’d suddenly joined the ranks of what you might call the New (though not necessarily young) Misanthropes: directors like his fellow countryman Michael Haneke, France’s Gaspar Noé, and the Philippines’ Brillante Mendoza. For some their invariably depressing, often upsetting films illuminate the human capacity for cruelty. For others, they wallow in it.

After taking his time making a Dog Days follow-up (2007’s Import/Export, a predictably grim comment on Europe’s immigration inundation), Seidl is back in atypical bulk with his Paradise Trilogy, three lightly interlocking (there’s no real overall arc) features more tightly focused on hapless individual protagonists. Each are observed — and this director is among the most ruthlessly clinical observers around, as if cinema were a laboratory and characters his test subjects — on vacation. But of course the experience of any earthly paradise is a sour joke in the contexts they find themselves in. Striking if unpleasant, the trio gets its Bay Area debut over the next three weekends at Yerba Buena Center for the Arts.

But Teresa wants something more — or at least the illusion of it. Ergo she’s thoroughly suckered when the first seemingly non-predatory beach stud she encounters (Peter Kazungu as Munga) starts asking for money — he’s got no end of needy sick relatives, it seems — once they’ve consummated his declared “love.” Similar disappointments ensue. Teresa’s naiveté isn’t exactly sympathetic, however. She unconsciously brings the full weight of class/racial privilege and condescension with her, and is endlessly, petulantly demanding as a sex tourist who insists on being treated as a lover. (The negotiation around how her breasts should be touched by Munga seem to take half an hour alone.) She just wants to be desired. Yet she acts like a pushy colonialist bargain shopper.

In Paradise: Faith (2012), the spotlight is taken by Teresa’s older sister Anna Maria (Maria Hofstaetter), who most certainly is not looking for romance, let alone sex — without wearing a cowl, this hospital radiologist has become a fervent bride of Christ. She spends her vacation time alone in her over-large house, scrubbing it spotless, flogging herself clean of impure thoughts before Jesus, and singing hymns at the Casio keyboard. She also goes on daily outings to the homes of strangers, frequently immigrants. She barges in with sizable Virgin Mary statues crying “The Mother of God has come to visit you!,” and tries browbeating them into sin-abjuring prayer. Needless to say, this all seems much more about her needs than theirs.

She returns one day to the unwelcome surprise of husband Nabil (Nabil Saleh), an Egyptian Muslim back after an unexplained two-year absence. They’ve both changed greatly — back then he wasn’t yet paralyzed from the waist down, and she wasn’t a born-again fanatic. He’s nonplussed that her vinegary form of “Christian charity” treats him more as a home-nursing burden than a marital partner, and hostilities between them soon escalate to nightmarish proportions.

Finally, there’s some light at the end of the tunnel with Paradise: Hope (2013). While Teresa is fucking Africans and Anna Maria proselytizing, the former’s teenage daughter Melanie (Melanie Lenz) has been packed off to fat camp, where she and other pudgy youths endure long days of tortuous exercise and other “improving” programs. But the kids have each other; rather surprisingly, Seidl doesn’t rain gloom on their giddy rapport. Melanie also develops a serious crush on the resident doctor, a handsome, friendly, and flirtatious fellow (Michael Thomas) approximately four times her age.

Convinced she’s overdue to lose her virginity, she’s an avid pursuer — and disturbingly, he’s kinda interested. It is the movie’s major failing that seemingly kind, intelligent, grounded Dr. Arzt remains too much of an enigma for us to grasp why he’d even consider taking up a 13-year-old on the offer of herself. Yes, Melanie is cute, vivacious, and likable … but, well, come on. Of course this won’t end well. Still, Hope is indeed the most hopeful of the Paradise trilogy: its main character’s life isn’t ruined already, and she might well survive the hard knocks she’s given here to experience actual happiness.