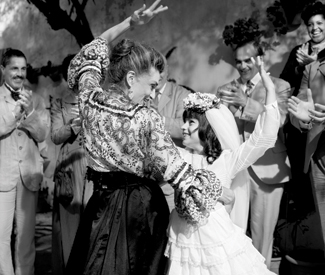 FILM The weak recent likes of Jack the Giant Slayer and Hansel & Gretel: Witch Hunters revealed the extent of expensive, formulaic action-movie lameness with which Hollywood is now determined to treat every story of universal familiarity (and conveniently, no pesky copyright). No doubt there will be a Cinderella: Bitch is Goin’ Postal somewhere in our future before the cycle spins out, if it ever does.

But fairy tales have such appeal that it’s hard not to want filmmakers to do interesting things with them, as opposed to the things they generally are doing with them. Two new European movies for grown-ups take elements of such tales — one a very familiar story template, the other just the tenor of a shiny, hyper real fable — and while they haven’t a great deal else in common, they both happen to be among the most delightful entertainments we’re likely to see this year.

Mikael Buch’s French first feature Let My People Go! is a fairy tale in the sense of something like Ma vie en rose (1997) or Potiche (2010) — it’s a warmhearted social satire stylized as if everyday life were constantly poised to break into a production number. Also, its protagonist is such a fairy: in what’s possibly the most inspired physical comedy performance by a French (or maybe any) actor since Jean Dujardin was last sighted, Nicolas Maury plays Ruben, a Parisian who came to Finland to pursue a masters in “comparative sauna studies” but stayed on for perfect boyfriend Teemu (Jarkko Niemi). With his skinny body language so floppy it’s like a master class in theatrical nelliness, Ruben gives off an air of someone ready at any moment to deliver a shrill hissy fit or world-class sulk. Not that he has occasion to, however, in this northern paradise of friendly moose, candy-colored villages, and postal delivery customers (the sauna thing didn’t pan out) who invariably greet him at the door with tasty snacks.

Of course, it’s a paradise he must be cast out of, after an inexplicably violent altercation with a customer on his route results in Teemu calling Ruben a “thieving murderer” and sending him back to (as the BF’s mother puts it) “that horrible country.” There, torn from the political correctitude of the great white north, he’s forced to deal with his ever-dysfunctional family: Mom (Carmen Maura) still thinks he just needs to meet “a nice Jewish girl,” Dad (Jean-François Stevénin) is cheating on her, sis (Amira Casar) is probably divorcing her “asshole goy husband,” and bro (Clément Sibony) is fed up with having to hold their hands through every new crisis.

Written by Buch and Christophe Honoré (not a guy usually associated with levity), Let My People Go! wends its way toward the predictable reconciliations all around with a certain sweetness and a great deal of inspired silliness. None more inspired than everything done by Maury, whose extreme stereotype might be offensive in another context — but in this endearing fable of tolerance, Ruben is as lovable as he is haplessly funny.

Pablo Berger’s Blancanieves is something else — Snow White, to be exact, transplanted to 1920s Spain and told (à la 2011’s The Artist) in the dialogue-free B&W style of that era’s silent cinema. If you saw the two crappy overblown Hollywood takes on that fairy tale last year, my condolences, but this is probably its best cinematic incarnation ever not made by someone called Walt.

Here, Snow is the daughter of a famous bullfighter (a beautiful performance by Daniel Giménez Cacho) who’s paralyzed physically in the ring, then emotionally by the death of his flamenco star wife (Inma Cuesta) in childbirth. He can’t bring himself to see his daughter until a grandmother’s death brings little Carmencita (the marvelous Sofía Oria) to the isolated ranch he now shares with nurse-turned-second-wife Encarna — Maribel Verdú as a very Jazz Age evil stepmother, whose vanity expresses itself in outrageous fashion spreads for the socialite columns. Once the girl matures (now played by the ingratiating, slightly androgynous Macarena García), Encarna senses a rival, and to save her life Carmen literally runs away with the circus — at which point the narrative slumps a bit. But only a bit.

Where The Artist was essentially a cleverly sustained gimmick elevated by a wonderful central performance, Blancanieves transcends its ingenious retro trappings to offer something both charming and substantiative. Berger doesn’t treat the story template as a joke — he’s fully adapted it to a culture, place, and time, and treats its inherent pathos — you didn’t see much of that in last year’s Mirror Mirror or Snow White and the Huntsman, did you? — with great delicacy. It’s hard to imagine who wouldn’t enjoy Blancanieves — well, excepting the audience for Hansel & Gretel: Witch Hunters.