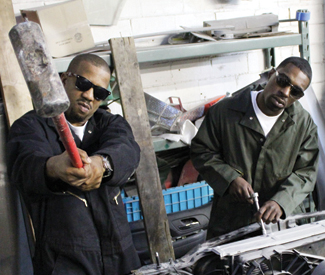 MUSIC In 2003, at Moses Music in East Oakland, I stumbled across a CD labeled “Numskull of the Luniz Presents…Hittaz on tha Payroll, Ghetto Storm” (Hitta Records). I bought it and was blown away, not simply by the rappers — one of whom, Eddi Projex, has gone on to be a Bay hitmaker — but also by the cinematic expressiveness of the music, with its moody, minor-key atmospheres and rapid counterpunctual basslines, courtesy of the Mekanix: Dotrix 4000 and Kenny Tweed.

Who were they? I found out in ’04, when I met Dot at a Digital Underground show. Turned out, he’d been the group’s late ’90s tour DJ, but left to pursue production, forming the Mekanix with Tweed in 2001. They invited me to their High Street studio, the Garage, to meet J-Stalin, a rapper they were developing who’d debuted as a teen on Richie Rich’s Nixon Pryor Roundtree (Ten-Six, 2002).

Soon after, the yet-unnamed hyphy movement began to foment and I got a gig covering rap for a great metropolitan alt-weekly….

I’d say the rest is history but nothing in Bay Area rap is ever that simple. On the one hand, the prolific Stalin is among the most popular local rappers — currently second biggest seller after E-40, according to Rasputin rap buyer Saeed Crumpler — with Dot and Tweed producing his entire solo debut, On Behalf of the Streets (Zoo Ent., 2006) and a chunk of his sophomore effort, The Pre-Nuptial Agreement (SMC, 2010).

Besides Stalin and Eddi, the duo helped launch former Delinquent G-Stack’s solo career, as well as newer artists like Shady Nate, DB the General, and Philthy Rich. Last year, they even landed a track on the deluxe version of E-40’s Revenue Retrievin (Heavy on Da Grind), and 40 declares his intention to continue working with them.

“The Mekanix are pure talent,” 40 enthuses over the phone. “Even though they make mob music, you can tell they grew up listening to soul music from the R&B days; they could make a killer cry!”

On the other hand, in the digital age, when anyone can slap a beat together, the question is, how do you get paid for production in a region like the Bay, whose rap suffers the twin neglect of corporate radio and major labels? With the decline in album sales, rappers out here derive their music income chiefly from live performances, an option unavailable to producers.

Despite their undeniable artistic impact, the Mekanix today find themselves in a tiny East Oakland studio not far from the Garage where it all began.

“We can’t go outside without somebody playing our music,” Dot says. “That’s cool, but it’s not that fly if your rent ain’t paid.”

“We sell beats but it’s never consistent enough to feed our families and pay our bills,” Tweed admits. “That’s why we’re putting out albums now.”

Thus the duo have made 2012 the year of the Mekanix, beginning with February’s The Chop Shop (Zoo Ent.), a digitally-released compilation of Youtube and street hits they’ve produced for various artists, with a handful of new cuts like the Yukmouth-driven title song.

They followed in April with the Go Boyz, Everything Must Go (Zoo Ent.), a “lost” supergroup project from the hyphy era (ca. ’05), featuring Kaz Kyzah (the Team), Stalin and Shady (Livewire), and Dot himself on vocals in addition to producing with Tweed. Almost released half-a-dozen times, in deals that collapsed at the last minute, the darkly comedic, Ecstasy-themed Everything destroys most Bay albums of that period and remains fresh, even if Shady especially is a far greater beast on the mic today.

Both releases, however, are merely set-up for an album “coming all the way new,” according to Tweed: The Chop Shop 2 (Zoo Ent.), due late July. With a pair of monster lead singles — “Bay Area Perspective” teaming 40, Stalin, Keak Da Sneak, and Turf Talk, and “Money” featuring a vintage verse by Mac Dre recorded at the Garage, alongside fresh contributions from Stalin, Keak, and Bay R&B phenom R.O.D. — Chop 2 is the most ambitious Mekanix project to date, its judiciously matched voices sewn together by the gradual emergence of Dot’s rapping alter ego, 4rax.

Oddly enough, 4rax has had airplay outside the Bay, largely from DJ Premier, who’s spun several tracks on his SiriusXM show, Live from Headqcourterz, over the past two years. But Dot’s only begun sprinkling the conscious thug persona into the mix locally, dropping a very Oakland video, “Kerosene,” in January.

“4rax always been there,” Dot says. “I just ain’t focused on him. But it’s at the point where, shit, we done focused on everyone in the Bay, so either I do it now or not at all.”

“We’ve laid the groundwork, but people gotta pay for it this time,” he laughs. “But we made it; we’re still here.”