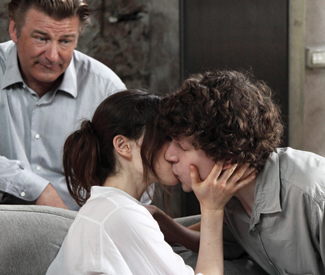 FILM Woody Allen’s film legacy is not like anybody else’s — his imitators don’t count — and is likely to grow ever more interesting in retrospect, as it becomes clear how even his (by now many) bad or indifferent movies still provided some idiosyncratic diversity in American comedy. (For the most part his few straight dramas are, face it, only really interesting as digressions from his strengths.)

At present, however, he suffers from a sense that he’s been too prolific for too long. It’s been nearly two decades since a new Woody Allen was any kind of “event,” and the 19 features since Bullets Over Broadway (1994) have been hit and-miss — the “hits” just nice rather than truly memorable, the misses landing with a soft, listless thud. Every few films there’s a heralded “return to form,” whether it’s Melinda and Melinda (2004), Match Point (2005), Vicky Christina Barcelona (2008), or last year’s Midnight in Paris. But they’re just pretty good, and no one should be surprised anymore when something as dismal as Cassandra’s Dream (2007) or Anything Else (2003) pops up between them.

Still, there’s the hope that Allen is still capable of really surprising us — or that his audience might, as they did by somewhat inexplicably going nuts for Midnight in Paris. That mild, harmless amusement had a half-developed clever concept and a snugly-fitting lead in Owen Wilson, one of few actors who’ve held on to their own personality while playing Allen’s surrogate. It was Allen’s most popular film in eons, if not ever, probably helped by the fact that he wasn’t in it — for reasons beyond the real-life distaste some have felt toward him ever since the Mia/Soon-Yi fracas. With increasing age, he’s become an onscreen liability to his own movies.

Unfortunately, he’s up there again in the new To Rome With Love, familiar mannerisms not hiding the fact that Woody Allen the Nebbish has become just another Grumpy Old Man. He has trouble making eye contact with other actors, and his fussbudgeting is now a long way from cute, well into annoying. He’s meant to annoy the other characters in his scenes, but still, there’s a doddering quality that isn’t intended, and is no longer within his control.

But then To Rome With Love is a doddering picture — a postcard-pretty set of pictures with little more than “Have a nice day” scribbled on the back in script terms. Viewers expecting more of the travelogue pleasantness of Midnight in Paris may be forgiving, especially since it looks like a vacation, with Darius Khondji’s photography laying on the golden Italian light and making all the other colors confectionary as well. But if Paris at least had the kernel of a good idea, Rome has only several inexplicably bad ones; it’s a quartet of interwoven stories that have no substance, point, credibility, or even endearing wackiness. The shiny package can only distract so much from the fact that there’s absolutely nothing inside, not even Styrofill.

Allen’s segment has him as Jerry, a retired opera director married to Judy Davis (wasted, which could be said of everyone here), reaching the Eternal City to meet the fiancé (Flavio Parenti) of his daughter (Alison Pill). He’s distracted by discovering the latter’s father (tenor Fabio Armiliato) is a superb singer — albeit only in the shower. The joke is that Jerry gets him to sing publicly … in showers. Yep, that’s the whole joke.

The other threads are, if anything, even feebler. Through inane mix-ups a honeymooning couple (Alessandro Tiberi, Alessandra Mastronardi) end up separated, paired respectively with a prostitute (Penélope Cruz) and veteran movie star (Antonio Albanese).

The relationship between study-abroad students Jack (Jesse Eisenberg) and Sally (Greta Gerwig) is complicated when her seductive actress friend (Ellen Page) shows up; Alec Baldwin plays a visiting architect who, for no apparent reason, acts as their omnipresent adviser à la the Bogart ghost in 1972’s Play It Again, Sam.

Worst of all is an utterly stupid non-story in which Roberto Benigni — who doesn’t need to imitate Woody because he’s already annoyingly mannered enough — plays an ordinary family man suddenly treated, and paparazzi-hounded, as a celebrity. There’s no explanation for this, and the presumably intended spoof of meaningless media fascinations famous-for-being-famous folk is so cluelessly handled you wonder if Allen was having a senior moment while writing it.

At the beginning a stereotypical traffic-directing polizia tells the camera directly that he sees all of Rome pass by and knows all their stories. At the end, he tells us there are plenty more where the ones we’ve just seen came from. Pretty as it’s been to look at, after 112 barely chuckle-prodding minutes of To Rome With Love that sounds very much like a threat.

TO ROME WITH LOVE opens Fri/29 in San Francisco.