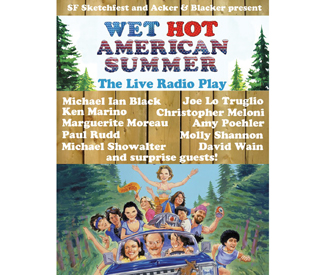 TRASH Rejected by audiences. Panned by critics. Beloved by a loyal cadre of alternative comedy fans.

Wet Hot American Summer may not have found success when it premiered in 2001, but the offbeat comedy has since become — like so many underrated flops — a cult classic.

“I’m always amazed that some critics didn’t just dislike it, they were outright hostile to it,” says David Wain, who directed the film and co-wrote it with Michael Showalter. “But those who keyed into it, whether the first time or second or third, seemed to really key into it. And for that I’m grateful.”

Those diehard Wet Hot devotees came out in droves when SF Sketchfest announced a live radio play version of the movie: tickets to the event quickly sold out. At the event, Wain will join Showalter and other cast members, including Paul Rudd, Amy Poehler, and Michael Ian Black.

“About two or three years after the film came out, people started hosting midnight screenings at various theaters around the country,” he says. “It’s very gratifying, particularly because its popularity has remained pretty consistent over the last decade, and has found new fans among people who are unaware of our work — The State, Stella — beyond that movie.”

Those who missed the sketch comedy of The State and Stella were likely the same audience members baffled by Wet Hot, a film that is gleefully strange and — past the simple premise of “last day at summer camp” — difficult to explain.

“Wet Hot does not fit into neat categorizations,” Black reflects. “It’s not a parody, it’s not a romantic comedy, it’s not a comedic homage. It has its own thing, its own sensibility.”

“It was kind of awkward because neither of us had ever been with another man before, but once we got into it, it was fine,” Black recalls. “I thought, ‘Oh, this is pretty much just like making out with a girl, only with a dick.'”

Because Wet Hot is the kind of movie fans watch and rewatch endlessly —something I can attest to from personal experience — those attending the live show probably have a pretty good idea of what to expect. Still, Wain promises a unique theatrical experience.

“We’ve gathered much of the original cast and many other awesome comedy folks, and we’ll have a live band and we’ll do an audio version of the movie,” he says. “Should be a blast!”