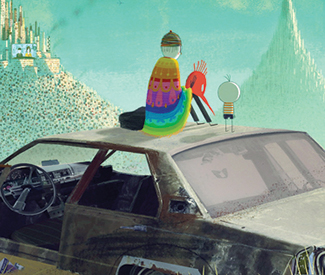 MILL VALLEY FILM FESTIVAL One of the Mill Valley Film Festival’s signature if under-celebrated programs is its long-running Children’s FilmFest, which lets families enculturate their offspring with an annual sidebar of movies from around the world — non-English-language ones given live translation for those viewers not yet up to reading text at the speed of subtitles. There’s always some animation in the mix, and this year, in addition to several shorts and the French-Belgian 3D feature Minuscule: Valley of the Lost Ants (which was unavailable for preview), two titles measure the form’s state-of-the-art across a span of nearly 75 years.

The golden oldie, offered in a free outdoor screening at Old Mill Park Oct. 10, is 1941’s Hoppity Goes to Town — the second and last feature from Fleischer brothers Max and Dave, still best known for their cartoons starring Betty Boop, Popeye, and Superman. (The beautifully designed latter remain the movies’ most faithful representation of the original comic books.) Despite those successful series, the siblings were increasingly dogged by bad luck, internal friction, studio inference, corrupt accounting, and other factors. After Walt Disney waded into feature animation with 1937’s spectacularly successful Snow White and the Seven Dwarfs, the duo followed suit, uprooting their entire organization — and nearly quadrupling its size — to make 1939’s Gulliver’s Travels in the cheaper environs of southern Florida. Nonetheless, that film cost a fortune, ultimately losing money despite its healthy box-office performance. No friendly competitor, Disney purportedly snapped after seeing it, “We can do better than that with our second-string animators.”

Their precarious financial position made worse by a deteriorating personal dynamic, the brothers nonetheless moved forward with Hoppity (originally called Mr. Bug Goes to Town), an original story penned after they failed to win the screen rights to Maurice Maeterlinck’s The Life of the Bee. Its hero is a happy-go-lucky grasshopper who tries his best to relocate the insect residents of “the Lowlands” when their community is threatened by rising foot traffic — a broken fence has made this tiny patch of urban green a destructive shortcut for oblivious human beings. He also battles villainous Mr. Beetle for the hand of bee ingénue Honey.

Partway through production, debt forced the Fleischers to sell their studio whole to distributor Paramount, which kept them on under humiliating circumstances — they could be fired from finishing their own film at any moment. Its release delayed to avoid competing with Disney’s Dumbo (1941), the film finally opened on Dec. 5, 1941, exactly two days before Pearl Harbor threw the nation in a state of shock.

Hoppity never recovered from that ill fortune, falling into the public domain after its copyright was allowed to expire. As a result, it was seen for years mostly in low-quality copies by budget distributors. It’s not a great movie. The Fleischers’ antic strengths were best suited to the short format; the sentimentality and melodrama then required for a family feature came much more naturally to Disney. But it still merits the cult love gradually earned over subsequent decades, notably for then-innovative multiplane “3D” backgrounds that add a vertiginous depth to the contrasts in bug-vs.-human perspective.

One wonders what the Fleischers might have wrought if given the artistic and commercial freedom apparently enjoyed by Brazilian Alê Abreu on The Boy and the World — one of those extremely rare animated features these days that feels entirely handcrafted and personal, no matter how many umpteen illustrators and technicians get credited in the final credit crawl. This dialogue-free adventure finds a stick-figure tot wandering from his rural home in pursuit of the father forced to look for work in the distant city. The closer our wee protagonist gets to “civilization,” the more dehumanizing and nightmarish what he witnesses becomes.

One wonders what the average under-12-year-old would make of a movie that scarcely shrinks from blunt sociopolitical indictment: Its innocent’s journey encompasses militaristic fascism, garbage-foraging poor vs. infinitely privileged rich, empty consumerist distraction, and the death of traditional indigenous life. Nonetheless, this parabolic parade of injustices never feels too didactic because of the dazzlingly varied execution. Alê draws on everything from modernist painting masters to collage and (briefly) live action footage in a visual presentation that grows ever more complex and intoxicating. (Fans of Brazilian roots music will find the soundtrack by Ruben Feffer and Gustavo Kurlat equally thrilling.) The term “masterpiece” gets thrown around a little too easily, but it’s hard to think of a recent animated feature more deserving of the term than this imaginatively ambitious yet refreshingly intimate one. *