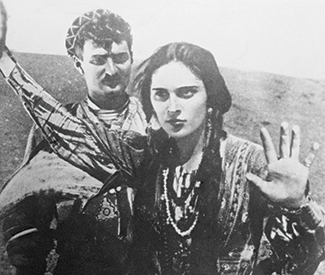 FILM Spanning nine months of programs and a full century of cinema, “Discovering Georgian Cinema” is the kind of ambitious exhibition that reminds us how much of film history is yet to be written. The series, presented by the Pacific Film Archive, represents a remarkable feat of coordination: Its opening weeks feature prints from Toulouse, Berlin, New York, Tbilisi, and, most delicately given recent history, Moscow.

Building upon a core collection of Soviet-era Georgian films held by the PFA, curator Susan Oxtoby organized the program around three periods: the silent era, the art cinema explosion of the 1950s through the 1980s, and the contemporary scene. While many titles will be unfamiliar even to dyed-in-the-wool cinephiles, echoes and premonitions of broader trends in international cinema abound. To take only one example, series opener Blue Mountains (1984) seems to draw upon Jacques Tati while at the same time anticipating the New Romanian Cinema in its elegant formalist satire of state bureaucracy. But then perhaps the ultimate lesson of a series like “Discovering Georgian Cinema” is that every New Wave renews some earlier illumination.

SF Bay Guardian What was the genesis of your work on “Discovering Georgian Cinema”?

Susan Oxtoby The genesis for the project really comes from the fact that BAM/PFA holds an important collection of Soviet Georgian films — 37 prints in total. Individual films have shown in different contexts, but we haven’t done a major Georgian series in many years. In 2011 I received a curatorial research grant from the Andy Warhol Foundation for the Visual Arts to travel to other archives with significant holdings, and then we raised funds for a touring series from the National Endowment for the Arts. We invited Nino Dzandzava, who is currently working at the National Archives of Georgia, to visit Berkeley to examine our collection. Viewing prints with her was a wonderful experience because she could supply me a sense of the history behind these films and the connections between them. There was also my visit to the Tbilisi International Film Festival, which was extraordinary in terms of getting a sense of the current film scene in Georgia and having an opportunity to meet with contemporary filmmakers.

SFBG Was it always your intention to be linking the historical films to more contemporary work?

Oxtoby Absolutely, I think it is very important to see the contemporary era in light of the history of Georgian cinema. It’s quite evident that young filmmakers working in Georgia today are aware of their country’s film heritage.

SFBG Can you talk about some of your priorities in trying to create a context for a national cinema?

Oxtoby My priority is to show strong examples of what has been created in Georgia within an art cinema tradition. Over the course of the retrospective we will spotlight numerous directors and have a chance to examine their individual film styles. We launch the series with two guests from Tbilisi, veteran filmmaker Eldar Shengelaia (The Blue Mountains, 1963’s The White Caravan, 1968’s An Unusual Exhibition), who will present his own films plus his father Nikoloz Shengelaia’s Twenty-Six Commissars (1928); and Nana Janelidze, the executive director of the Georgian National Film Center, who is herself a filmmaker (2011’s Will There Be A Theater Up There?!, 1985’s The Family) and screenwriter (1984/1987’s Repentance). In October, film historian Peter Rollberg will join us to speak about Georgian films from the silent era, and archivist Nino Dzandzava will present a program of Georgian Kulturfilms from the early 1930s. In mid-November, Levan Koguashvili (2010’s Street Days, 2013’s Blind Dates) will be our guest.

SFBG The silent films in the series that I’ve seen are quite striking in the way they refigure elements of Soviet filmmaking. A film like Eliso (1928) has such strong elements of montage.

Oxtoby Yes, that’s true. We will present Eliso with a newly commissioned score adapted from traditional Georgian folk songs by Carl Linich and performed by Trio Kavkasia on October 25 and 26; this will be a truly unique way to experience this beautiful silent era classic presented with choral accompaniment. The silent era films by Ivan Perestiani, Mikhail Kalatozov, Nikoloz Shengelaia, Lev Push, and others are absolutely wonderful. There’s also an interesting short 40-minute silent film called Buba (1930) by Noutsa Gogoberidze, which we will screen on November 8. She was traveling in the same circles with Dovzhenko and Eisenstein and collaborated with the avant-garde painter David Kakabadze, but her work was not endorsed by the Stalin regime and so she was more or less written out of film history. Her film is a bit like Buñuel’s Las Hurdes (1933), made a few years later.

SFBG Were there any other films that were especially surprising to you in terms of style or theme?

Oxtoby Oh yes, many. Little Red Devils (1923) could be a Douglas Fairbanks film; My Grandmother (1929) is Dadaist in character and very fresh stylistically. Then there’s a film like Nikolai Shengelaia’s Twenty Six Commissars (1932), which deals with the geopolitics of the oil fields in Baku — its political concerns might have been pulled out of today’s news headlines. I’m intrigued to see the influence of Italian neorealism on such films as Magdana’s Donkey (1955), Our Courtyard (1956) or even the contemporary work Susa (2010), as well as the influence of the French New Wave on Otar Iosseliani’s films from the 1960s. I want to hear more from the filmmakers and historians as to how much back and forth there was during the Soviet era. How much world cinema was being seen in Tbilisi? How much were filmmakers traveling abroad and seeing things at festivals? One definitely senses a strong connection with international cinema when you watch these films from Georgia. *