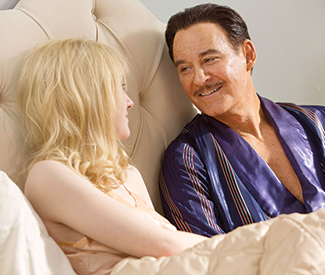 FILM For years Errol Flynn was considered the definition of a born movie star — as opposed to being a born actor. The definitive Robin Hood, he was athletic, debonair, good-humored, and terribly good-looking in a two-decade career of mostly formulaic action and adventure films. Few were under the illusion that he deserved better material. Indeed, he became something of a joke, first for the limitations of his acting, then for movies where he seemed to be winning World War II single-handedly, and at last for being an alcoholic has-been who chased every skirt in town.

When he died of a heart attack in 1959 at age 50, the floodgates of scandal opened wide. It was revealed that his lover of recent years had been underage, and the press suggested she’d been pimped to him by a monster “stage mother.” The posthumous publication of Flynn’s autobiography My Wicked, Wicked Ways — shockingly frank by the standards of the time — only heightened an overly-well-lived life’s lurid afterglow.

That somewhat pathetic final chapter is dramatized in the latest by Richard Glatzer and Wash Westmoreland, the directorial team who made the nearly perfect indie Quinceañera (2006). But The Last of Robin Hood turns out to be one of those movies that should be great, given the material and talent on tap, but instead falls flat for nearly intangible reasons. Bad movies are easy to dissect; it’s harder to suss why an almost-good one just misses the mark.

The restless son of a respectable family in Hobart, Tasmania, Flynn globe-trotted doing odd jobs until his looks and vivacity inevitably drew him into acting. He landed at Warner Brothers in 1935, and last-minute replacement casting as swashbuckling Captain Blood that year got him abruptly promoted to stardom. He was pretty terrible — but also a sexy beast who clicked onscreen with subsequently-recurrent co-star Olivia de Havilland. Less of a fan was Bette Davis, with whom he acted twice in period romances. But even that tough broad considered him “utterly enchanting” despite mutual antipathy. Flynn flourished in a series of Westerns, war movies, and exotic adventures, until audiences tired of his ever-more routine exploits — and the highly public roué reputation that ballasted them offscreen. In 1941 he was acquitted of statutory rape, but public opinion judged differently.

At the end of his drug- and drink-addled tether some 15 years later, Flynn met aspiring dancer-singer-actor Beverly Aadland. According to this film’s version of events, he’d already seduced her before realizing that she was actually just a very precocious 15-year-old — carefully groomed to look older (and given a fake birth certificate) by Florence Aadland, a onetime dancer who projected her own ambitions on her daughter. Instead of backing away, however, he carried on their affair, providing a cover for his “protégée’s” constant companionship by making sure Mom was along as public chaperone.

When Susan Sarandon’s Mrs. Aadland realizes that in private their relationship is hardly innocent, she’s furious. But she’s vain and flattered enough to fall for the star’s charm offensive — no matter that no one aside from these two think Beverly has any real talent. The only role of note she ever played was in 1959’s Cuban Rebel Girls, the almost unwatchably bad cheapie that constituted Flynn’s final screen appearance and was released just after his death. It’s a ludicrous film, but she doesn’t exactly rise above the material.

Nonetheless, Flynn (Kevin Kline) and the junior Aadland (Dakota Fanning) are, as portrayed here, tied together by something more than mutual exploitation. It may not be true love, but it’s as close as a relationship between a rapidly aging sex maniac and a teen eager to get out from under mom’s thumb can be.

Kline is a resourceful actor whose characterization is ingenious and layered. But it still falls into that category of celebrity impersonation, which always feels a bit like a clever stunt. He’s somewhat upstaged by Sarandon, who gobbles up the spotlight here as if this were The Florence Aadland Story. Given one of her more substantial roles of late, Sarandon revels in being a bit frumpy, grasping, and middlebrow; she’s a classic Hollywood type, the perpetual margin-dweller still capable of being dazzled by proximity to a star. To the extent that it works, The Last of Robin Hood does so largely because Sarandon nails the comedy and pathos of terminal celebrity aspiration.

The extent that it doesn’t can at least partly be blamed on Fanning, a limited child actor turned limited young-adult one. Though she just turned in an solid performance in Kelly Reichardt’s Night Moves, here she’s back in her usual mode of dully earnest empathy for a character that (like her Cherie Currie in 2010’s The Runaways) could/should have had considerably more depth. The precocious poise the real Aadland exhibits singing “All Shook Up” for Groucho Marx on TV’s You Bet Your Life (a clip preserved on YouTube) is more than sallow Fanning’s victimized take can manage. Despite all canny costuming here, she never suggests an allure that might have lastingly turned the head of a man who could have any starlet or fangirl he chose.

The Last of Robin Hood also feels constrained budget-wise — perhaps financing woes explain why it took the co-directors so long to follow up the well-received Quinceañera — and while you can get the heady mixture of glamour, melancholy, barbed humor, and romance that the writer-directors were going for, it always falls a little short. As with so many Hollywood biopics, a great real-life story feels diminished onscreen, the legend still more potent than the dramatized re-creation. *