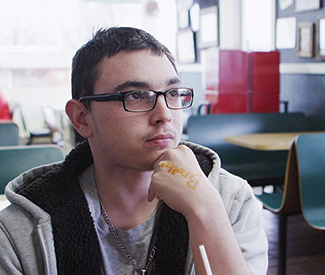 FILM Richard Linklater’s Boyhood is so popular that by now it’s acquired the seemingly inevitable backlash against such overwhelming critical support — god forbid “the critics,” that mysterious, possibly secret-handshaking Masonic elite, should tell anyone what to think. It’s a lucky movie that invites hostility by being so widely (and, admittedly, a bit hyperbolically) considered a masterpiece. Whatever your parade, someone will always be dying to rain on it.

Everyone should go see Boyhood, ideally with expectations kept low enough that they won’t feel betrayed by its admitted, even flavorful flaws. But meanwhile, everyone should also see two movies that open at the Roxie this Friday. Equally striking portraits of male adolescence, they couldn’t be more different in nearly every respect, but both are completely enveloping.

Documentarians Andrew Droz Palermo and Tracy Droz Tragos’ exquisite Sundance Grand Jury Prize winner Rich Hill spends some months in the company of three boys living in particularly problematic circumstances in the depressed titular Missouri small town. The future doesn’t look bright, but then their present is already pretty bleak. Harley is a rather thick teen with serious anger-management issues (and an ominous fondness for weaponry) who’s fallen into the weary care of his grandmother. His mother is in prison. When we learn why, it explains a great deal about why he always teeters on the edge of violent rage.

The younger Appachey, barely adolescent but already dropping f-bombs like a cranky Teamster, lives in chaotic near-squalor with his mother and junior siblings. Ma is no shrinking violet either, and one is tempted to blame his state of perpetual hyperactive tantrum on bad parenting. But she’s doing the best she can — her own dreams long ago scotched by having kids way too young, now working multiple crap jobs to support the brood with no father in sight. Of course their house is a mess. Stuck in a hamster wheel of even more basic daily obligations, where would she find the time or energy to clean?

You can tell the filmmakers’ favorite is Andrew. How could he not be? The adorable 14-year-old is an oasis of faith and positivity despite the shitstorm of bad luck life’s already dealt him. His mother seems murkily incapacitated mentally and physically; his father is a genial layabout who can’t hold onto a job, or housing, for very long. Worse, he doesn’t seem to grasp that those things are his responsibility. So Andrew is the default grownup. (His situation is eerily similar to that of Tye Sheridan’s fictive character in David Gordon Green’s underseen 2013 Larry Brown adaptation Joe.) “We’re not trash, we’re good people,” he says at one point, though one imagines his hapless, transient family might be regarded as the former by some of Rich Hill’s more respectable 1,393 citizens. (We see them on display in a Fourth of July parade, and at an annual auction where donors bid up to the thousands for a home baked charity pie.) Later he rationalizes continued dire straits by musing, “God must be busy with everyone else,” a statement of dogged hope rather than bitterness.

Rich Hill is more beautifully crafted, notably in the realm of Palermo’s gorgeous cinematography and Nathan Halpern’s musical scoring, than documentaries are supposed to be these days — as opposed to when you could get away with staging some elements for “atmosphere” and “greater truth.” (Check out such arguably nonfictive past Oscar contenders as 1957’s On the Bowery and 1966’s The War Game.) The lyricism never seems forced, however. This is a movie about young American lives orphaned by globalization and trickle-up, among other factors — the kinds of small-town heartland existence they were born into has already been written off as unprofitable.

Bernardo Bertolucci’s Me and You is this once-towering director’s first feature in over a decade spent sidelined by crippling back pain. But it’s also his best since at least 1990’s The Sheltering Sky, despite some limitations to the material adapted from Niccolò Ammaniti’s novel. Though he no longer works with Vittorio Storaro, the extraordinary (if allegedly over-perfectionist) cinematographer of his acknowledged classics (1970’s The Conformist, 1972’s Last Tango in Paris, 1976’s 1900, 1987’s The Last Emperor), there’s a hypnotic, poetical mastery of the visual medium here that Bertolucci’s sketchier post-prime projects seldom approach.

In some respects, it’s a flashback to 1979’s cultishly adored, popularly reviled Luna, again mixing up awkward male adolescence, heroin addiction, and diva behavior. Lorenzo (Jacopo Olmo Antinori) is a more-than-usually withdrawn teen, perhaps due to major acne and his parents’ separation. When the mom he’s exhausting with his attitude (Sonia Bergamasco) sends him off to ski camp, he quails at joining so many prettier peers. Instead, he sneaks back for a week of blissful solitude in their apartment building’s conveniently well-supplied basement.

This curmudgeon’s idyll, however, is interrupted by another fugitive. Lorenzo’s older half-sister Olivia (Tea Falco) is a decadent wild child temporarily out of allies, and horse. She needs a place to crash and withdraw. Yelps that he’d prefer being alone don’t get pimply Lorenzo very far, as Olivia is “not exactly dying to be in this craphole.” She’s here because it’s her only option.

Bertolucci embarrassed himself with a couple of later movies (1996’s Stealing Beauty, 2003’s The Dreamers) in which he seemed a stereotypical old artiste ogling young flesh. Me and You doesn’t go where you might expect, but neither do its characters develop in otherwise sufficiently surprising or revealing ways. Once they’re trapped in the basement, the movie remains fascinating, but the fascination is all directorial rather than narrative. It’s a master class in execution with a definite minor in content. But sometimes sheer craft is a thing you can sink into like a shag carpet. Me and You is the kind of film you just want to roll around in, luxuriating in its plush pile. *

RICH HILL and ME AND YOU open Fri/22 at the Roxie.