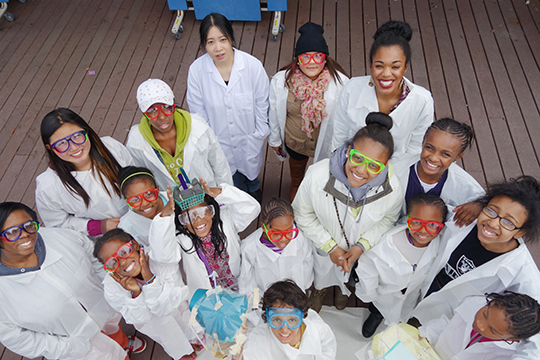 Tammie Jean Bellinger had been unemployed for 14 years, and when she was 48, she decided to enter the tech industry. “My son told me that if I wanted to start my life over, I should do it in San Francisco,” Bellinger said. “He said no one would notice my age, or anything about me.”

Bellinger, however, wasn’t setting her sights on the software or programming sectors but rather biotech, where female representation in major companies like Genentech is now over 50 percent, according to Fortune. In 2010, women held 46 percent of all positions in the biological and life sciences. A far cry from the frat boy image often associated with tech, things are different in the science-based field that tinkers with the building blocks of life.

First, though, Bellinger needed a way in. She found it at City College of San Francisco’s Bridge to Bio program, which accepts students who have no prior background in science. And it’s affordable. In-state students pay $46 per unit at City College, far below the $3,000 price tag for a full semester at San Francisco State University. Bellinger found herself learning alongside an eclectic mix of former school bus drivers, cooks, ballerinas, and bartenders. Many were female, people of color, and over 30.

Before long, Bellinger found herself completing internships in science labs where she cataloged human tissue, urine, and blood samples for cancer research.

“I know it sounds stupid, but a light bulb went off. My whole family has been affected by cancer,” Bellinger said. “I’ve been that family member. The doctor is on the other side, and there’s nothing you can do. I just hope that the person reading the tissue has as much passion as I do. That’s all I want.”

When Bellinger went to look for jobs, she was concerned about her age, but her worries vanished when she was offered a lab tech position at Genomic Health. “Biotech is different. Pretty much all … the recruiters are all women,” she said. “My knowledge is all new. If I talk the talk, and walk the walk, and it’s all updated, they’ll take me in.”

But even now, she has trouble seeing herself as a scientist. “I feel like an artist,” she said. “If you can stain a perfect nuclei and bring that cell to life when they’re performing cancer treatment, that’s kind of an art. The tissues come alive. They tell a story.”

Bellinger wants all young girls to see themselves as future scientists. This September, she’s going to start a program called Tech Bridge for those in the Livermore area. With a coral reef she built with her son, she’ll teach the Livermore Girl Scouts how to test water and play around with nitrates.

Tech Bridge is mirrored after Nexgene Girls, launched by Bridge to Bio graduates Jeanette Wright and Marlena Jackson. Through Nexgene Girls, young girls in Bayview-Hunters Point complete internships where they work alongside professional scientists and conduct their own experiments, like extracting DNA from bacteria in the salt marshes of Heron’s Head Park. By 2015, Nexgene Girls is looking to take a science field trip to Botswana.

Before Jackson became a scientist, she drove a school bus. In Hunters Point, where she grew up, breast cancer rates among women under age 50 are twice above average.

“I looked around and I thought, ‘I’ve got to do more’,” Jackson said. “You look around at the divisions in Bayview Hunters Point, and science seems like a way you can really change the community. My mother survived breast and cervical cancer. I know the power of medicine.”

After graduating from Bridge to Bio, Jackson got a job at Genentech in 2006. At that time, there weren’t many African Americans employed by the company. “I looked around, and I realized there weren’t many women that even looked like me,” she said. “That was how I started thinking about how I could go and give back to my community. I wanted to inspire young women to see themselves differently.”

Now, when young girls complete NexGene Girls programs, Jackson said, they have a different perception of what a scientist looks like. “They come in with the perception that a scientist is a guy, and he’s white,” Jackson said. “But when they’re done, and they’re asked to draw a scientist, they draw a girl. They’re not even drawing a woman. They’re drawing themselves.”

While Nexgene Girls focuses on inspiring young girls, another women-led biotech organization in the Bay Area — part of a larger, national network — is Women in Bio. For them, the mission is not to introduce more women to biology-related fields, where women already make up a substantial percentage of the workforce, but to bring females to leadership positions. Of the 18 Bay Area life sciences companies that had gone public since the start of 2012, women made up only 12 of the 129 board posts. Ten of the companies have no women on their boards.

Chris Meda, now CEO of medicine consulting firm RxDxLink and the chair of the San Francisco Chapter of Women in Bio, found herself struggling to find female mentors when she entered the industry 30 years ago. “If you look at my resume, you can see how many companies I’ve worked for. I wasn’t willing to wait around. If they didn’t want to give me the opportunity, I would find someone that would,” she said.

Now, her mission is to mentor young women through Women in Bio, which also runs monthly programs including workshops to help women network, start their own companies, and gain technical skills.

Others, like Sunny Allen, have found their bridge to biology outside of the industry and within DIY bio hackerspaces, like BioCurious in Sunnyvale. That’s where Allen learned how to make algae glow in the dark.

“I’m the poster child for the kind of girl all these STEM programs are trying to reach,” said Allen, who grew up in Kentucky. “In the seventh grade, I fell in love with the micro-science world. I wanted to be a marine biologist. I applied for this magnet school for high school. I got in. But then I hit a wall. I got kicked out of the program, and I thought, ‘This is too hard for me. I can’t do it.'”

Later, she fell for a programmer and followed him to the Bay Area, where she felt alienated by the male “brogrammer” culture. “You have guys making six figures and taking Adderall to see who can code the most,” Allen said. “And they have these girlfriends who aren’t programmers, because most girls aren’t programmers. Suddenly there’s this imbalance of power. Women take care of them like infants. They’re like coding monkeys.”

But at BioCurious, she said, it was different. “Out there, I finally felt like I could do something. Biology is accessible tech for women,” she said. “For me, what really happened was that a lot of succeeding in biology is not dependent on being able to do the problem sets, like the physics and the math, but a lot of it is reading comprehension. I could get in.”

She soon launched Biomonstaaar, an open source bioreactor project (a bioreactor is an engineered system that supports a biological environment). She now lives in a hacker house in Sunnyvale and has big dreams of escaping the service industry through the world of robotic sex toys. Indeed, she’s now the creative director of a yet-to-be-named robotic sex toy company with a launch date three weeks away and a crowdsourcing campaign on the horizon. She’s in charge of testing the sex toy, and critiquing it. The other two scientists involved are men.

“They needed a woman’s touch,” she said.

Jihyun Moon is another female scientist who found her place in biology through DIY bio roots. When Moon saw an advertisement calling for scientists who might like to help make a glowing plant, she signed up.

Now, she works at the Glowing Plant Project, a controversial endeavor that uses synthetic biology with DNA laser printing to create plants that glow in the dark. The project raised more than $450,000 on Kickstarter and drew national media coverage, becoming the focal point of a debate over DNA modification. The bioengineered plants are expected to ship later this year. “I’m the scientist here,” Moon proclaimed from her lab in SoMa. “I make DNA.” Her job is to take the enzyme genes from fireflies and marine bacteria, and put those pieces of DNA into plants.

Moon says that as far as she’s concerned, DIY bio is the gateway to biology. For other women, biology is the door to biotech. And that’s the door to a whole lot else.