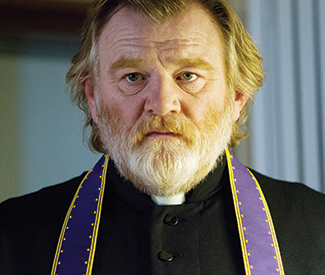 FILM While I’m sure they don’t enjoy being lumped together — one imagines them ornery, if not just bratty — the brothers McDonagh share an extremely like-minded sensibility. Not least among numerous overlaps is possessing the kind of talent that is undeniable and suspect. Just because they’re frequently as clever as they think they are, need they be quite such show-offs about it?

Martin McDonagh first got attention with a series of plays (including The Beauty Queen of Leenane, The Cripple of Inishmaan, and The Pillowman) that startlingly dragged traditional Irish drama toward Grand Guignol. Were they gratuitously or brilliantly cruel? Either or both, perhaps depending on the quality of the production you saw. He made his feature debut as writer-director with the insanely self-conscious yet delightful comedy-caper bloodbath In Bruges (2008). His 2012 exercise in auto-arse-kissing smartypantsery, Seven Psychopaths, might’ve struck you as insufferable (my vote), or the funniest hired-gun movie since Boondock Saints (1999). Notable trivia: Mickey Rourke dropped out of that movie, getting replaced by Woody Harrelson, because he thought McDonagh was a “jerk-off.” When Mickey Rourke thinks you’re a dick … well, you’re definitely something of a world-class nature.

It starred Brendan Gleeson — a significant Irish national resource both McDonagh siblings have made regular use of, as a willfully perverse small town cop who takes infinite pleasure flummoxing the tightly wound FBI agent (Don Cheadle) he’s forced to investigate an international drug-smuggling ring with. Endlessly acerbic, spectacularly scenic, The Guard is so pleased-as-punch with itself you might occasionally wish to punch it. But Preston Sturges was also conspicuously delighted by his prancing-prize-pony of a mind, which didn’t make its cavorting any less delightful to others.

Gleeson and John Michael are back with Calvary, a film just as good, if yea more suspect for crimes of excess facility — especially because this time he’s being serious, at least sorta kinda. This McDonaugh’s flippancy is of the kind that makes you wonder whether he’s even capable of really giving a shit about anything, in part because he occasionally fakes it so well.

Father James (Gleeson) is the discreetly gruff moral center of a coastal Irish hamlet that surely would have none otherwise. His parishioners, living in some glossy tourist advertisement whose quaint authenticity looks polished beyond belief (or an actual native’s budget), are all skeptics, heretics, nonbelievers, and blatant sinners. They take particular pleasure in ridiculing the uprightness of this one man no one has a legitimate gripe against, save resentment.

There’s self-assigned upscale town slut Veronica (Orla O’Rourke), having a possibly kinky affair (among many) with handsome Ivory Coast émigré Simon (Jim Jarmusch regular Isaach de Bankole), while husband Jack (Chris O’Dowd) claims bored indifference. Cynical Dr. Frank (Aidan Gillen) is seemingly hardened to suffering by all he’s witnessed in the hospital operating room. Michael Fitzgerald (Dylan Moran) is the new lord of the local manor, a disgraced but as-yet-unjailed predatory financier who toys with holy forgiveness as he might any other asset his filthy millions could acquire.

Lower on the totem pole, troubled youth Milo (Killian Scott) wonders whether to kill himself, somebody else, or both — a dilemma shared at least partially by nearly everyone here — just to feel something. A life-sentenced serial murderer once in his flock (Domhnall Gleeson, son of Brendan), a glib superior (David McSavage’s Bishop), a hopelessly shallow apparent successor (David Wilmot’s Father Leary), and others all seem to enjoy a little too much making Father James writhe on the skewer of his historically very guilty institution’s making. Rare exceptions are a French tourist (Marie-Josée Croze) widowed by a needless traffic pileup, and his own daughter Fiona (Kelly Reilly), a perpetual train wreck come home to the daddy she says abandoned her for God just as his wife/her mother abandoned them both for terminal cancer.

As if all this weren’t enough already: At Calvary‘s start, an unseen confessor tells James he was abused for years by a (now-dead) Catholic priest, and as recompense will kill his current, admittedly blameless confessor in a week’s time. Just for, y’know, catharsis or whatever.

That’s a setup narrative, to say the least. It would appear entirely, absurdly skewed if not for the gravitational center Gleeson provides. He single-handedly provides the sincere if faint hope of redemption in a scenario that otherwise provides every possible indication of damnation for all. It’s hard to imagine another actor doing as much so well, with so little apparent effort, under circumstances of such manipulative high contrivance. Basically every scene here is a beautifully staged theatrical dialogue angled toward a shocking revelation. Calvary centrally addresses the question of faith while ultimately dodging the answer. I’d appreciate McDonagh’s ambivalence more if he weren’t quite so pleased about it. He’s got extraordinary taste, no doubt — from its editorial pace to its costume and soundtrack choices, this movie is curated within an inch of too-much-ness. Beyond his understandable disillusionment with the Catholic Church’s crimes, does he truly care about morality, or is it just an authorial chew-toy?

Calvary is so cannily crafted and acted, many will shrug off such quibbles, deciding the film’s brilliant surface actually means something, or at least deliberately implies myriad meanings. But this McDonagh, like the other, feels like a genius attention-seeker whose impersonation of depth cannot be trusted. I doubt him — as many characters here do God — right down to the last fate-intervening inspiration of an ending that won’t leave a dry eye in the house. Nor should it, dammit. *