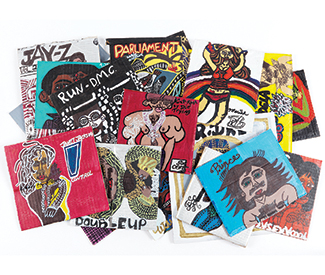 VISUAL ART So far, 2014 has been a pretty depressing and demoralizing year for Bay Area artists and the organizations and institutions that support them. Increasingly, the only options seem to be “fight or flight,” with “flight” too often becoming the default.

Against the economic and cultural ascendancy of the tech industry, commercial and residential rents have skyrocketed as funding sources have become more restrictive and competitive. Longstanding commercial galleries and noncommercial spaces alike have been forced to relocate, downsize, or face eviction. The past few months, my Facebook feed has reliably been filled with mournful think pieces on tech’s perceived indifference to local arts and culture, news of another gallery closure, or someone else posting about his or her imminent departure to Los Angeles or Chicago. For many, community stalwart Intersection for the Arts’ announcement last month that it was drastically reducing its operations and staff felt like the last straw.

This climate of mounting precariousness and frustration invariably forms the backdrop against which one takes in Bay Area Now 7, Yerba Buena Center for the Arts’ triennial survey of local art. It also spills over into some of the art on view. For this reason alone the stakes feel higher — perhaps unfairly so — especially when compared to past iterations of the exhibition, which have sometimes struggled with articulating a coherent or relevant point of view.

Curators Betti-Sue Hertz and Ceci Moss’s decision to “decentralize” the curatorial process this year and, instead, issue an open call to small- to mid-size regional visual arts organizations to select and commission work, turned out to be a smart one. For starters, putting YBCA’s institutional resources and clout behind much smaller organizations as opposed to individuals proposes an alternate function for large-scale, regional surveys such as Bay Area Now, beyond the early-to-mid-career professional stopover-launching pad they serve as for many artists (the Whitney Biennial continues to be a best- and worst-case example of this).

The art is as varied as the organizations presenting it although many of the mediums and subjects feel indigenous. This sense of familiarity can cut both ways. Daniel Case’s gorgeous landscape photographs of empty California cruising grounds, in 2nd Floor Project’s space, seem to be having a sympathetic kiki with Tammy Rae Carland’s earlier photo series of similarly depopulated off-the-grid, lesbian feminist encampments. Kristin Faar and Jeff Meadows’ New Age-y paint and slat construction in Adobe Books Backroom Gallery’s space, on the other hand, presents a cheerful if derivative homage to the Mission School and the beloved bookstore’s place within its history.

True to its name, BAN7 is topical, and the pieces that channel the current climate of economically-fueled dissatisfaction in which so many feel priced out, kicked out, silenced, or foreclosed upon is what gives the exhibition its teeth. Taking up almost a quarter of the main gallery space, the Bay Area Art Workers Alliance’s strategically messy installation Invisible Labor attempts to stage the opposite of its title, rendering visible (as well as audible; you hear the installation before you see it) the physical labor and construction materials used to install the very art on display throughout YBCA. The names of Alliance members, many of whom are artists who also created and contributed to the installation, are pointedly writ large on the gallery’s floor-to-ceiling east-facing window.

Invisible Labor can be taken as a response to the same question asked by How Do We Make More Public the Other Work that We Do?, Edgar Mojica’s in-process collaborative mural that’s part of Important Projects’ section. Once completed, the mural — which depicts San Francisco as a sprawling technopolis — will then be re-covered by the same hands that created it, making it an “invisible monument” to the labor of all involved.

Mojica’s question has been asked a lot lately in the local arts community. One answer was proposed this past June when adjunct professors at the San Francisco Art Institute voted to form a union affiliated with the Service Employees International Union, following a similar vote by adjuncts at Mills College earlier in the same month.

BAN7, much like Invisible Labor, insists that organization and visibility can take other forms as well. This might not make this year’s triennial into an avenging David to the tech boom’s Goliath, as poet Kevin Killian casts Publication Studio in a colorfully illuminated manuscript that hangs in front of its in-house printing press. But it can provide a stage for alternate realities, such as Fong’s bedroom. And it can confront us — as it does by having pieces from the San Quentin Prison Arts Project be some of the first artworks one encounters — with other sites of struggle and resistance. As Lori Gordon exclaims in one of her newsprint Snippets, a participatory variation on Jenny Holzer’s Truisms series: “divert your eyes from the traffic accident of culture and look here instead.” *