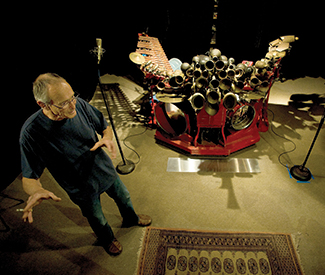 FILM Time is money, making both things usually in short supply when it comes to moviemaking. Ergo, a movie that takes forever to make is often a novelty — an extreme conceptual luxury. (On the other hand, movies that never actually get finished are probably more common than you’d expect; there’s a whole invisible history of films abandoned mid-production, usually because the money ran out.) This week sees the theatrical release of Richard Linklater’s Boyhood, an unusual and by all accounts wonderful experiment shot over a 12-year course, so its actors (particularly Ellar Coltrane’s titular youth) could grow older naturally within the story’s time span.

Unfortunately, the by-all-accounts wonderfulness of Boyhood didn’t screen in time for this particular column — necessitating an attention shift to the Roxie, which just happens to be opening a movie also shot over several years’ course. If Boyhood is obviously about life’s formative early years, Tamar Halpern and Chris Quilty’s Llyn Foulkes One Man Band leaps forward decades to that point where an individual life no longer seems to change very much. Not nearly as much as they’d like, in this case. Foulkes is a veteran of that fabled Los Angeles art scene briefly and famously (albeit mostly in retrospect) centered around the Ferus Gallery. He was such a prodigy he dropped out of the Chouinard Art Institute (now known as CalArts) to go professional, then got kicked out of Ferus for (he says) dissing another, better-entrenched resident “rebel,” Bob Irwin.

Of course, no one since approximately 1900 has ever met a “serious” painter who wasn’t also a “rebel.” After that parting of ways, Foulkes became quite a popular artist for a while via large paintings derived from vintage landscape (in particular, rocks) photography. Such popularity chafed, so he turned toward what he calls his “bloody heads” period, gory portraiture that made his “macabre edge” very plain to anyone who somehow hadn’t sussed it already. Suddenly he was no longer the US artist invited to international biennales and handed prestigious prizes. One Man Band follows him some time later (2004-2012, to be exact), when he passes age 70 with no ebbing of lust — for acclaim, that is, for the sales and exhibitions and critical raves he possibly bypassed in “going out of his way to turn his back on the proprieties of the art world,” as one bemused observer notes.

We see him prepping for shows that force him into the position he most resists: actually finishing a work. At least that’s his problem with two notable pieces. Intense surreal landscape The Lost Frontier was started in 1997. It has grown so thick in places that he’s periodically used saw and hammer to excise a section he wants to rework. It duly includes a representation of Mickey Mouse, the pop culture icon he worshipped early on (in high school he’d aimed at working for Disney), then increasingly used as the perfect symbol of all things corrupt, exploitative, and American. A gallery deadline finally forces him to sign off on it, following a typical final frenzy of tinkering all-nighters.

There’s no similar happy ending for The Bedroom Painting, aka The Awakening, which depicts himself and his second ex-wife (she wasn’t “ex” when he started it) in bed — she in a near-fetal position, alone, the very definition of neglect. “The one thing I’ve failed at in my life is being a good husband. I’m too self-centered. My marriage was falling apart, I was trying to solve it in the painting,” Foulkes says here. We hear from this wife, and the prior one — albeit so briefly and tactfully it’s as if the subject forbade the filmmakers from digging into the psychological truths his art so often bares nakedly. (That second wife mentions realizing he could “not be a nurturing partner,” a terribly polite way of describing what must have been a colossal disappointment.) His grown children also appear, fleetingly. Why does their tone invariably hit the “long-suffering” note? Viewers would like to know.

Foulkes himself is spry, petulant (“If something doesn’t happen with this show, I feel like quitting art”), quite possibly brilliant, admittedly obsessive (“My process is kind of make and destroy and make again”), random (“I think vegetables are overrated”), and self-indulgently juvenile in that way of men who once got away with it by being very handsome. (When we see an archival clip of him clowning on Johnny Carson’s Tonight Show in 1974 as part of a joke band, he looks like a delighted prankster passing among actual misfits.)

Foulkes’ proclaimed alternative second career is as a “one-man band” whose bizarre stream-of-consciousness autobiographical lyrics (sum: he’s bad with women) are accompanied by the often delightful racket of his “monkey on my back” — a massive sculptural whatzit composed of myriad cowbells, bicycle horns, and other gizmos. He’s the ultimate Incredibly Strange Music ironicist, goin’ all primitive as an art project. You can exit One Man Band thoroughly intrigued, yet still so puzzling over its subject’s overall personal history or impact on contemporary art. *

LLYN FOULKES ONE MAN BAND opens Fri/18 at the Roxie.