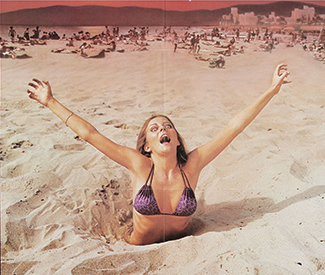 FILM There’s a T-shirt that’s achieved must-have status in record time, even though as yet it may just be an idea for a T-shirt: A picture of Al Gore gesticulating at the podium, with the words “If you don’t believe in climate change just look at San Francisco … only a few years ago that city was still cool.” Haha. Sob. The temperature drift from cool to tepid (and expensive) registers in a thousand ways, big and small, with the shuttering of cultural venues now a predictable minor-key prelude to the ka-ching symphony of condo construction.

Not yet axed, but with head positioned above the bucket, is the Vortex Room — that SOMA venue so cool you need to know the address (there’s no sign), as if it were a Prohibition speakeasy or something. Spawn of the late, beloved Werepad, the Vortex was threatened with eviction last fall. After a few months of legal skirmishing the landlord backed down, but then served notice again not long afterward. “We are currently fighting it out in, I guess, a battle of resources. They appear to just want to wear us down. This new real estate marketing is just too tempting, I suppose,” says founder Scott Moffett.

Aptly, July’s Film Cult series at the Vortex takes as its theme “Bad Vibrations.” The bounty of five Thursdays this month allows plenty of room for programmer Joe Niem to mine a collection of largely 16mm exploitation obscurities in which “Summer is spelled with a ‘B’.” As in, you know, bummer! — but more about that film title later.

Things kick off with a double dose of female imperilment from the golden age of TV movies. A Vacation in Hell (1979) has one would-be playa (Michael Brandon) arranging a day trip from a Club Med-type resort with four women so he can hit on the dumb blonde (Priscilla Barnes). The others are Andrea Marcovicci as Embittered Neurotic Man-Hating Possible Lesbian, Get Smart!‘s Barbara Feldon as an insecure divorcee still looking for love, and erstwhile Marcia Brady Maureen McCormick as the teenage daughter she’s dragged along as security blanket.

Upon reaching an isolated beach, their inflatable boat gets a puncture. They attempt to dither their way back to civilization cross-country, and in pure idiot panic incur the wrath of a strapping native hunter (Ed Ka’ahea) whom Marcovicci dubs “you murderous savage.” Under the silly, talky circumstances, this ABC Movie of the Week has some surprisingly good acting. Which cannot be said, perhaps thankfully, for the prior year’s Summer of Fear, aka Stranger in Our House. Fully exorcised then-telepic queen Linda Blair plays a seriously bratty SoCal teen who grows suspicious of the freshly orphaned cousin (Lee Purcell) who comes to live with her family, and who in record time goes from twangy wallflower to usurping seductress. This (eventually) Satanic thriller was the first mainstream Hollywood project for a Wes Craven fresh from Last House on the Left (1972) and The Hills Have Eyes (1977), and remains the tamest thing he ever directed — yes, tamer than Meryl Streep inspiring Harlem youth in 1999’s Music of the Heart.

Fear not, stronger meat is ahead. July 10 brings two theatrical horrors, 1980’s Blood Beach and 1976’s Who Can Kill a Child?, aka Island of the Damned. The first is a late entry in the cycle of Jaws (1975) rip-offs, which it winks at by having one character quip, “Just when you thought it as safe to get back in the water, you can’t get to it” — because something unseen is pulling Santa Monica beachgoers down screaming, right through the sand. It turns out to be an all-too-briefly seen monster in this lethargic chiller by the future director of Flowers in the Attic (1987 version, not the recent made-for-Lifetime version), with the highlight being a surprising political speech by John Saxon’s police chief about how taxpayers want the sun and the moon in city services … they just don’t want to pay for it.

Who Can Kill a Child? is something else: a beautifully atmospheric Spanish nightmare by underrated Uruguayan Narcisco Ibáñez Serrador, in which two English tourists row to a quaint village off the mainland. When they arrive, however, everyone appears to be gone save a few children — with whom something has gone very, very wrong. Quiet and slow-building, it’s a striking parable that really pays off once ominousness turns to terror at the completely irrational crisis these visitors have stumbled into. Equally memorable and shocking is 1978’s US Blue Sunshine, a tale of a government LSD experimentation that the Vortex (and the Werepad before it) has shown so many times it might as well be its filmic mascot.

The rest of the schedule is obscure even by Vortex standards. English-language 1972 Eurotrash hostage drama Summertime Killer stars Christopher Mitchum, one of two (with sibling Jim) Robert Mitchum offspring who experienced moderate movie fame — despite dad’s oddly dismissive public statements about their B-list careers. Aussie One Night Stand (1984) has New Wave youth in Sydney acting like mildly New Wave cut-ups in a John Hughes movie as they await nuclear holocaust. It’s less fun than it sounds. More fun than it sounds is 1990’s direct-to-video Punk Vacation, in which mildly “punk” miscreants slumming in the sticks wage war against local hicks.

Lastly there’s 1973’s Bummer!, a sobering film about the groupie lifestyle — even before the fat misogynist drummer no one will have sex with goes postal. Offering further proof the rock ‘n’ roll lifestyle leads to Hades is Down Beat, a feature so obscure imdb.com doesn’t know it exists. Even the few to note Christian film “pioneer” Ken Anderson’s passing in 2006 made no mention of this 1967 warning against all that was then groovy and ungodly. If and when the Vortex goes away for keeps, who will unearth such treasures for us henceforth? That’s right: Nobody. *