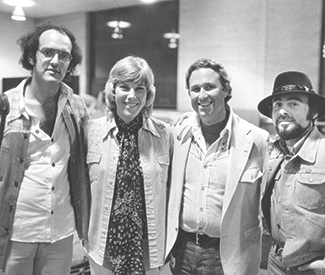 FILM Sometimes a movie can only be called a gift — a gift intended for somebody other than the viewer. Clearly a film is a vanity project if its primary intent seems to flatter its maker. But what about when it’s a love letter from one rich, entitled celebrity to another? Then the vanity grows complicated, not least by the fact that we’re expected to pay for the privilege of watching one ass kiss another.

Anyone who blinked probably missed Super Duper Alice Cooper, which mostly did just one-night showings across the nation in April. That rockumentary was duly “authorized” but awfully entertaining, with the wit to tell its original shock-rocker’s tale entirely through archival footage plus a running oral history of latter-day interviews. Mike Myers’ directorial bow Supermensch: The Legend of Shep Gordon tells the same story for its first half hour — Gordon being the “Jewish kid from Long Island” who stumbled into being Cooper’s manager, shepherding (har) him to fame with an uncanny knack for promotional stunts and image-shaping.

He eventually provided those services and more to a highly eccentric roster of talents including Wonder Bread pop thrush Anne Murray, R&B vibrator Teddy Pendergrass, and (an end-scroll informs) King Sunny Ade, Ben Vereen, Raquel Welch, Michelle Shocked, Rick James, and Frankie Valli. He co-founded Alive Films, which produced and distributed an innovative slate of indie and foreign features. Discovering that the world’s greatest chefs were “treated like shit” (?!), he had the foresight to create the whole “celebrity chef racket” in which they have reality TV shows and hawk their own supermarket products, for which we presumably must be grateful.

In a respite from bedding and occasionally marrying other “tens,” he kept Sharon Stone off the dating market for two years, for which we should probably also be grateful. She introduced him to the Dalai Lama, of whom he says, “Every time His Holiness walks into a room I feel like I’ve taken the greatest shower of my life.” (Apparently, he feels spiritually cleansed.) Dropping more names than a telephone book in a shredder, Gordon shares amusing anecdotes about Cary Grant and Steve Jobs alike. He is a wellspring of generosity who supported an ex-girlfriend’s orphaned grandchildren and secured financial stability for an elderly Groucho Marx. Meeting Myers via Cooper on the set of 1992’s Wayne’s World, he subsequently housed the famously difficult comedian turned (here) documentarian for two months at his Maui compound when the erstwhile Austin Powers was going through a rough stretch.

“He’s the nicest man I’ve ever met, hands down,” Myers gushes onscreen, while some other famous person (Michael Douglas? I forget) calls Gordon “the nexus for everybody who means anything in the entire world.”

Supermensch is a professional funny guy’s documentary, which means it can’t help manipulating things (wacky klezmer soundtrack; campy re-enactments; celebrity testimonials from Tom Arnold, Sammy Hagar, and Sylvester Stallone) in ways that beg for approval. Gordon is no doubt a great host, a good cook, a consummate cocksman, and a social and business genius. But watching this movie is like paying to see a $5,000-per-plate benefit dinner via closed circuit TV — as if it were a humbling honor to witness famous people pat each other on the back.

It’s a given here that the tragedy of Gordon’s life is his not being able to foster a biological family of his own — no matter that he’d out-bachelored many a former lover who might have realized it. “I felt really lonely for him,” says one loyal personal assistant re: the moment he woke up from near fatal surgery (cue Radiohead track “Everything In Its Right Place”) and was disappointed her less-than-gorgeous self was at his bedside. The by-association narcissism Supermensch exudes is exceeded only by the depressingly low self-esteem of she who pities a man who hasn’t yet found his impossible feminine ideal. *