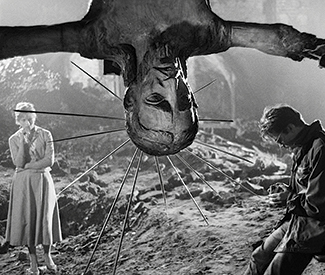 FILM Poland had not been a major hub of film production in the early decades of the medium, and its industry stabilized without getting very interesting in the years after World War II, when a Soviet-backed Stalinist regime founded state-controlled Film Polski. This shotgun wedding of art and bureaucracy wasn’t ideally conducive to creative expression, however. By the mid-1950s younger filmmakers, many graduates from the recently founded National Film School in Lodz, agitated for more independence — which, surprisingly, they won.

The resulting United Groups of Film Production almost immediately began producing work that won international attention and came to be known as the “Polish Film School” of cinema. Then in the 1970s a second wave of distinctive talents arrived, their troubled and ambivalent movies coming to be known as the Cinema of Moral Anxiety movement. Presented by Martin Scorsese, the touring “Masterpieces of Polish Cinema” retrospective playing Berkeley’s Pacific Film Archive offers 13 features spanning three decades.

The series kicks off this weekend with perhaps the most famous films by two polar (ahem) opposites of the school’s first wave: fantasist Wojciech Has and sober, socially conscious realist Andrzej Wajda. The latter sounded a new Polish cinema’s opening salvo with 1955’s A Generation, and is still at it 60 years later. Last year he continued his never-ending project of dramatizing 20th century Polish history with the biographical Walesa: Man of Hope (as yet unreleased in the US), and might yet be active when he hits 90 in 2016.

An honorary Oscar winner, Wajda has been the most imposing presence in Polish cinema for nearly his entire career, even if he’s not the nation’s most fabled cinematic son — that would be Roman Polanski, a sensibility as slippery as Wajda is solid (and sometimes stolid), as well as a director who fled to the West at his first opportunity. (Polanski made a rare return after the fall of Communism, acting the lead in Wajda’s atypical period comedy Zemsta in 2002.) The four features representing Wajda in the PFA series see his development from an edgy young voice to the master artisan of large-canvas, often polemical works on subjects of official import.

Ashes and Diamonds (1958) introduced the striking screen presence of Zbigniew Cybulski — one consciously modeled on the magnetic malcontents of James Dean, and Marlon Brando in 1953’s The Wild One — as one of two resistance fighters tasked with assassinating a Communist official just days after the end of World War II. While his partner copes with this now-pointless mission by going on an epic drunk, Cybulski’s Maciek expresses his ambivalence in distracted pursuit of a barmaid (Ewa Krzyzewska). His iconic death scene would influence many others, notably those in Godard’s Breathless and Truffaut’s Shoot the Piano Player (both 1960). The actor coped with his subsequent international stardom by doing everything to excess; there was grief but not much surprise among those who knew him when he died in a drunken fall at a train station in 1967, not yet 40 but looking much older.

He also has supporting roles in Jerzy Kawalerowicz’s 1959 slice-of-life demi-thriller Night Train, and in Wajda’s Innocent Sorcerers from the next year — both long journeys toward dawn, the second set in a jazz-soaked, raffishly disillusioned Warsaw where it’s “harder to catch a taxi than a girl.” The two other Wajda titles here are later epics: 1975’s The Promised Land, a long, lavish and shrill indictment of worker-exploitative Industrial Revolution capitalism; and 1981’s Man of Iron, dramatizing the rise of the Solidarity movement. Man won the Golden Palm at Cannes, but also angered Polish officials sufficiently to drive its director abroad for some years, making films in Germany and France.

By contrast, political — or any — reality is infrequently found in the works of the late Has, whose best films are hothouse phantasmagorias rich in surreal imagery and dreamlike illogic. The PFA series kicks off with his 1964 The Saragossa Manuscript, perhaps that decade’s first “head” film, and duly named by Jerry Garcia as his favorite film. (The musician was involved in the PFA acquiring a print before his death.) Its picaresque maze of tall stories, with beautiful available women ornamenting most of them, remains a stoner’s delight. In a similar vein, Has’ The Hour-Glass Sanatorium a decade later is a triumph of Gothic jumble-sale production design, its own hapless hero pulled down a richly colored rabbit’s hole of dress-up role playing and various perversities at the titular institution.

A much more straightforward costume extravaganza is 1960’s Black Cross, aka Knights of the Teutonic Order, about the 15th century struggle between Poles and Christian invaders that led to the Battle of Grunwald. Its director Aleksander Ford was a major figure in establishing the post-war state film industry, yet not long after this expensive epic he was purged in a late-decade anti-Semitic campaign, and his unsuccessful attempts at a career overseas ended with suicide in 1980 Florida. A very different historical piece is Kawalerowicz’s 1961 Mother Joan of the Angels, a treatment of the same 17th century alleged convent demon infestation that inspired Ken Russell’s 1971 The Devils, and one that’s as quiet and stark as the latter film is hysterical.

The leading lights of the later Cinema of Moral Anxiety movement—which mostly eschewed such grand gestures and bizarre subjects for small, disquieting modern narratives — are represented in three films toward the series’ end. Krzysztof Zanussi’s 1976 Camouflage and 1980 The Constant Factor are terse, bitter portraits of institutional corruption. The late Krzysztof Kieslowski’s pre-Three Colors series breakout A Short Film About Killing (1987) is, if anything, bleaker: Drawn together by chance and then by tragedy, its protagonists live in a Warsaw where injustice is practically in the air — thanks to the oppressively tinted cinematography — and the climactic events of a murder and an execution have their existential pointlessness underlined by each being excruciatingly prolonged. *