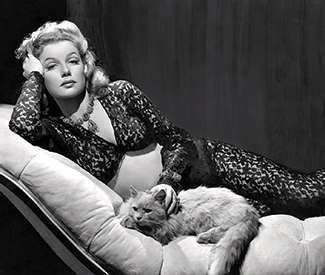 FILM Prison should be the most natural setting for film noir, as that’s where most of the genre’s protagonists are headed (if they don’t get bumped off first), and where many of them have already been. But it’s had spotty representation onscreen, with time served either skipped over in the narrative (how many pulp fictions start with a hard-luck protagonist just getting out of long-term for what’s sure to be short-term freedom?), or dominating entirely.

This spring’s edition of “I Wake Up Dreaming,” the recurrent Roxie noir showcase programmed by Elliot Lavine, has a number of notable titles dealing with the claustrophobic consequences of crime-not-paying. What’s even more notable this time around is the cross-pollination with Lavine’s other Roxie perennial, the series of Hollywood “pre-Codes” made in an approximately five-year window between the advent of “talkies” and the 1934 arrival of more rigidly enforced, censorious industry standards toward potentially objectionable content. Their peaks separated by about 15 years, pre-Codes and noirs shared a taste for hard-boiled dialogue and seamy situations, so their programmatic overlapping here feels right.

Two of the strongest entries here were released at least a decade before the arrival of anything that might legitimately be labeled noir. Daintily titled Ladies They Talk About (1933) is a rip-roaring original Women in Prison exploiter, with the inimitable Barbara Stanwyck as a moll who sashays into the hoosegow after enabling a bank stick-up. Getting two-to-five in San Quentin’s women’s ward, which here is like the world’s saltiest sorority, she quickly identifies her allies and enemies while spurning the visits of a childhood pal turned crusading DA (Preston Foster) — when she’d ratted on herself to prove “I’m on the level now” to him, he had the noive to actually charge her with the crime. That bum!

Another enduring star who came in with the sound era, Edward G. Robinson, gets all of Two Seconds (1932) to recall what got him to the electric chair — though that translates into a still-trim 67 minutes’ screen time in Mervyn LeRoy’s drama. The first half is a gem of snappy patter as the headliner and a terrific Foster play construction-worker roommates — Robinson the penny-pinching plodder, Foster the one always ready to blow his paycheck on booze, broads, and the horses. Yet it’s the former who’s taken for a chump’s ride by dancehall girl Vivienne Osborne, whose personality goes from Jekyll to Hyde the moment she’s manipulated him into an unholy matrimony. You can guess what happens — she’s already murder just to live with. As a none-too-bright lug who can’t get a break, Robinson gets a serious acting workout here, even if the climactic pre-execution Big Speech smacks overmuch of writing for Oscar’s sake.

Several rarities that verge on horror come from before and after the semi-official, immediately post-World War II noir era. Miracles for Sale (1939) was the final feature for director Tod Browning of Lon Chaney Sr. and Freaks (1932) fame. It stars Robert Young as a professional “magic” debunker investigating murders connected to an alleged witchcraft circle. Even so, this slick comedy thriller provides scant outlet for Browning’s love of the macabre.

Even less frequently revived are three early 1960s chillers: Erstwhile Incredible Shrinking Man Grant Williams plays a psychiatric patient and serial killer in The Couch (1962), Robert Bloch’s first screenplay after Hitchcock adapted his novel Psycho. The Hypnotic Eye (1960) has tall, dark, and handsome Jacques Bergerac (who married Dorothy Malone and Ginger Rogers) as a hypnotist whose prettier subjects tend to grotesquely disfigure themselves. Two on a Guillotine (1965) is a sub-William Castle gothic with the punishingly perky duo of Connie Stevens and Dean Jones having to spend an inheritance-earning week in the inevitable haunted house. They’re all terrible, but have a certain creaky charm.

Holding up very well indeed is 1949’s The Window, a rare genuine independent production of the era to achieve major recognition. As opening on-screen text announces, it’s the story of the boy who cried wolf — updated to a modern NYC tenement, where little Bobby Driscoll is testing the patience of his parents and playmates with his constant fabrications. Thus nobody believes him, of course, when he witnesses a real murder. Once his homicidal neighbors catch wind of him, our grade-school protagonist becomes prey himself. Criminal child endangerment was far from a typical story element in those days, and with its still-tense chase finale amid crumbling condemned buildings, The Window presented such a novelty that it won a (rather generous) special Oscar for Driscoll, who was usually seen in the more wholesome environs of Disney films like Song of the South (1946) and Treasure Island (1950). Yet soon after, adolescent acne would kill his acting career. Ironically echoing this famous role, the by-then heroin-addicted ex-con was found dead in an abandoned 1968 NYC tenement at age 31, his body found by playing children.

Other “Dreaming” highlights include a glossy 1947 double bill showcasing talented Warner Brothers star Ann Sheridan, the better being The Unfaithful, though Nora Prentiss has the virtue of being partly shot in SF. As sleepers go, though, two vintage “Bs” may rep the series’ best discoveries. Perhaps the program’s least likely inclusion is Angels in Disguise (1948), a later entry among the Bowery Boys’ nearly 100 juvenile hijinks. This one is a spoof of tough urban crime dramas, and a surprisingly good one, complete with shadow-heavy noir imagery and hard-boiled voiceover narration. As ever, the scene stealer is rubber-faced beanpole Huntz Hall.

From 1957, Death in Small Doses (“The picture that crosses the forbidden territory … of THRILL PILLS!”) rips the lid off amphetamine abuse among long-distance truckers, with future Mission: Impossible and Airplane! (1980) star Peter Graves as an undercover federal investigator. What makes it unmissable, however, is the supporting turn by none other than Chuck Connors (1979’s Tourist Trap, 1973’s Soylent Green) as perpetually hopped-up boarding-house hepcat “Mink.” If scene-stealing were a crime, Hall might get life without parole, but Connors would merit the chair. *