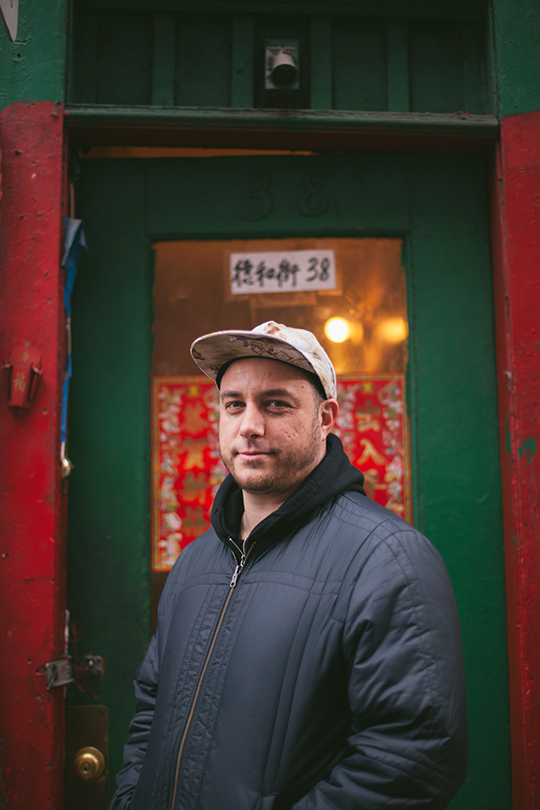 Patrick Brown, sound engineer and owner of the Mission’s Different Fur Studios, is a busy guy — both literally a man about town, as well as on the internets. I’ve started calling him the Santa Claus of social medias — always watchin’ his friends’ web behaviors, good, bad, whatever. He’s consistently first to like posts and favorite tweets, while simultaneously pulling off epic shifts in the studio.

But despite the screen-mediated chatter we had recently traded, I hadn’t actually seen the guy in months. I wanted to interview him: I hoped for secrets, opinions about the SF music biz, and other pertinent wizardry. With this in mind, I got an insider tip from his girlfriend: the promise of dim sum could usually lure him out of the studio.

Our “date” landed on Superbowl Sunday, and we happily avoided sports fans by venturing to Chinatown. Beneath red lanterns and pouring rain, we pulled up barstools at the Buddha Lounge and ordered Lucky beers, listening to “PYT” on the jukebox and watching a regular sway his hips in the doorway.

“Is that some kind of fat joke?” he asked, when I ‘fessed up to the social-media Santa nickname, as he nibbled on the bartender’s gift of microwave popcorn. It was Chinese New Year; a celebratory firecracker screeched in the street.

“I regularly spend 12 hours a day in a room. I can’t be out in the world, but I still want to exchange information out there,” he explained. Social media is his way of showing support while buried beneath work, he said. He links people to projects, and projects to people, patting the community on the back with likes and re-tweets.

In the seven years that he’s owned The Fur — he bought it from the previous owners in 2008, just four years after starting as an intern — it’s become increasingly important for him to extend his love of the music scene beyond the studio. This means showing face at venues, promoting bands, and partnering with brands that share like-minded intent.

“It’s important for people here to be building things versus bashing,” he says, noting the city’s current debate about tech and how it’s affecting the SF music scene. (Brown recently spoke to the issue while seated on a panel of music industry folks at The Chapel, seeming relatively unfazed by the complaints and quandaries.)

“This is all awfully familiar,” he says, recalling his experiences throughout the first dot-com boom — when, much like the current, monetarily-fueled tension, swarms of musicians and sound engineers left for the promised lands of LA and New York. The music biz ached with abandonment.

While things today may appear similar, he insists they’re not the same.

“The culture of San Francisco has changed, but it doesn’t mean the music business is suffering. It may mean musicians are suffering,” he says, adding that this city isn’t particularly fair to a lot of people and industries. “Sure, musicians should be able to make a living, but not everyone is gonna make it. It’s no different with sound engineers. Do you know how many interns I’ve fired? It’s really competitive out there.”

When Brown himself began as an intern at Different Fur in 2004, the SF scene was still recouping from tech deflation. Business was dry, and Brown saw opportunity in the quiet: space to learn, fuck up, and grow. It worked. He took over as studio manager three years later, and then in 2008 he bought the whole damn rig.

“I decided to stay and make my own shit,” he says. “And now I can do whatever I want. I know it sounds cliché, but it’s true.” At the time of our interview, the studio’s calendar was booked through May, sometimes double-booked. Does The Fur hog too much of his time? He scoffs.

Brown’s career path followed a nomadic, diverse education: he studied architecture in Paris, English and psychology in New York, and advertising and film in SF. He repeatedly found himself failing, bored, and planning his escape to the next shiny curriculum.

By the time art school had begun to lose its appeal, he’d begun recording a few low-key recording projects with musician friends. The needle dropped: He did a year at SF State for Music Business, following it up with two years at Ex’pression College. He was hooked.

“People always ask me if listening to the same three-minute track for 12 hours on repeat drives me nuts,” he says, shaking his head, and takes a sip of round two: a pink Mai Tai. “I love it. It was my cue — that’s how I knew I actually wanted to be a sound engineer.”

The more diverse his repertoire can be, the better: A long list of recent projects includes an Armenian classical quartet, a dance hall remix, darkwave, and a Brazilian pop group. (“They all inform each other,” he says.) Brown is also a member of the Grammy board, plays host for the Converse Rubbertracks sessions, and occasionally makes music with his buddy Robert Pera as Woof Beats. He loves throwing events, like a recent listening party for the Grouch and Eligh. His latest addition is sound consulting for GitHub, a partnership aimed at creating fruitful connections between music and tech.

To put it lightly, he’s a workhorse. The horse is, of course, the latest Chinese zodiac sign to come into its 12-year rotation and, as a 1978 baby, Brown claims stallion status. The timing is right, too, since 2013 proved rough: Steve Brodsky, one of his closest friends and cohorts, passed away, and two much-loved Fur employees gave their notice. Brown’s mood shift was palpable, the year of grieving slowly eroding his usual sarcastic banter.

But the new year is freshly upon us and there’s already a notable difference in his mood. His hooves are shiny, so to speak — geared up for the gallop ahead.

“This year I want hang time with my girlfriend…I can’t sit in front of a console for 16 hours a day,” he says with conviction, then contradicts it all by admitting he also doesn’t want to work less. He laughs. “I’m not sure how it’s going to work exactly. All I know is that I’m in a better mood about it all.”