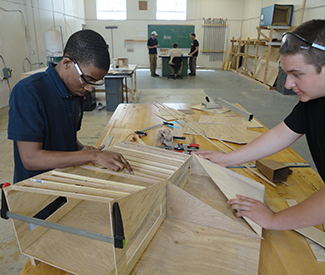 FILM Two of the most deep-rooted national-character-defining American tropes are a) that we are a profoundly self-reliant people, and b) the Horatio Alger myth that anyone can go from “rags to riches” if they have a good heart and a tireless work ethic.

Despite their enduring popularity, neither has aged very well in terms of real-world application of late. Globalization has moved offshore many of the jobs and services that corporatization had already removed from the small businesses that sustained smaller communities. And the Horatio Alger myth? Please. It was a highly effective weapon of mass distraction 150 years ago, and it’s even more so now.

As the musical chairs of sustainable life in our society are steadily winnowed, hope continues to be pegged on education — where funding for music classes went away long ago, and probably chairs are next — because, really, what else is out there for most people? But public K-12 gets worse and worse, while higher education gets ever more expensive and less valuable. (Of course, without it you’re even more screwed.) Recent years’ legislated focus on test scores has helped make lower education grindingly tedious for most students at a time when they more desperately need to succeed at it than ever to have any chance at an adulthood that doesn’t pledge allegiance to Sam Walton (and food stamps). Even if there were money for it, who is interested in innovating (rather than just privatizing) public education?

If You Build It is a documentary about two people who, in fact, are actively interested in just that: Emily Pilloton and Matthew Miller are partners in Project H Design, which runs Studio H, a program that draws on their architecture and design training to train middle-to-high schoolers in those disciplines while hopefully bettering their personal futures and communities as a whole. They get a chance to put their ideals (and curriculum) into practice when they’re hired for a year by Chip Zullinger, the “visionary” new superintendent of schools in Bertie County, North Carolina’s poorest. It’s so badly off that the opening of a Domino’s Pizza in county seat Windsor represents a major boon to area employment. There’s “no reason to stay here” for local youth, no opportunity and little hope of any developing, making Bertie a perfect laboratory for H’s experiment in ground-up community self-improvement.

But this “design bootcamp” has barely begun when Zullinger is canned by the school board for unspecified “numerous disagreements,” and all his new projects are immediately shut down. In desperation, Pilloton and Miller offer to continue without salaries (foundation grants are in place to cover their basic equipment and materials), so they’re given the go-ahead. Why not? They’re a freebie, now.

The 10 junior class members who’ve signed up are a racial mix. Expecting “a class where we’d make little toys or somethin’,” they’re instead challenged to figure out the basic tenets of design themselves in a series of increasingly complex, locally relevant projects. The first is to create individual boards for “cornholing” — something that hereabouts does not mean what you’re thinking right now, being more a sort of beanbag-toss game — the next constructing idiosyncratic chicken coops. (This is taken seriously enough that chickens are kept in the shop studio in order to study their behaviors and preferences.) Finally, there’s a competition to design a downtown farmers market building — something the area badly needs, as there’s no outlet for local produce and the sole available supermarket’s monopoly allows it to price-gouge.

For the students — despite varying discipline, some admittedly due to the oppressively hot weather during actual market construction — Studio H is a complete win, empowering and inspiring, engaging like nothing else available at school. The completed market is, it seems, a triumph, generating new businesses and jobs even outside its own roof. Yet even after a successful second academic year, the school board again declines to budget salaries for Pilloton and Miller. Maybe, as the latter learned after building a “gift” house in Detroit that ended up abandoned and trashed, people simply can’t appreciate, feel a sense of ownership or responsibility toward something they’ve been given for free.

At least that’s the lesson suggested by Patrick Creadon’s documentary. But for a movie about a program that in turn is about rebuilding communities, If You Build It doesn’t really seem interested in this particular community. Of course we get the usual establishing shots indicating that, yes, this is a certifiable Hicksville. But we never hear from school board members, from Zullinger after he’s fired, or from parents aside from the grateful ones of Project H students. When we see kids passively digesting various curricula at computer monitors (even phys ed is partly online), we’re left to assume this is simply a matter of bad, even stupid adult judgment: Can’t they see these teenagers are dangerously unengaged?

On the other hand, maybe Bertie County simply doesn’t have money for more than a bare minimum of on-site teaching staff. Maybe the supe’s innovations didn’t fly with the board because they meant cutting other essential programs. Who knows? We don’t, because that kind of key info isn’t here. Nor, really, is much character insight — we see little of the students’ lives outside class, and the Studio H duo (partners personally as well as professionally) come off a bit colorlessly, because they’re not viewed very fully, either.

Despite these flaws, If You Build It nonetheless demonstrates how public education still has near-infinite potential to shape lives and whole communities for the better — at least if it pretty much does a full 180 from the direction it’s been headed in for some time. Pilloton and Miller are currently doing their thing at a charter school right here, in Berkeley. That’s great, but also somewhat disappointing, because it’s precisely places like Bertie County that need their like so much more critically, and are drastically less likely to get it. *

IF YOU BUILD IT opens Fri/28 in Bay Area theaters.