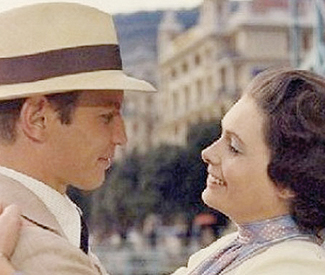 FILM Swinging London had a brief, faddish life in movies in terms of actual representation, far more fleeting than its influences on music or fashion. But the general cultural shift it signaled did bring some lasting changes to English cinema, notably a new kind of leading man — the period’s celebration of youth and dandyism made it OK for men onscreen to be coltish, vulnerable, androgynously attractive. The prime specimen was Michael York, unabashedly pretty and a bit of a toff — certainly no working-class rough like Angry Young Men Albert Finney or Michael Caine.

The Oxford grad joined Olivier’s National Theatre in 1965, getting cast in a production directed by Franco Zeffirelli, who then put him in his filmed hits The Taming of the Shrew (1967) and Romeo and Juliet (1968). But it wasn’t until 1972 that he was seen by everyone as the Christopher Isherwood figure in Bob Fosse’s exceptionally sharp Cabaret, the Broadway musical drawn from that author’s fictionalized memoir. Never mind that he (nor Liza Minnelli, for that matter) would never really be a box-office star; as a name, he was made.

York had a good run through the 1970s. He was D’Artagnan in Richard Lester’s Musketeer films (1973 and ’74), the titular tunic-wearer in 1976’s Logan’s Run, among the stars committing Murder on the Orient Express (1974), John the Baptist in Zeffirelli’s 1977 TV miniseries Jesus of Nazareth, and straight man in both The Last Remake of Beau Geste and the hardly-last Island of Dr. Moreau remake (both 1977).

But the favorite film he’s chosen for his in-person tribute this Saturday at SF’s Mostly British Film Festival is comparatively little-remembered. You could view 1973’s England Made Me as riding the coattails of Cabaret — after all, here he is again as another affable, genteel but cash-poor temporary English émigré to Germany just as the Weimer era is getting tramped by the stormtrooper boots of National Socialism. But the Graham Greene source material (first published in 1935) is strong stuff, intelligently handled by director and co-adaptor Peter Duffell.

York’s Tony Farrant is a pleasant, callow young failure, hopeless at any endeavor that might pay the bills. Having lost yet another job (this time in the Far East), he blows into Berlin to visit Kate (Hildegard Neil), the sister whose queasily inappropriate affections he’s oblivious enough not to have recognized as such, yet. She’s ensconced herself as mistress and second-in-command to Krogh (Peter Finch), international financial titan skating on thin ice amid Hitler’s increasingly nationalistic economic policies.

Once again in need of employment, Tony looks to get fixed up by big sis — in fact, his pleasing, sociable English manners could be quite useful to a man as brilliant yet uneasy with people as Krogh. Then again, his gabby naiveté could also jinx matters much bigger than he grasps. It’s inevitable in Greene’s universe that cruel fate should choose the least guilty party in a web of corrupt intrigue to fall upon, like an anvil from a rooftop.

The role could hardly fall more squarely in York’s comfort zone. Yet it would be a mistake to take the seeming ease with which he delivers Tony’s very easy personality as anything less than very deft work. No wonder it’s a personal favorite — you can sense his engagement in a hundred fresh, surprising, perfectly in-character touches.

After his Seventies peak, York remained busy. But his type began working against him — an ingenue’s worst enemy (even a male one’s) is the onslaught of age — and he didn’t transition as well as some peers to character roles. He slid down the ranks via such odd stints as a short run on Dynasty knockoff Knots Landing and playing Dario Argento’s Phantom of Death in 1988 (the director saving the word “opera” for a later movie). Eventually he was seldom used save to personify old-school Englishness as a joke or fossil, whether visibly (as Basil Exposition in the Austin Powers series) or as a voice actor (as a Transformer, in Star Wars and Batman cartoons, video games, audio books, etc.) In recent years he’s also written several well-received memoirs and lectured extensively on acting Shakespeare.

England Made Me is not the only older film in Mostly British this year, though it’s the only one that comes with a living star in person. No one will be resuscitating the recently decreased Peter O’Toole, memorialized with a screening of 1982’s My Favorite Year; nor will there be any thawing for Richard Burton as The Spy Who Came in From the Cold, 1965’s faithfully bleak adaptation of John le Carré’s breakthrough novel. The latter film plays a “British noir night” with Stephen Frears’ bizarre and rather brilliant 1984 The Hit.

Otherwise the focus, as usual, is on new (or new-ish) films from the UK and beyond. Some have already played theatrically here, like Neil Jordan’s middling vampire opus Byzantium (2012), Beatles-related documentary Good Ol’ Freda (2013), and Michael Winterbottom’s biopic about the UK’s sultan of 1960s and ’70s smut, The Look of Love (2013).

Coming soon to theaters — sooner still if you catch them as part of the festival — are director Roger Michell and writer Hanif Kureishi’s excellent seriocomedy Le Week-End, as well as Mumbai-set The Lunchbox. Speaking of the colonies, outback thriller Mystery Road and kidnapping drama Last Dance represent Australia.

If you appreciated Will Forte’s turn in Nebraska (2013), it’s worth seeing Run & Jump, in which he’s equally effective as an American doctor whose emotions unfreeze while doing research in Ireland — also the setting for Stay, a drearier piece distinguished by Aidan Quinn’s fine take on the stereotypical Irish rascally charmer. What Richard Did is a quietly intriguing melodrama about middle-class teenagers shaken by the aftermath of a fight outside a house party. Farther down the socioeconomic scale, Clio Barnard’s The Selfish Giant offers a portrait of children involved in petty crimes that’s as potent as the best of Ken Loach or the Dardennes. *