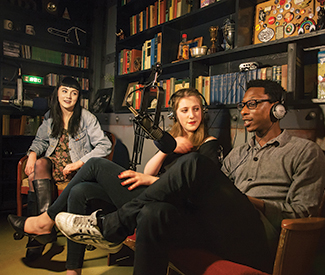 Being a radio DJ in 2014 feels oddly radical.”What do you mean ‘radio’?” people ask, totally perplexed, when I tell them what I do. It’s an independent station on the Internets, I tell them. “Can I call in?” is, without fail, their next question. Not exactly, I say, but we can tweet. It’s not your grandfather’s radio, but the perks are all there.

Web or dial, radio at a very basic level is transmission and reception. No doubt DJing now is physically different from my days on college radio — for starters, 2005 meant I was still fumbling with stacks upon stacks of CDs. Sometimes that shit would skip. Sometimes the play button would stick. Once I lost a disc under the desk and that was that — no more Brother Ali.

As a young college pup, I started as most do — manning a graveyard shift that allowed for the inevitable fuck-ups all newbies make: leaving the mic on while you sing to yourself, messy transitions, stuttering, and awkward jokes. Eventually I smoothed my nerves, developed a more seductive voice, and became master of the knobs and buttons. All my hard work earned a prime-time slot — happy hour. I had arrived. People were listening. I flirted with the idea of radio as a career.

In came the warnings. People called me brave for attempting to make my way into “dying industries”: journalism and radio. They gave me sad eyes, as if envisioning a lifetime of layoffs and corner store ramen. I picked one sinking ship over the other and continued writing. My radio days earned me iPod rights on road trips and conversations at parties, but “DJ” wasn’t even listed on my resume.

I kind of forgot about my old friend, the radio — at least in terms of working with the medium. Then came my new friend, BFF.fm: A now four-month-old, web-based radio station housed in the Mission. The programming is a constant stream of rad, weird, new, and classic jams. The DJs are a diverse batch of local cats, bonded by their unique obsessions with music.

And so it’s official: Radio and I have rekindled our romance.

Every Friday night my human BFF, Brit Spangler, and I co-host “hello, cheetle,” two hours of ratty rock-and-roll and secrets about our whiskey habits, stoney shenanigans, pizza, merkins, and all kinds of naughty things that I’m slightly embarrassed to have my parents hear on the regular — yes, they’re dedicated listeners.

Thankfully the station founder, Amanda Guest, thinks all this is entertaining. Creepy girls being creeps is OK by BFF standards. The station aims to be the audible representation of San Francisco. Guest is beyond stoked by BFF’s growing popularity.

“Things are going prettyyyyy amazingly,” Guest tells me while sipping a gin and tonic. She’s smiling hard. “I know it’s dumb to say, since I started the station, but…I love the station. I think it’s great. It’s filling a need.”

Birthing a San Francisco radio station was the entire purpose of her move from the East Coast a couple years back. Her skeptical Massachusetts friends sent her packing for a city that might be down with such unique ambitions. The original plan included hosting the station from her and husband Forrest’s apartment, but the idea quickly outgrew the living room. “I had this dream, but it wasn’t big enough,” — her grand plans were taking shape and collecting support.

Guest — aka DJ Cosmic Amanda — craved a real broadcast studio. By a fat stroke of luck and plenty of charm, she landed a space in the fairytale-esque Peter Pan-style workspace that is the Secret Alley. Immediately she and her man began the work that would get BFF on air.

“Forrest became the station manager and pretty much handled everything else related to that department,” she says. “I was like, oh, I’ve seen a station, I know what it looks like — you just plug this into this. Clearly that is not how it works.”

Through technical concerns, financial woes, and equipment searches, the couple caressed the challenges until their lovechild of a station was born. “BFF.fm is the baby I will never have,” she says, laughing — in all seriousness.

Trading potential offspring for SF music nerds, the Guest family is growing — 60 DJs now host 45 shows throughout the week. From obscure electronica and ’80s favorites to garage rock and blues, BFF’s roster goes in all directions.

“I like to say our show plays ‘high-quality’ music — no point in using genres anymore,” says Gregory Hill, who DJs as Cool Greg on Monday nights. Together with co-hosts Marisa Breall and Katie Kopacz, the trio plays tracks to complement their other shared gig, Professional Fans: show promoters, DJs, and the like.

“Our show is the perfect way to plug both the shows we are going to as fans and the ones we are going to as promoters,” says Hill. The friends see the radio as bonding space for music lovers at large: fans, bands, labels, and venues, all mingling in new ways. “BFF is creating community. There’s some real closeness happening.”

This kind of passion is exactly what Guest is cultivating. “I want to see real excitement in the DJs. Putting together a thoughtful show every week isn’t easy. It takes a certain kind of person, someone who strives to keep it fresh,” she says, being a long-time DJ herself. “It’s a job done out of love.”

I ask her if streaming ever weirds her out. Does the connection feel less real? Less radio?

“It still feels very natural to me. The delivery has changed a lot but the basic components remain,” she says.

“It’s still a person in a room, sharing with another person somewhere else. It’s people devoting their attention to a shared media,” she says. “Radio is magic.”

Tune in to BFF.fm on the Internets here.