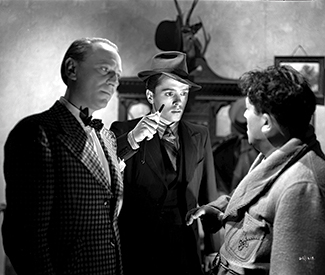 FILM Though its definition has been stretched hither and yon to accommodate films that might appeal to the same retro-minded audience, film noir is a well you can go to only so many times before risking excess repetition or bottom-scraping. So it’s good news that the latest annual edition of SF-bred Noir City at the Castro Theatre — kicking off Fri/24 — expands its programming to the separate-but-equal terrain of 1940s and ’50s crime melodramas made outside the genre’s traditional home. Dubbed “It’s a Bitter Little World,” Noir City 12 has a smattering of Hollywood titles, but otherwise for the first time ranges far afield, hauling in tough dramas from places like England, Argentina, Germany, and Japan.

The somber post-war mood that spurred noir cinema was, in the US, fomented largely by the trauma and disillusionment suffered by both returning vets and those they came back to. But in many other nations, the damage was more than personal and psychological — people returned to cities reduced to rubble after years of fighting, surviving residents already accustomed to extreme deprivation. Plus, former allies and enemy combatants alike were now regarded with suspicion as they lingered at the war’s end to oversee “reconstruction,” the language and cultural gaps and unfamiliar new lines of authority in turn breeding new avenues of corruption and resistance.

Two films most directly dealing with that atmosphere are double-billed Mon/27. Made in 1946 (though it wasn’t released in some parts of divided, occupied Germany until some time later), The Murderers Are Among Us was the first of the “trümmerfilm,” literally “rubble film” — movies portraying Germans’ struggles with recuperation and loss in the wake of humiliating defeat, not to mention the revelations of heinous Nazi war crimes. Returning home from a concentration camp, Susanne (Hildegard Knef) finds her Berlin apartment already occupied by Hans (Wilhelm Borchert), an embittered, alcoholic physician who no longer practices.

Forced to uneasily cohabit, they try to re-establish some semblance of ordinary life, though that effort is imperiled when former military doctor Hans discovers the superior officer he’d thought dead is in fact alive, well, and prospering — suffering no consequences at all for ordering the massacre of a hundred Polish civilians, including women and children. (Purportedly, occupying Soviet authorities insisted on changing the film’s intended ending, fearing that if Hans actually assassinated the officer, viewers would be tempted toward vigilante justice themselves.)

Duly shot amid a city in ruins, Murderers remains potent stuff, even if it soft-pedals certain aspects: For instance, concentration camp survivor Susanne is as Aryan as can be, the subject of a Jewish Holocaust apparently still being too touchy to mention. Knef (who actually had spent time in a prison camp) became an immediate star, a refreshingly unconventional one who spurned Hollywood offers and shrugged off outrage over a nude sequence (in 1950’s The Sinner) with the memorable observation that such “tumult” was ridiculous coming “five years after Auschwitz!”

Its 1948 co-feature Berlin Express, directed by Jacques Tourneur (of 1942’s Cat People and other horror classics) was a Hollywood production shot on location in Europe, with a multinational cast playing various figures traveling on a train from Paris to the German capital. When one who’d been an important German anti-Nazi resistance figure is killed en route, lingering wartime animosities are overcome to solve the crime — the tentative friendships among them a simple metaphor for the cooperation required among nations to rebuild after catastrophic conflict.

Less politically tilted, but also dealing with a devastated, immediately-postwar landscape, are Akira Kurosawa’s first two collaborations with dynamic star Toshiro Mifune, screening Sun/26. Mifune plays a seriously ill crook in 1948’s Drunken Angel, then crosses over to play a no-less-edgy junior member of the police force in the following year’s Stray Dog. His protagonist in that film is mortified when the revolver he’s issued is stolen on a tram, then used to commit a series of crimes. His obsessive pursuit of the weapon takes him deep into a remarkably seedy makeshift Tokyo of shanty towns, prostitution, and black markets, everyone flop-sweating amid oppressive summer heat.

Other films examine more ordinary, already-entrenched corruption in post-war power structures: Spanish Death of a Cyclist (1955) and Norwegian Death is a Caress (1949) find members of the social elite going to murderous lengths to hide their infidelities; two excellent British dramas from 1947, It Always Rains on Sunday and the Graham Greene-derived Brighton Rock, are bleak slices of lower-class lives driven to crime and desperation; florid Mexican melodrama Victims of Sin (1951) puts its glamorous heroine (blond Cuban Ninon Sevilla) through a mill of sexual hypocrisies and hot “African” dance numbers.

Just one title here is strictly all-American, but it’s an important one: Too Late for Tears is an independently produced 1949 “B” potboiler that fell into the public domain and has only been seen for years in inferior prints. The festival’s Film Noir Foundation is premiering its own painstaking 35mm restoration of this little gem by subsequent sci-fi specialist Byron Haskin (1953’s The War of the Worlds, 1964’s Robinson Crusoe on Mars), wherein velvet voiced LA housewife Lizabeth Scott discovers a mighty capacity for greed, deception, and even murder once a bag full of stolen cash accidentally falls into her hands. *