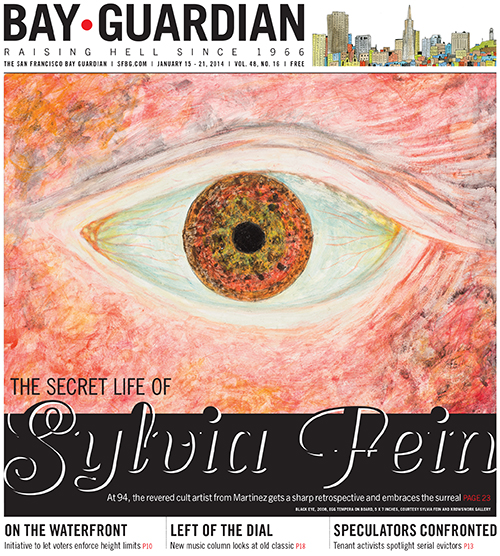 VISUAL ART In 2012, I ran down to the Los Angeles County Museum of Art for “In Wonderland,” a massive exhibition of women surrealist artists working in the US and Mexico from the 1930s through the ’60s. Among the artists — from big names like Frida Kahlo and Leonora Carrington to obscure figures like Bridget Tichenor and Julia Thecla — there were only two living participants: Yayoi Kusama and Sylvia Fein. I was familiar with Kusama’s polka dots and happenings, but Sylvia Fein was altogether something else, a figurative painter whose gleaming egg-tempera-on-gesso works from the ’40s and ’50s suggested at once the allegorical portraiture of the Renaissance and the alchemical surrealism of Remedios Varo.

As it happens, Fein lives out near Martinez, and I soon found myself making pilgrimages to her house. Nor was I the only one, and among the people to have sought her out in the wake of “In Wonderland” are curator Travis Wilson and Jasmine Moorhead, owner of Oakland’s Krowswork Gallery. Together Wilson and Moorhead have mounted an ambitious retrospective, “Surreal Nature,” spanning the whole of Fein’s career but particularly emphasizing her output of the last decade, which has never been publicly shown.

Still using egg tempera on gesso, the spry 94-year-old painter continues to create her most astonishing works today, paintings that defy the usual division between abstract and representational; an eye, for example, might float in the middle of an otherwise wholly abstract cosmos, as in Crucial Eye (2011) or Marble Galaxy (2010). And while the catalog to “Surreal Nature” indicates she has rejected such labels as “surrealist” since her mid-20s, Fein has softened her stance somewhat over the ensuing years.

“I really don’t think that’s the word even though we use it all the time,” Fein says. “I think most paintings are surreal because they’re in another dimension. Sur-real, but in the right sense. Because it is above the ordinary.”

Certainly Fein’s career has been anything but ordinary; while studying painting as an undergraduate at the University of Wisconsin, Madison, in the early ’40s, Fein became part of a six-person group of “magic realists” led by Marshall Glasier and including fellow “In Wonderland” artist Gertrude Abercrombie. Along with group member John Wilde, Fein earned a show at the university’s gallery in 1941, a rare honor for undergrads. World War II brought a period of intense anxiety over the fate of her enlisted husband, Bill Scheuber, expressed in such works as The Lady with the White Knight (1942-43), but it was during a stay in Mexico (1944-46) that her art fully flowered.

“I lived in a place where there was no running water and no flushing toilets,” she laughs, relating such elemental conditions to her artistic maturation. “God, that really fit my personality. And here I grew up in Milwaukee!”

In 1947, after her husband’s return from the war, the couple moved to the Bay Area, where Fein would receive an MFA from the University of California, Berkeley, participating in a pre-Beat bohemia that included the likes of dancer Anna Halprin and composer Harry Partch. But her real education, she maintains, was at the hands of art theorist Henry Schaefer-Simmern.

“He’d been brought to teach at Cal and his ideas were so revolutionary that technically they threw him out and he started his own art institute,” Fein recalls. “I was one of his first students, and he was teaching that there was an evolutionary artistic intelligence, that most art begins with scribbles, then it starts to get formation, it evolves into circles and out of circles children make other lines. Not only that, but if you look at the history of the world and primitive societies, you see the same evolutionary things, whether in caves or rocks, scribbles on hides.

“I worked with him for 20 years. He was writing books; I did research for him, and then I did drawings for his books, in ink, of historical subject matter, so it was like I was studying the history of the world all over again then delineating it for him. That’s like a secret part of my life nobody has ever mentioned.”

At the same time, Fein managed a successful career as a painter. By the mid-’50s, when monumental abstraction was in, she was working nearly in miniature, painting tiny landscapes and seascapes. Nothing could have been less fashionable, but she still sold well on both coasts. Yet in the early ’70s, she began a 30-year hiatus from painting, as she wrote and self-published two books inspired by her work with Schaefer-Simmern, Heidi’s Horse (1976), an analysis of her daughter’s drawings of horses between the ages of 2 and 16, and First Drawings: Genesis of Visual Thinking (1993), a related account exploring the development of visual logic in children, primitive societies, and other artists. Only in the early 2000s did she return to painting, in time for rediscovery by curator Robert Cozzolino, who staged a show of the ’40s magic realist group, “With Friends,” at the University of Wisconsin in 2005. This show led directly to her inclusion in the 2012 LACMA exhibition.

While both “With Friends” and “In Wonderland” focused on the ’40s and ’50s, “Surreal Nature” is the first opportunity to see Fein’s present work, even as the curators have done an excellent job of contextualizing it in terms of her overall development. One need only juxtapose The Lady with the White Knight with her most recent series of memorial “trees” for her husband Bill — who died in 2013 after some 70 years of marriage — to see how her own version of surrealism has transformed from an image-based style to a more directly experiential art of brushwork and materials.

“It sure is flowering in my late age,” Fein remarks. “I’m so lucky that’s happening. You can’t make yourself do this.” *

Thu-Sat, noon-6pm and by appt.