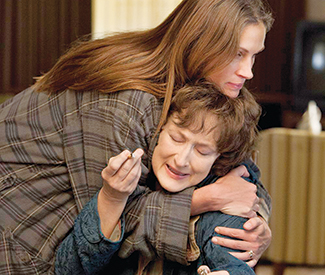 FILM Considering the relative infrequency of theater-to-film translations today, it’s a bit of a surprise that Tracy Letts had two movies made from his plays before he even got to Broadway. Bug and Killer Joe proved a snug fit for director William Friedkin (in 2006 and 2011, respectively), who well past age 70 experienced something of a career resurgence from them. Those modern Grand Guignols got around, but were too outré for the kind of mainstream success accorded 2007’s August: Osage County, which won the Pulitzer, ran 18 months on Broadway (an eternity for a non-musical at present), and toured the nation.

As a result, August was destined — perhaps doomed — to be a big movie, the kind that shoehorns a distracting array of stars into an ensemble piece, playing jes’ plain folk. On stage, this Long Day’s Journey Into Fuck All Y’All was a juicy-steak drama meal, chockablock with family dysfunction, colorful cussin’, shocking revelations, and ghoulish as well as broad humor. It was like a vintage Sam Shepard text crossed with an old-school three-act “well-made play.” It was also three and a half hours long.

To his credit, Letts’ own screenplay adaptation clocks in at almost exactly two hours, a considerable reduction that nonetheless doesn’t feel gutted. Whether it feels like a movie, though, is another question. What seemed bracingly rude as well as somewhat traditional under the proscenium lights just looks like a lot of reheated Country Gothic hash, and the possibility of profundity you might’ve been willing to consider before is now completely off the menu. If you haven’t seen August before (or even if you have), there may be sufficient fun watching stellar actors chew the scenery with varying degrees of panache. But the play exposes itself in a medium it might have been most suitable for 50 years before it was written. (Not that the censors would have allowed it then.)

Gorgon matriarch Violet Weston (Meryl Streep, who else) is dying of cancer, albeit not fast enough — she’s still quite capable of driving long-suffering, shot-pounding spouse Beverly (Shepard) to distraction, and all other “loved ones” to a safe geographic distance away. Nonetheless, when Bev simply exits their rambling rural Oklahoma home with no apparent intention of returning, the scattered troops are called in for reinforcement.

Pissed-off prodigal daughter Barbara (Julia Roberts) returns in the company of a husband (Ewan McGregor) and teenage daughter (Abigail Breslin) she’s well on her way to alienating just like mommy did. Middle child Karen (Juliette Lewis) is a man-crazy ninny entering another bad marriage, this one to a Master of the Universe, Florida-style (Dermot Mulroney). Family doormat Ivy (Julianne Nicholson), the third sister, stuck around to masochistically endure Violet’s ingratitude and caustic pity but might be plotting her escape at last. Last and least, there’s Auntie Mattie Fae (Margo Martindale), a viperous chatterbox whose husband (Chris Cooper) self-medicates with beer and TV, while their son (Benedict Cumberbatch) is treated like an even bigger loser than he is.

You know the beats: Late-night confessions, drunken hijinks, disastrous dinners, secrets (infidelity, etc.) spilling out everywhere like loose change from moth-eaten trousers. Even at its much greater stage length, August was overstuffed, though what seemed excessive in a mostly good way then now simply plays as a pileup of clichés and contrivances enlivened by some good lines and snappy performances. Of course the dialogue sounds ornately “theatrical” in this more naturalistic presentation. But director John Wells, a veteran TV writer-producer whose prior feature was 2010’s decent corporate-downsizing drama The Company Men, doesn’t make anything seem very natural. (If Nebraska lives and breathes its locations, this movie might as well have been shot on a studio back lot for all the authenticity earned.)

Nor can he magically weld this cast into a credible “family.” Lewis and Martindale get a lot out of their comically vulgar characters, but are ultimately too one-note. Mulroney delivers a very sharp caricature with less visible effort; Cumberbatch and Nicholson are OK as wallflowers amid invasive stinkweeds. Cooper is the kind of actor who can manage a great deal while seemingly doing very little, while McGregor is the type who can sometimes look like he’s working awfully hard to make absolutely no impression whatsoever. The film’s success story, I suppose, is Roberts: She seems very comfortable with her character’s bitter anger, and the four-letter words tumble past those jumbo lips like familiar friends.

On the downside, there’s Streep, who’s a wizard and a wonder as usual yet also in that mode supporting the naysayers’ view that such conspicuous technique prevents our getting lost in her characters. In the national touring stage production, octogenarian Estelle Parsons was manifestly a cranky old lady — you worried for her going up and down those three flights of stairs, and gasped at her not-at-all-cute potty mouth. Streep acts the shit out of being cranky and old; one suspects between takes she’s probably running triathalons and saving whales. She pulls out the stops, but maybe they should have been left in. If Streep can do anything, then logic decrees that include being miscast.

Still, she’s a lucky woman alongside Misty Upham, who plays that eternal most-thankless role: The largely mute, ever-observant “ethnic” (here, Native American) domestic-nurse-helper who graces all these yelling white people with her quiet compassion, swooping in to save the innocent and comfort the comfortless when necessary. (She also cooks so well you half expect magical Like Water for Chocolate-style dishes to heal all wounds.) Among the things August has lost in translation is the pretense of unsentimentality. When Gustavo Santaolalla’s schmaltzy score drips like molasses over Upham’s payoff moments, you know it’s gone way too far in the other direction. *