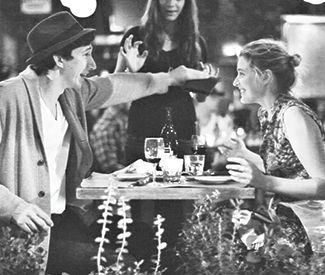 16. Oldboy (Spike Lee, US) and Drug War (Johnnie To, China/Hong Kong) Two films from two of the hardest-working filmmakers in the biz. Though close to an hour and 20 minutes were butchered from Lee’s reimagining of Park Chan-wook’s 2003 film, it still offered an audacious look at entitlement in America. And To delivered yet another taut gangsters vs. cops drama that ranks up there with The Mission (1999) and PTU (2003).

14. Ida (Pawel Pawlikowski, Poland/Denmark) and Walker and Stray Dogs (Tsai Ming-liang, France/Taiwan) Both filmmakers embody the importance of taking one’s time to do it right. And whoever said transcendental cinema is just for the Dardenne brothers?

13. Like Father, Like Son (Hirokazu Kore-eda, Japan) and Mud (Jeff Nichols, US) Masterful, and medicine for my daddy issues.

12. Bastards (Claire Denis, France/Germany) and Moebius (Kim Ki-duk, South Korea) Jonas Mekas should be proud … Baudelairean cinema is alive and well. And I can’t get the faces of actors Vincent Lindon and Lee Eun-woo out of my head.

10. Beijing Flickers (Zhang Yuan, China) and A Touch of Sin (Jia Zhang-ke, China/Japan) “Sixth Generation” Chinese cinema is vibrantly alive and well. Do yourself a favor and get wrapped up in these explosive films.

9. Blue Jasmine (Woody Allen, US) and Before Midnight (Richard Linklater, US) As John Waters says, “Woody Allen makes straight relationships seem interesting.” Not only should both Cate Blanchett and Sally Hawkins get Oscar nods for Blue Jasmine, but Andrew Dice Clay should actually win. Add to that Julie Delpy, Ethan Hawke, and Richard Linklater’s most profound film of their trilogy — I can’t wait for the next three.

8. The World’s End (Edgar Wright, UK) and Sion Sono’s The Land of Hope (Sion Sono, Japan/Taiwan/UK/Germany) Both of these cult directors recognize that the loss of personal relationships are as serious as the end of the world. Multiple viewings are recommended.

7. Miss Lovely (Ashim Ahluwalia, India) and The Canyons (Paul Schrader, US) Exploitation cinema that practices what it preaches seems to always be misunderstood or disrespected upon its initial release. The fact that India even allowed Miss Lovely to be made is as exciting as Paul Schrader’s decision to cast troubled starlet Lindsay Lohan.

5. Spring Breakers (Harmony Korine, US) and Michael Bay’s Pain & Gain (Michael Bay, US) Don’t stop with Korine’s ode to the ultimate American neon fever dream. I dare you to experience Bay’s pumped-up screwball satire. Added bonus: Dwayne Johnson turns in one of the funniest performances of the year.

4. 12 Years a Slave (Steve McQueen, US/UK) and Gravity (Alfonso Cuarón, US), plus Aningaaq (Jonás Cuarón, US) Mainstream cinema got it right this year and these Oscar-baiting films deserve more credit than just some awards. They might be changing a whole generation. If you haven’t watched the younger Cuarón’s Greenland-set Gravity companion short, go online ASAP. It’s as good as any feature this year.

3. Ulrich Seidl’s Paradise trilogy: Love, Faith, and Hope (Austria/France/Germany) Hands down, the best political-art-porn trilogy of the decade. I can’t choose which one is my favorite.

2. Norte, the End of History (Lav Diaz, Philippines) Diaz’s four-hour masterpiece about a group of existentialist 20-somethings encapsulates why I fell in love with cinema in the first place.

1. The Lone Ranger (Gore Verbinski, US) I will say it, and I will say it loudly: The Lone Ranger is the most subversive Hollywood film since Starship Troopers (1997). This uncompromising, revisionist Western is surprisingly ruthless with its all-American violence, and is highlighted by offbeat slapstick performances (by both Johnny Depp and Armie Hammer) and action scenes that audiences will get to uncover for decades to come. I’ve watched it four times, and it’s only gotten better with each viewing.

Jesse Hawthorne Ficks writes film festival reviews for the SF Bay Guardian, curates Midnites for Maniacs at the Castro and Roxie, and is the Film History Coordinator at Academy of Art University.

3. John Dies at the End (Don Coscarelli, US)

7. The Punk Singer (Sini Anderson, US)