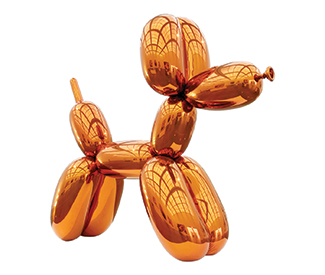 YEAR IN VISUAL ART One of the art world’s largest trends for 2013 culminated in November, at Christie’s record-breaking contemporary art auctions that saw the most money ever paid for an artwork (Francis Bacon, Three Studies of Lucian Freud, $142 million) and the most ever for an artwork by a living artist (Jeff Koons, Balloon Dog (Orange), $58 million). The general outrage that followed for once united Joe Shmoe and the art blogosphere in reactions that ranged from disdain to histrionics. Hating rich people and their spending, it turns out, is something that we can all really get behind.

It was a bit surprising, really, to read such astonished responses from professed art world insiders, most of which gave voice to disgust and outrage at the amoral caprice and soulless gluttony of various, shameless one percenters plunking down ungodly sums of money on balloon dogs and other decadent, trashy, luxury stuff that clearly anybody’s kid could dream up. Or something like that.

Now that the dust has settled a little, it’s worth revisiting those sales without the preaching, and figure out what they mean for the art world going into 2014. A couple observations follow.

First, and contrary to universal opinion, as far as I can tell these artworks sold on the cheap. My math: the top ten collectors of art in 2013 are worth more than $10 billion each on average. At the November evening session at Christie’s, the average sale price for a work of art was just shy of $11 million. Those numbers make my head spin, so let’s scale down to you-and-me bucks: The wealthiest and most active collectors were paying mere fractions of their net worth, on average, for the artworks. Maybe a tenth of a percent. If you or I put down that much of our net worth, we’d be talking somewhere between, say, a couple hundred to a couple thousand dollars. In other words, a completely reasonable amount of money — cheap, even. About the pricing you’d expect for an emerging artist’s work.

Looking at the money in scale, there are actually very few buyers at the top willing to splurge heavily on individual works of art. If, as ARTnews reported in its 2013 summer issue, there are 100 collectors in the world willing to throw down more than $50 million on art, it’s a tiny number of people and a very modest amount for a billionaire. The high end of the art market is pretty conservative considering who’s playing in that game. In fact, if rumors are true and Russian billionaire Roman Abromavich is the buyer for Three Studies of Lucian Freud, then he spent about 1.4 percent of his net worth on the paintings, something between the price of a nice sofa and a car, in you-and-me terms.

Second, these purchases weren’t speculative or the result of a bubble. The runaway consolidation of global wealth among the one percent is accelerating. If their spending on luxury items like blue chip art keeps any kind of pace with their expanding wealth, then the prices at the top tier should be racing higher every year. These people are astronomically rich. They should be putting down lots of money on art.

And it’s not all balloon dogs and pill paintings, either. Looking back over the year, you notice record-breaking investments in the work of young and talented artists, among them former Bay Area artist Tauba Auerbach, whose six works sold in June for a combined $1.34 million, as well as Cecily Brown, Mark Grotjahn, Julie Mehretu, Tara Donovan, and others.

And, I’m not even going to get too upset about that orange Jeff Koons dog sale, clearly an act of peer showmanship. Like an episode of Voltron, the other four colored dogs are scattered between billionaires Steven Cohen (Yellow); the Broad Foundation (Blue); Francois Pinault (Magenta); and Dakis Joannou’s DESTE Foundation (Red). In the end, you know what? At a relative scale for us worker bees, $58 million is something like splurging on a Basil Racuk bag. Maybe not entirely necessary, but well worth the dough, and I can totally understand the peer pressure if your friends are all lucky enough to have one.

My most optimistic take on this is that money flooding in at the top end of the market helps not just bluest blue chip artists like Koons, and not even the newly minted blue chips like Grotjahn, but also helps to redefine what a quality work of art ought to cost, and widens the expectations for what wealthier people than you and me ought to be paying. Let’s face it: I’m not in the market for a Francis Bacon painting, nor are you. *

For the curious, I got the top ten list from ARTnews.com; each billionaire’s net worth from Forbes.com; and the auction results from Christies.com. I’m sure the more statistically inclined among you will take issue with my unweighted averages, and I hope you feel free to comment with more elegant calculations than mine.