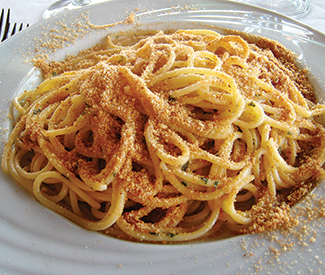 Who doesn’t like lasagna? Exactly. It’s one of many reasons I’m excited to head over to the new La Nebbia (1781 Church, SF. www.lanebbia.com) in Noe Valley. The name means “fog” in Italian, something we know too damn well here.

It’s a sister restaurant to Massimiliano Conti and Lorella Degan’s La Ciccia (barely a block away), but it’s more of an enoteca, prosciutteria, and, yes, lasagneria. Everything on the menu is meant to go well with wine, so you’ll find 10 kinds of hams, ranging from prosciutto to jamón Ibérico, along with fresh cheeses (like burrata), and there are also a few pizzas too.

Don’t expect the usual suspects — the kitchen is having some fun with toppings like squid ink, fresh mozzarella, anchovies, sultanas, and pine nuts. As for the hot lasagna action, there will be a traditional one with ragù and béchamel; another with ricotta, pesto, and escarole; and one that is like a seafood puttanesca. Porchetta is also rumored to be coming soon.

As for the wines, they all come from foggy regions in Italy, and you can try about 30 by the glass, and 20 sparkling wines or so are on the list too. It’s a casual place to swing by, with a 13-seat counter, a communal table, and some two- and four-top tables. Hours are Sun, Tue–Thu 5:30pm–10:30pm, and until 11pm Fri–Sat, closed Monday.

Due to soft open this Thursday in the former Frankie’s Bohemian Café space on Divis is Presidio Pizza Company (1862 Divisadero, SF.) from chef-partner Frank Bumbalo, who is opening the joint with the neighboring Fishbowl owners, Kevin Kynoch and John Miles. Anyone who has been jonesing for a New York–style slice will be happy to know Bumbalo is a Brooklyn native, and will be slinging thin-crust New York (Neapolitan round) style, plus Sicilian style, and here’s a new one to me: grandma pizza.

Bumbalo explained that grandma pizza is a form of thin-crust pizza, but square like a Sicilian (and not as thick), with origins in Long Island — its name seems to come from the type of pizza Italian grandmas and mothers make at home. Working the decks with Bumbalo is Chris Norton, previously a line cook at A16. There will be two entrances. If you walk in off Divisadero, you’ll find table service. If a quick slice is what’s on your mind, you’ll want to enter on Pine. (There will be some bar stools and a standing ledge). Hours to start will be Sun–Wed 11am–11pm, Thu 11am–12am, and Fri–Sat 11am–2:30am (whew, you can snag a slice just after last call).

Anyone who knows any southern Italians (or happens to be one) has probably heard of the Feast of the Seven Fishes, the traditional feast on Christmas Eve (Dec. 24th).

While the Italian half of my family doesn’t limit our “Cenone” to just seven fish, it truly is one of my favorite meals of the year. (Anchovy and breadcrumb pasta, what’s not to love?) Some San Francisco restaurants are getting in on the feast, and while some of the dishes aren’t exactly traditional, they’ll certainly be pleasing. Check out A16 (www.a16sf.com), $80 per person, or A16 Rockridge (www.a16rockridge.com), $75, which are both offering seven seafood courses; Locanda (www.locandasf.com) still has some seats at both its 5pm and 8pm seatings, $90; Palio d’Asti (www.paliodasti.com) is doing a feast for $79 per person; and lastly, the Calabrese-owned Poesia (www.poesiasf.com) in the Castro is doing a Calabrese-style, seafood-focused dinner that night too. Buon appetito, buone feste!