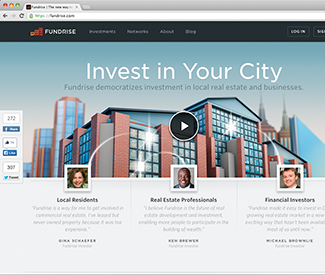 We caught up with Dan Miller at a cafe in San Francisco’s Financial District, where solitary patrons hovered over laptop screens as they sipped coffee.

Sporting a goatee and collared shirt, Miller, 26, seemed to blend in perfectly. The Washington DC native, a product of the East Coast real estate development world whose father had a hand in developing several iconic properties, was in San Francisco for meetings about FundRise, a startup he and his older brother Ben cofounded. The company is frequently described as being like Kickstarter, but for real estate investment.

Miller has been meeting with representatives from San Francisco’s Office of Economic and Workforce Development, a city agency in the Mayor’s Office. While nobody in City Hall was willing to get specific about those meetings, it seems officials are looking to FundRise for help tackling the city’s bedeviling housing affordability crisis.

Miller has been meeting with economic development offices in cities nationwide, and he’s convinced that housing affordability is a problem everywhere. “But it’s more acute in San Francisco than anywhere else I’ve seen,” he said, “just because of an influx of tech jobs.”

In the last six months, he added, OEWD representatives have seemed increasingly concerned.

The idea of crowd funding real estate is new, and the whole enterprise is still coming to fruition. But the underlying idea is intriguing: Take real-estate investment out of the hands of exclusive multimillion-dollar investment firms, and open it up instead to anybody who happens to have 100 bucks or more to throw in.

In an affluent city like San Francisco, the tool could create wiggle room for more housing projects that are tailored to actual needs, through partnerships with affordable housing developers.

It started when Miller and his brother encountered across-the-board rejection from big investment firms. To hear him tell it, the rise of private equity firms — which have no meaningful connection to the communities they develop — has produced blandness on a sweeping scale.

Objectives like preserving economic diversity, or honoring a community’s wishes, don’t factor in when these firms determine what to fund; they only consider whether an investment is deemed safe and profitable. That means predictable: think obscenely expensive, characterless market-rate condos. And since they’re the dominant financiers, their judgment is the final call.

“We spun off from our family business and started buying old auto warehouses, converting them, leasing them to local tenants,” Miller explained. “We took these projects to private equity firms, and they just didn’t get it. All the decisions they made were predicated on the financial pro forma,” he added, referring to documents that project expected returns. “They were really constraining what’s possible.”

Sounding like a tech person, he pronounced the whole system woefully inefficient. FundRise seeks to take advantage of little-known Securities and Exchange Commission regulations, as well as new provisions under the federal Jobs Act, to give people the opportunity to use crowd funding instead. (It doesn’t eliminate the need to apply for bank loans, which is a different part of the financing picture.)

The idea is that FundRise vets a project’s viability to make sure it won’t result in widespread loss, then helps proponents attract contributions through an online social network.

In the investment world, the vast majority of transactions are made by “accredited” investors, whose net worth equals $1 million or more, or with annual incomes of $200,000 or higher. But there are others out there who might have extra cash to put toward projects they believe in, like, say, affordable housing complexes for seniors — who don’t mind making a lower return.

The Miller brothers have built an online system they hope will connect these would-be lenders with projects in their own communities.

“Since you can invest directly, digitally, you’ve cut out so many middle men,” Miller explained. “You can make a 6, 8, 10 percent return. The real estate investment firm targets are 20 percent. But that’s because there’s just people taking a piece all the way down the ladder.”

The cofounders may be idealistic, but at the end of the day, they’re businesspeople, not activists. Since the company takes a cut of all investment earnings, it could succeed financially even if it the platform only winds up getting used to finance pet projects for dot-com millionaires.

Nevertheless, some longtime champions of low-income housing have recognized its potential to help solve a perplexing puzzle: How to secure capital for affordable housing in a world where investors are hardwired to make as much money as possible.

“We are hoping that as the larger movement for crowd funding works with the SEC, we can have more people make these investments in the local community,” said Tracy Parent, executive director of the San Francisco Community Land Trust.

Her organization is the first nonprofit affordable housing developer to test the waters with FundRise, in a bid to raise $1 million to keep Marcus Books, a historic African American-owned business, in its current Fillmore Street location. Due to a short timeline, they’re confined to accepting funding only from accredited investors. But in the future, they could use the tool to structure a public offering that would allow anyone to contribute toward preserving affordable housing.

While public subsidies will still be needed for below-market housing, “FundRise allows affordable housing developers to take properties off the speculative market,” Parent explained. “Any way we can democratize capital investment,” she added, “will be a good thing for our community.”