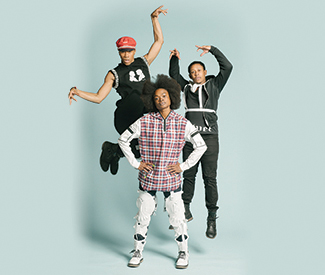 YEAR IN NIGHTLIFE The drink of the year was the Chinese Mai Tai at Lipo Lounge. It’s $9, but it’s huge and you only need one. Or maybe a half, if you want to remember your pants. Oh, just drink the whole thing.

As far as music goes: we’ve managed to fend off the worst of pop-EDM, while welcoming the drum ‘n bass and big-room ’90s sound comeback with open underground arms. (Also, there is an actual underground!) San Francisco’s still a major destination for techno up-and-comers — and even though you may stumble across some clueless tech-bros sporting 2k7-wear or novelty rasta wigs on our finer dance floors, give them a hug and hope they improve! It’s all good.

Before I get into some of my favorite 2013 things, let’s tip a hat to two legends we lost this year: Scott Hardkiss and Cheb i Sabbah. Between them, they brought a whole world’s worth of music to our dance floors and spanned generations. Dancing forever in their honor.

Hip-hop got so good in 2013, the Year that Twerking Ate the Internet. Trap sounds and molly pops seemed to invigorate the East Bay scene: E-40 dropped a zillion slaps, while Iamsu! and Sage the Gemini (who can totally get it, hellieu) swerved onto the national scene. Buffed-up SF legends Latyrx dropped a nifty disc after two decades. In the bigtime, Kanye bought up every edgy electronic producer he could to impress Pitchfork, while Danny Brown and Kendrick Lamar recontextualized essential ’90s rap tropes — gangsta and concept albums, respectively, but in a party way.

Unfortunately, another ’90s rap trope, tired homophobia, was also revived, with Eminem and Tyler, the Creator fumbling bigtime. This time, however, there was such a huge and thriving queer hip-hop party scene that we could look right past all that lazy ish. Queer rap broke big in 2012 when eye-catching artists blended witch-dark sounds, quantum vogue moves, and afro-surreal poetry with R&B licks, broken bass boost, and neon-bright performance art.

That scene deepened and brightened this year — here, at super parties like Swagger Like Us, 120 Minutes, Fix Yr Hair, and House of Babes and unstoppable homegrown talent like Micahtron, Double Duchess, and even cameo appearances by classic homohop babes Deep Dickollective — proving that spitting flames can still burn down the disco. And queer-rap resistance even grabbed the national spotlight when Daddie$ Pla$tic‘s electro-anarchic “Google Google Apps Apps” went viral.

The Honey Soundsystem crew ended its Sunday night parties at the top of its game with a huge blowout — surprise marriage proposal, performance by fabled ’80s singer Jorge Socarras, and slew of unannounced guest DJs included. Honey was an ostensibly gay club, but that might have just been a feint to pack the floor with hairdressers. While it never ceased brazenly shoving its raw homosexuality in the oft-frigid techno scene’s face, its influence went way beyond the queer sphere. For five years, it was our best weekly in terms of musical guests (Wednesdays’ fantastic Housepitality almost ties it on that score), bringing in a mind-blowing roster of international underground players.

But Honey Sundays were more. Will there ever be a party ballsy enough to take as a month-long theme the skyrocketing real estate market, condo-mapping its venue and printing “luxury house” brochures? Or base the décor of one of its biggest parties around a collection of putrid haters’ comments? What promoters, nowadays, even bother to actually design and print challenging works of art as posters and flyers, or truly transform their venues? (DJ Bus Station John, still our gold standard, is the only one I can think of.)

Fortunately, Honey parties will continue, just not weekly. But SF is full of such amazingly talented crews, both well-established (As You Like It, No Way Back, Sunset, Lights Down Low, Icee Hot, Opel, Pink Mammoth) and burgeoning (Isis, Face, Modular, Mighty Real, Trap City, Odyssey). My wish for 2014 is that many of these really invest themselves in building a whole vibe for their parties, top to bottom, instead of just relying on groovy headliners, online promotions, and audience goodwill. As the changing city chases out its artists and loses its edge, we need entire worlds of freakiness to escape into and call our own.

What does our most forward-thinking dubstep DJ do when dubstep’s no longer an option? He deepens his crates, cycling through 12 months-worth of excellent mixes, themed by genres like yacht rock and classic soul, to rediscover his bass roots while transforming his sound into something even more thrilling.

I finally get it! All you need is a $1 million light rig, 40,000 glowsticks, an indoor fireworks show, and an arena full of half-naked teens. This EDM stuff is actually kind of fun.

Disclosure’s Grammy-nominated debut Settle (Cherrytree) will nest atop most critic’s dance picks this year, and rightly so: the young Lawrence Brothers brought lovely, 2-step-fueled house back into headphones and charts worldwide. But if it also brings more attention to breezy sonic relatives like Bondax, AlunaGeorge, Joe Hertz, the Majestic Casual roster, and the hundreds of bedroom producers who suddenly switched from making EDM and dubstep to deeper house sounds, then so much the better.

Shoegaze plus death metal equals an arctic beauty and burning mystery that transcends even My Bloody Valentine’s wonderful, self-released mbv and, when listened to alongside this year’s icy electronic-ish masterworks like Tim Hecker’s Virgins (Paper Bag Records) and the Haxan Cloak’s Excavations (Tri Angle) — or more emotive ones like Chance of Rain (Hyperdub) by Laurel Halo, Psychic (Matador) by Darkside, or Engravings (Tri Angle) by Forest Swords — makes strange sense of a near future.

The fact that there was a near-riot to get into a performance this hypnotic, hyper-complex 50-minute 1974 piece by minimalist icon Reich attests to SF’s ravenous appetite for “contemporary classical.” That the audience sat in stunned silence a full two minutes after the piece concluded before exploding with applause attests to the excellence of our local players. (And while we’re on “classical,” kudos, too, to the SF Opera’s summer production of Mozart’s “Cosi fan tutte” — three fantastic hours of the most ravishing singing I’ve ever heard.

Here’s a question: Do you need to actually be at a party to enjoy it? I was out of town when this joint went down. But after witnessing my feeds blow up and listening obsessively to the Soundcloud set, later posted to Youtube, it feels like I was there when the young Brit freaked everyone out with a hard, deep techno set. No FOMO, baby.

I may be fascinatingly elderly, but all the young kids flocked to the ’90s big-room house sound revival this year. This party, a SF reunion brimming with new faces, classic tracks, and legends at the decks, is like Universe plus cool straight people, or maybe the End Up in the East Bay.

Vogue beats continued to come into, er, vogue harder than ever this year, their flashy attitude and underground authenticity influencing musicmakers, like our own up-and-coming Soo Wavey label. Young NYCer Divoli, however, gives you real quantum fishiness to gag on all day — and goes waaay above your wig, hunty. These three volumes of lightning-made bedroom beats might be overload, but take us into some incredible sonic landscapes, beyond the balls.

Forget Miami, Playa del Carmen is the new Ibiza of North America — with all the tech house festivals, bare white flesh, and urbanizing displacement (and opportunity) that entails. And Mexico’s tech scene, like its economy recently, is coming on strong with players like Rebolledo and White Visitation. But the best nightlife sound in the world still comes from Plaza Garibaldi at 3am in Mexico City, when dozens of spangled mariachi bands play all at once for your attention. Pure musical bliss.