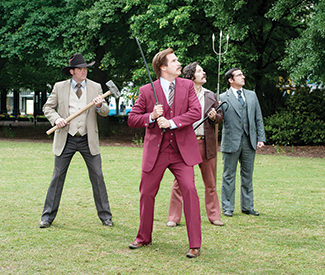 FILM The return of Ron Burgundy — the boorish, quotable Will Ferrell character immortalized in 2004’s Anchorman: The Legend of Ron Burgundy — has been heralded for months, thanks to an extravagant marketing campaign that has included car commercials, a new Ben & Jerry’s flavor, and Burgundy-branded Scotch.

But before you claim Burgundy fatigue, there’s the actual sequel to consider. And Anchorman 2: The Legend Continues is quite hilarious, as it turns out. Director, co-writer, and longtime Ferrell collaborator Adam McKay — formerly of Saturday Night Life, he’s the co-founder of Funny or Die, and has directed such Ferrell hits as Anchorman and Talladega Nights: The Ballad of Ricky Bobby (2006) — came to town to discuss his new comedy.

SF Bay Guardian I know you’re here to talk about Anchorman 2, but first I have to express my deep love for Step Brothers (2008).

Adam McKay We were just talking about how that’s the one movie we have that’s super-polarizing. People either loved it or hated it. Roger Ebert wrote one of my favorite reviews that we’ve ever had, where he said that the movie was a symbol of the downfall of Western civilization. [Ed. note: the exact quote is “In its own tiny way, it lowers the civility of our civilization.”] Will Ferrell and I loved that. It read like the Richard Jenkins character in the movie wrote the review! But it might be my favorite movie we’ve done. I think it makes me laugh the hardest.

SFBG Will you ever make Step Brothers 2?

AM We were actually on our way to making Step Brothers 2. The problem was, everyone I told said, “Why? Cause you can’t do Anchorman 2?” I said to Will, “Are we gonna make this movie and the whole response is gonna be, ‘[They made this because] they couldn’t do Anchorman 2‘?” I just didn’t want to deal with that. Fortunately, we love Anchorman as well. But yeah, we had a whole idea. We’d outlined it. John C. Reilly was in. So it still may happen.

SFBG A lot of Anchorman 2‘s humor comes from its cameos. Were you flooded with calls from actors who wanted in?

AM We did have a little bit of that, actually, which is unusual. Fortunately, they were people we loved. I heard right away that Tina [Fey] was up for a cameo, and I’m like, “Yes!” I bumped into Sacha [Baron Cohen], and I was like, “Hey, would you wanna…” “Yeah, I’ll do it!” It was weird to get those kind of effusive responses. It was kind of crazy.

SFBG The first film was PG-13. I’m surprised the sequel is, too. While watching it, I assumed it would get an R for language.

AM We actually had a long battle with the MPAA over it, and we had to trim down quite a few things. It’s all, like, sexual innuendo, and if you say this word you can’t say that word. But meanwhile, if you kill 100 people they don’t care. We were kind of pulling our hair out. But at the end of the day, I think we did pretty well with it. It was always meant to be PG-13. It’s a silly, kind of living cartoon movie. It’s not a hard, dirty movie.

The crack scene was a big, big [sticking point]. Originally it was much longer. But you’ll get to see that on the DVD. There’s a whole other version of the movie where we replaced all of the jokes, since we did so much improv. So it’s the exact same physical movie, but almost every joke is different.

SFBG A lot of the jokes might be perceived as racist or sexist if they were taken out of context. How do you ensure that viewers don’t receive those the wrong way?

AM That was really tricky. We had to calibrate that through all the screenings that we did. The first screening had too much of that in it, and it felt a little uncomfortable, so we’d kind of pull it back. But the whole premise is, these guys are idiots. And they don’t understand anything about multiculturalism, women’s lib — they don’t get any of it. So as long as that premise is clear, you’re OK. They’re not mean guys — except for Champ Kind, who probably is a Tea Party right-winger. But the rest of them are just idiots.

So long as the racial jokes were more just ignorance, it was OK. But if it ever became like a pointed slam, that’s when it would cross the line. So we stayed away from all that kind of stuff, and just had them sort of live in ignorance.

SFBG Like the first Anchorman, the film layers its silliness over cultural commentary. Here, it’s how ridiculous 24 hour news has become.

AM That was always the inspiration. In the first movie, we had women breaking into the newsroom, and these avuncular anchormen just being shits, basically. And that’s hilarious and awful at the same time, and significant enough that you have stakes that you can tell the story.

So for this one, the central idea was 24-hour news, and when the news became what it is today. Really, we knew we had the movie when we were like, “Let’s have Burgundy be the guy who ruins it all.” [Laughs.] And we decided to pin it all on him: the birth of infotainment, the birth of ratings-driven, corporate-owned news, and the idea that Burgundy would be really good at it.