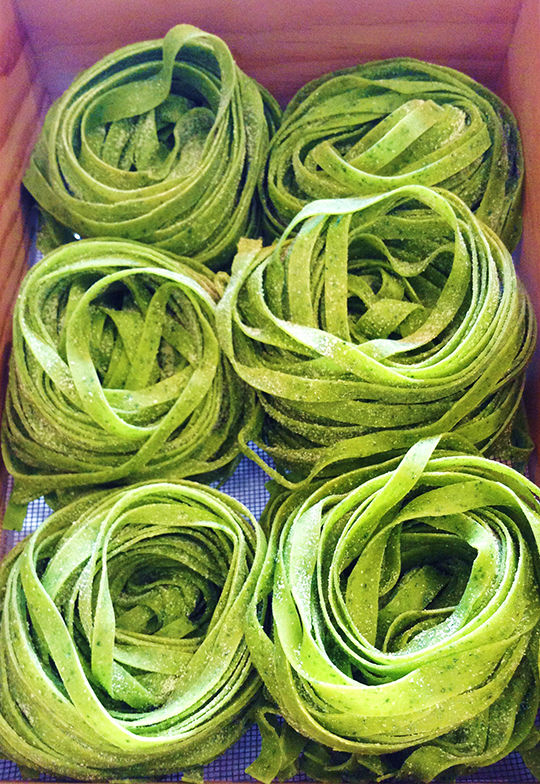 On a bright November afternoon, I ducked into Biondivino, a tiny but tremendously well-stocked Italian wine shop in Russian Hill, to meet John Pauley and Anna Li of Mattarello — an artisanal, handmade pasta pop-up.

Li, a Europe-raised, multilingual physician by day and tortellini-shaper by night, greeted familiar faces while pulling bundles of sage pappardelle, whole-wheat tagliatelle, parsley-garlic tagliatelle, squid ink spaghetti, saffron cavatelli, and the coveted tortellini al brodo from inside a cooler. Pauley, a former chef at several restaurants including the nearby La Folie, now works as a full-time sfoglini, or Bolognese-style pasta maker, for the couple’s two-year-old venture. If he was tired after spending five-and-a-half hours rolling out 50 pounds of dough (and subsequently stuffing and shaping it into 26 portions of thimble-sized, knotted nuggets), it didn’t show.

Walking me along the foldout table where pastas winked with specks of semolina, Pauley discussed their journey into la sfoglia. Five years ago while traveling in Bologna, a culinary capital known for parmigiano reggiano, prosciutto, mortadella, and tortellini, Pauley apprenticed with pasta makers Franco and Grazia Macchiavelli of Salumeria Bruno e Franco.

“In Bologna, pasta making is pretty much women’s work,” Pauley explained. Naturally, the women at the school were intrigued that a man would come all the way from San Francisco to learn their practice. “We all fell in love with each other,” said Pauley.

Mattarello maintains the same authentic spirit as the pasta made in Bologna. “Tortellini is as Bolognese as the Golden Gate Bridge is [San Franciscan],” said Pauley. Yet he was quick to point out that authenticity means different things to different people. In Bologna, tortellini is only eaten in broth. “To change something, you have to understand where it comes from. You start with a 450-year-old recipe for tortellini.”

In the US, Li and Pauley noticed, the bar for pasta has been set very low. Americans treat it as a vehicle for heaping on store-bought sauce and every vegetable in the pantry. On the other hand, explained Pauley, “the mistake other people make is that bringing a virgin olive oil or cheese back from Italy doesn’t make that food authentic. The spirit of cooking authentic Italian food here would mean, say, using great artisan prosciutto from Iowa.”

Pauley’s version of tortellini involves driving two hours to get the perfect farm eggs. “The hardest part is finding the right coloring. The egg yolks need to be orange to make the pasta really golden.”

He makes almost everything by hand in order to “get intimate with the pasta.” It’s not supposed to look perfect. The tortellini is stuffed with a mix of pork loin, eggs, parmesan, nutmeg, salt, and breadcrumbs; rolled; and sold the very next day.

That night I cooked the golden knots until they bobbed to the top of my boiling pot for several seconds, and slid a spoonful into my mouth. The texture alone was startling — the silk of the broth combined with an elastic, tender chew of pasta, creating a wholly new experience. The flavor came almost as an afterthought, in a delightfully grounding depth of meat, lift of nutmeg, and occasional bite of pepper, wrapped snugly between the sweet broth containing the brined memory of gently bruised vegetables. It only helped that the sky had turned dark and rainy.

The exception to Pauley’s handmade rule comes in the form of squid ink spaghetti, when he swaps the mattarello (or rolling pin, after which the pop-up was named), for the torchio, or “my torture device,” as he calls it. It began as a fun experiment after a trip to the Amalfi Coast, but customers can’t order enough, and La Folie has begun ordering it for its menu. “It’s too good of a product,” said Pauley, shrugging.

I leaned closer to the coiled ropes, noticing that they smelled strongly of the ocean in their pre-boiled state. I pinched one end of a beautiful black noodle, rubbed the Play-Doh-like string between my fingers, and took a bite. Raw, it contained an oddly tender chew. Cooked, it firmed up, yet remained fragile, pliable — I was seized with the desire to create a whole new adjective to describe these noodles, because the ones that came to mind couldn’t adequately capture what I tasted.

An epiphany: Fresh pasta is the dish. You need never wonder what you’re going to do with pasta — you’re not going to dress it, or drown it. You’re going to eat it. I ate these squid noodles in Mattarello tomato sauce for round one, which hid the essence of the sea more than I wished. I went lighter in round two, with a squirt of lemon juice, a plop of butter, a glop of olive oil, grated parmesan, and (this may sound strange) small chunks of avocado. Delectable, absolutely.

Amid San Francisco’s ultra-hip, ultra-now pop-up scene, Li and Pauley have witnessed friends turn their transitory trucks and tables into brick-and-mortar restaurants. They have business-savvy friends who tell them that now is the time to move forward.

“We know we’re at a fork, but we don’t know yet which prong we’re going to take,” said Pauley. He briefly pondered a larger pop-up, or expanding into more locations, but opening an eatery doesn’t appeal. “Anna is a doctor, and I don’t miss the restaurant scene, the appetizers, the entrées, the running around.” Pauley stops to say hi to friends entering Biondivino, then concludes, “I love making love to my dough. I love doing this.” *