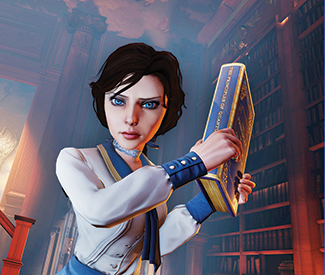 YEAR IN GAMER The year 2013 has been a triumphant, confident peak in a particularly long generation of gaming, and as we gather around various top ten lists to send off the Xbox 360 and PlayStation 3 in style, let it be remembered that the pair received a more-than-decent eulogy. Most of the year’s accolades will likely fall upon three games, and while all involve guns, shooting and explosions, the refinements of those mechanics demonstrate the medium is unquestionably evolving.

Following a massive plague that wipes out much of the US, Naughty Dog’s The Last of Us is a survival horror/third-person shooter involving an unlikely pair of survivors, Joel and Ellie. “Zombies” and “stealth combat” seem to be two ever-present gameplay types, but here they are conduits into a lengthy and subtly-developing relationship between these protagonists. Playing this game won’t change your mind about what it means to shoot a guy a bunch of times, but the human moments between the battles are some of the strongest the medium has seen.

BioShock Infinite (Irrational Games/2K Australia) also offers a memorable experience — even if at first you don’t fully understand what you’re playing. Set in an alternate 1912 America, Infinite initially plays out like gumshoe pulp fiction, as private eye Booker DeWitt blasts through a city in the sky in search of a missing girl — but the game concludes with a twist that will have you playing it again to see all the ways in which you were duped. A storytelling exercise in the guise of a first-person shooter, Infinite might be more fun to think about than to play…but boy is it fun to think about.

You’re aware Grand Theft Auto V  (Rockstar North) careened onto shelves this year? Admittedly, the series hasn’t changed much — it’s still an excuse to play the bad guy, this time in a faux-LA setting. But left to your own devices, and given the keys to the most detailed and straight-up “fun” cities the Grand Theft Auto series has seen, how will you spend your time? For every criminal option there’s an equally enticing civilian activity, and taking the experience online allows for fascinating commingling among fellow tourists of the criminal lifestyle.

Beyond the big three … Assassin’s Creed IV: Black Flag  (Ubisoft Montreal) shrugged off last year’s messy entry by casting the player as a pirate on the high seas. Like Grand Theft Auto, freedom is key to this series’ success and ACIV wastes no time loosing you upon small islands, lush jungles, and 18th-century port towns in your very own, customizable privateer vessel.

Who doesn’t like Ghibli movies? Ni no Kuni: Wrath of the White Witch is a Ghibli movie you can play. Featuring cut-scenes direct from the Japanese animation studio and stirring music from frequent Ghibli composer Joe Hisaishi, Ni no Kuni is more than a little “grindy,” but it offers a truer sense of childlike wonder than any other title this year.

Lucas Pope’s Papers, Please is often decidedly not-fun. As an immigration agent for a fictional communist country, you decide who enters and who is denied. Managing applicant’s passports and entry tickets is just the beginning of the frustration, and the real bite is in juggling doing the right thing against feeding your family. No matter which decision you make, you’ll probably feel a bit icky about it — a genuinely exciting feat for an industry that traditionally triumphs fun above all.

Sometimes it’s best to go in not knowing anything about a game. In the Fullbright Company’s first-person mystery Gone Home, a young woman returns to her childhood home to find no one there to greet her. The mystery of her family’s disappearance draws you through the old house, where you discover the private histories and desires of her loved ones through the bits and bobs they’ve left behind. *