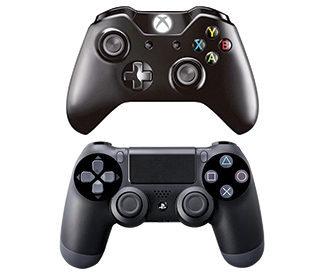 GAMER The next generation of game consoles is officially in stores and consumers demand to know — definitively — which is the superior console. Is it the PlayStation 4 or the Xbox One?

Unfortunately, the comparison isn’t that simple. Although both are sleek, state-of-the-art devices that play video games, we’re talking about two machines with different aims. Sony hopes the PS4 will lure back gamers that it disenfranchised with the expensive, non-intuitive and difficult-to-love PlayStation 3 by making things simple, fun, and focused on playing and sharing games. Microsoft is high on the success of the Xbox 360 and looking to dominate home media on all fronts, creating in the Xbox One an all-in-one device that allows you to control your TV, movies, and other digital downloads.

Strictly speaking, if you want to just play games and have an experience that is the same but prettier, Sony has your interests at heart. It’s the more powerful machine, current games look a bit better, and navigating the PS4 generally is an all-around smooth experience. Upon booting the system up, you’re greeted with soothing music and a fairly straightforward, simple interface. I was able to find all my games, apps, and settings within seconds, rather than minutes. The new DualShock 4 controller has a touch pad and a light bar for motion gaming (provided you have a PlayStation camera) and it performs these new functions with a minimum of hassle.

The most “next gen” aspect of the PS4 is the share button. A new button on the DualShock 4 is dedicated to sharing your experiences with friends, whether what’s being shared is video clips or actual streams of gameplay that can be viewed on another PlayStation, computer, or phone. Game streams and Let’s Plays have become their own genre on YouTube, and, by giving people that experience on day one (Xbox One’s streaming services are set to launch next year), Sony has a real upper hand on conquering the online gaming community that enjoys watching other people play games.

The PS4 is a machine that plays games, plain and simple, and right now the games it plays are only so-so. You’ve got a new Killzone, Shadow Fall; first-party beat ’em up Knack; and a few multi-platform — and cross-generation — titles that are likely to do well, but the must-have next-gen gaming experience just isn’t here yet.

The Xbox One is not nearly as intuitive as the PS4 and your first few hours with the machine will require patience and a bit of learning. Applications and settings are hidden in sub-menus and the revelatory Kinect voice commands are exhilarating when they work and aggravating when they inevitably do not. Growing pains were inevitable; Microsoft is attempting things that have never been done on a gaming machine before — like the ability to route your cable box into the Xbox One and change channels with your voice — and, if their history of iteration is to be trusted, it’s likely that the issues with organization and un-matched voice commands will melt away sooner rather than later.

Xbox’s launch games are favorable only in comparison with the PS4’s meager lineup. Forza Motorsport 5 is a wonderful showcase for what the Xbox One is capable of, and the best buy on either console so far, but the other exclusives are essentially limited to Dead Rising 3 and Ryse: Son of Rome, which are fun in spurts but offer nothing you haven’t hacked or slashed before.

Which leaves the question, what do you want from your “next-gen” console? If you’re in the market for a new device, you’re not wrong to expect improved graphics or increased resolution and frame rate. You want games to look better. And that’s at least partially there if you want it, but it doesn’t seem to be the current focus for either machine. Even on the PS4, the visual leap we’re seeing right now isn’t worth the $400 asking price, and the lower-spec’d Xbox One is tagged at a whopping $500 for a system bundled with Kinect.

In spite of all the internet furor spouted by gamers in the past few months about sub-standard resolution and graphics, perhaps Microsoft and Sony both realize the real coup is getting people who aren’t gamers to buy these consoles. In that area, Xbox One’s ambition to do more than play games is a risky pursuit, but one that could make all the difference for consumers who have only a passing interest in traditional gaming.

Time will tell which console resonates more with the public and some day financial reports aplenty will give us a definitive resolution on which console is more successful. But calling this a “console war” is more than a little sensational. Both the PlayStation 4 and the Xbox One currently offer incrementally better experiences than their previous-gen counterparts, and the world of popular consumer electronics has proven a little better is often just enough. *