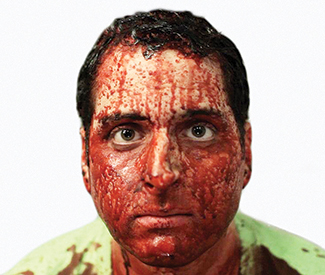 FILM Clad only in a dingy T-shirt and tighty-whities, with an overgrown beard and a hollow look of defeat in his eyes, shut-in Ian (Adrian DiGiovanni) spends his days channel-surfing and plotting ways to commit suicide. When his beloved vintage TV (“His name was Kent,” he tells the camera, in the first of many direct addresses) fizzles, smokes, and goes dark, he finally takes action.

But after he’s lurched off the couch and dumped enough household chemicals into his bathtub to kill several hundred depressed agoraphobics, he falls and hits his head. When he wakes up some time later, groggy and bleeding from the mouth, he realizes his grimy bathroom has a new inhabitant: a talking pile of mold that immediately starts spouting Tony Robbins-like encouragement at our sad-sack hero.

A lot happens in the opening act of first-time feature director Don Thacker’s Motivational Growth. Delightfully, and sometimes gruesomely, the rest of the film keeps pace, even though we never leave Ian’s apartment. Unwelcome visitors (a wacked-out TV repairman; a snarky delivery girl; Ian’s angry landlord) and a series of surreal hallucinations, in which Ian imagines he’s appearing in the shows he used to watch on Kent’s screen (the best one: an alien buddy-cop drama that looks straight outta Troma), are troubling — though the pretty neighbor he glimpses through his apartment peephole offers brief moments of relief.

But Ian’s main focus, of course, is Motivational Growth‘s title character (voiced with purring bravado by the great Jeffrey Combs). The mold — it insists on referring to itself in the third person — looks like a Krofft Superstar Hour prop that fell into a sewage tank; it has barely-discernable features beyond an expressive mouth that never stops talking (and “when the mold talks, you listen,” it says, sternly). Though the mold encourages Ian — who hasn’t left his apartment in over a year, to tidy up and set a course for “Successville” — there’s also something undeniably sinister about Ian’s increasingly bossy new buddy.

With its pleasingly retro vibe, including a bleep-blorp video game-y soundtrack, Motivational Growth is quirky without getting in your face about it — though it may inspire you to rush home and scrub every inch of your bathroom. It’s a high point in the 10th annual Another Hole in the Head Film Festival, produced by SF IndieFest and stuffed tighter than a turducken with indie horror, sci-fi, and fantasy flicks.

The fest offers a sprinkling of classics (for all you Room 237 obsessives out there, it features screenings of both 1980’s The Shining and projection-booth stunt “The Shining Forwards and Backwards” — talk about a labyrinth). But mostly, it’s a showcase of new films that might be having their only local theatrical screenings, including several intriguing imports.

Billed as the Philippines’ first-ever indie zombie movie, T.A. Aderto’s The Grave Bandits has a few major flaws, including an overload of bodily-function jokes and some of the worst mad-scientist acting ever captured on film. But its young leads — particularly Marti Sandino San Juan as the slingshot-wielding Peewee — and some gushing gore effects mitigate most of The Grave Bandits‘ more unfortunate elements.

The premise: Two scrappy ragamuffins (Peewee and his slightly older buddy, played by Ronald Pacifico) make their living robbing corpses, a survival strategy that makes them unpopular enough to be chased by angry mobs. They’re able to steal a small boat and escape to one of the country’s tiny islands — unluckily, it happens to be the same place a gang of pirates acted the wrong way around a giant gemstone tainted by “an alien virus, dormant for over 100 years.” Ergo, a new angry mob to evade — one made up of flesh-ripping zombies.

Elsewhere among the international selections is French Canadian filmmaker Renaud Gauthier’s Discopath. The writer-director is clearly a fan of cult-horror nasties — 1980’s Maniac and 1979’s Don’t Go in the House, and to a lesser extent 1977’s Suspiria, seem to have influenced this stylish, self-assured creepfest. After witnessing a terrible tragedy as a child, shy loner Duane (Jeremie Earp) can’t stand music, particularly that newfangled genre called disco. For whatever reason, he agrees to go to a dance club with a girl he’s just met — with disastrously bloody results. Fast-forward a few years, and he’s fled New York City for Montreal. Living under a fake name, he’s working as a handyman at a Catholic girl’s school and wearing hearing aids that mute out the dreaded sound of music (insert your own “Disco sucks!” joke here).

But once a psychopath, always a psychopath, and heads soon start rolling (and spinning on turntables, in fact). If Discopath‘s plot is familiar to the point of homage, its synth-scored commitment to detail reaches exceptional heights: period-perfect clothes, cars, tabloid newspapers, décor (including a giant remote control that Motivational Growth‘s Ian would covet), and carefully-calibrated amounts of garbage scattered on NYC’s Me Decade sidewalks. *