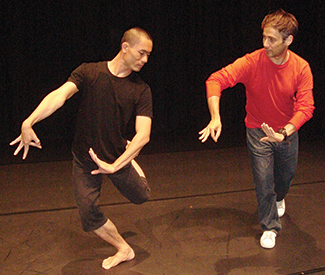 DANCE Conceptual French choreographer Jérôme Bel thrives on conversation. Sometimes, he participates directly, as he did in Pichet Klunchun and Myself, in which he and Thai dancer Klunchun talked on stage. Performed at Yerba Buena Center for the Arts in 2009, the piece enchanted me with its daring theatricality and enraged me with its faux naïveté. Pichet was both sturdy like a rock and evanescent like a passing thought.

Bel has made it his task to ask questions and shake up concepts around performance. It’s the lingua franca in today’s academia, but Bel is an artist. After stripping away the hoopla around art making, what are we left with? What do we as an audience expect? What is a performer, both from our and his or her perspective? Is there room for virtuosity, or is that something to hide behind? Marcel Duchamp asked similar questions in the visual art realm 100 years ago; choreographer Pina Bausch engaged with them for most of her career.

Two performances during Stanford University’s current Festival Jérôme Bel opened a perspective on the way Bel deals with his dissecting knife — with utter skill, and yet also with a smile and an easy mind. Bel may not like creating steps for his performers because he wants to see the moving body stripped down to its laconic essence. Yet he is one hell of a choreographer.

As a backbone and a trajectory for his The Show Must Go On (presented at Stanford’s Memorial Auditorium Nov. 13), Bel — actually, his assistants — chose 20 non-dancers, plus a few professionals to spice up the mix. They gave them a series of Bel-chosen popular music selections on which to develop movement material; the songs often skirted that tenuous line between sentiment and sentimental.

The dancers carried themselves anonymously, looking as they would if you were to encounter them on the street. But at the musical cue, they jumped into action with individualized physical responses. Yet the parameters were as tightly set as anything you might want to see on a ballet stage. These performers may have appeared untrained, but they had 55 hours of rehearsal to look as ordinary as they did.

Much of Show’s appeal arose from its simple, even simpleminded sense of humor of acting out song lyrics — normally, an absolute taboo in dance. For “Let the Sunshine In,” the stage lights came up; for “La Vie en Rose,” the audience was bathed in rose hues; during “Private Dancer,” the DJ jumped into the limelight. You could feel the audience gradually relax into the setup. (I fully expected some to join in on “Macarena.“) But they needed more time. When the volume of “The Sound of Silence” repeatedly dropped off, the audience’s humming filled in the gap; they had entered the performance. Toward the end, each dancer expressed a piece of individually chosen music, heard over a headset. In the back, a group belted out “We Are the World,” while downstage, French-born Muriel Maffre croaked out a hoarse “Born in the USA” and Jesselito Bie moaned “Oops … I Did It Again.” Perhaps most surprising was that for all its easy viewing and entertainment values, The Show Must Go On rode on an undercurrent of wistfulness and melancholy.

On Nov. 18, the festival moved to the beautifully appointed Bing Concert Hall. It was not a good decision. Sitting toward the front center, I had to strain to hear former Merce Cunningham dancer Cédric Andrieux’s contemplation on both the man and the dancer called Cédric Andrieux. After the performance, I spoke with other audience members and learned that they’d also had difficulty following the dancer. Cédric Andrieux is an intimate show; it belonged into a more supportive environment.

Performances exist in time, and Andrieux (with Bel?) controlled every last second of his: the way he made eye contact with us and paced his narration; the time he took to change clothes or reenact a painful modeling gig. His life, loves, and professional stories became part of him, whether he danced excerpts from Cunningham or contrasting ones by Trisha Brown. He complained about the tediousness of a Cunningham class, yet he looked gorgeous in the exercise. His regret about “not ever getting it right” — which eventually he admitted to having figured out — was contradicted by what he showed. Awkwardness and difficulties are as part of art as they are of life. I think most artists know that; Andrieux showed it. *

PICHET KLUNCHUN AND MYSELF (A FILM)

THE THINGS I HAVE DONE WITH DANCE: A CONVERSATION WITH JÉRÔME BEL