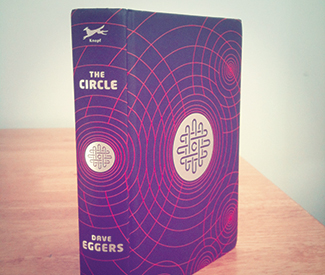 LIT Reading a book is a simple, solitary pleasure. As I sat with the thick, hardback edition of The Circle by Dave Eggers in recent weeks, I could feel its weight on my lap and watch my bookmark slowly proceed through its pages. It was a precious, visceral experience to read it, something I savored like a juicy secret.

Those sensations and my desire to keep them to myself for awhile are anathema to the hyper-connected, technology-obsessed world that Eggers creates in this dystopian novel — a world that is far closer to the one we live in and are building right here in the Bay Area than many techophiles would like to admit.

In fact, I deliberately waited until just after I finished reading The Circle (Knopf/McSweeney’s, 504 pp., $27.95) to read any of its reviews, and one of the first ones to come up on my Google search was a scathing critique in Wired magazine headlined “What the Internet Looks Like if You Don’t Understand It.”

Without a sense of irony, the review parrots the perspective of the book’s protagonist — 24-year-old Mae Holland, who gets a coveted job at The Circle, a near-future Silicon Valley company that’s an amalgam of Google, Facebook, Twitter, and your bank — who dismisses concerns about privacy, corporate power, and the reductive, data-driven trivialization of culture by saying that critics just don’t understand the Internet.

You see, The Circle — like many of today’s real life tech companies and a large portion of the shiny, happy true believers who work at them — is saving the world from all the messiness and ignorance that preceded its rise. And if you don’t get that, or you don’t accept trading your personal information for the collective good, then you’re just crazy and resistant to the inevitable march of progress.

“Who but a fringe character would try to impede the unimpeachable improvement of the world?” Mae asks herself when The Circle’s biggest critics mysteriously turn out to have incriminating information on their computers.

Later, Mae and The Circle’s “Wise Men,” who prod her progression toward becoming the fresh young face of the company, reduce that faith in the digital collective to the Orwellian slogan: “Secrets are lies. Sharing is caring. Privacy is theft.”

And in the end, the naif-turned-guileless-villain could only see the goodness and virtue of living “in a world where everyone could know each other truly and wholly, without secrets, without shame and without the need for permission to see or to know, without the selfish hoarding of life — any corner of it, any moment of it. All of that would be, so soon, replaced by a new and glorious openness, a world of perpetual light.”

I understand how some critics can fault Eggers for being a little over-the-top in presenting The Circle’s technologies and ambitions, or with its characters being sometimes two dimensional messengers of the author’s takeaways, or with plot points that seem a little implausible (for example, it’s hard to imagine most politicians “going transparency” and wearing live cameras around the necks all day, every day).

But that’s really part of the fun with this book, and those supposed flaws actually prove to be skillful devices that develop the novel into an allegory of modern times in much the same way that George Orwell did in 1984, a comparison that Eggers was clearly aiming for.

Instead of the grim, top-down, thought-policing security state conjured up by Orwell as he observed the rise of totalitarianism in Europe, the dystopian world that Eggers creates is a cheerful if vapid, bottom-up, all-knowing security apparatus that supplants government itself.

Much like in 1984, it is average citizens who become the key agents of the security state, persuaded by propaganda and skewed visions of the greater good to spy on their neighbors. Or in the case of The Circle — and its cheap, small, wireless, and ubiquitous SeeChange cameras, or the TruYouth tracking chips implanted in children for their protection — the actions of people in every corner of the world.

Yet the real power and insights in this compelling work of fiction isn’t with its portrayal of the grand endgame, as creepy as that all might be (and I won’t even get into a couple of the chilling plot twists and scenes that come toward the end of the book). What intrigued me most was its reflection of the attitudes and motivations that are so prevalent in the tech world today, as we see all around us, and the perils in following through these incubating ideas to their logical ends.

Mayor Ed Lee and his main financial benefactor, venture capitalist Ron Conway, the libertarian-leaning investor in a huge cross-section of local high-tech companies (see “The Plutocrat,” 11/27/12), regularly present technology as the panacea for all that ails this complex, multi-faceted city.

In fact, a campaign video that sf.citi created during the mayor’s race two years ago was eerily similar to the thoughts Mae had one day while away from the safe and sanitized cocoon of the Circle campus: “Walking through San Francisco, or Oakland, or San Jose, or any city, really, seemed more and more like a Third World experience, with unnecessary filth, and unnecessary strife and unnecessary errors and inefficiencies — on any city block, a thousand problems correctible through simple enough algorithms and the application of available technology and willing members of the digital community.”

Eggers writes from a place of love for San Francisco, the city we watched him adopt through his breakout novel, A Heartbreaking Work of Staggering Genius (2001). He then founded the McSweeney’s publishing house and the 826 Valencia writing lab, mentoring new generations of young writers and encouraging our love affair with the printed word.

I got to know Eggers at events and coffee shops in our Mission District neighborhood, and he was generous with his time and advice as I was writing my own book, The Tribes of Burning Man (2010). Eggers spanned the first dot-com boom and the current one, his award-winning books are critically acclaimed for their penetrating insights into what makes people tick, and so his observations about the quirks and pitfalls of techie culture here in the Bay Area can’t be easily dismissed.

The tech industry does a lot of good and important work, but there are inherent dangers in the marriage of powerful technologies to the power-hungry capitalists who finance their ventures. And the mediating factor is the multitudes who use the technologies and what their expectations are. It is a triad reflected in a parable-like story toward the end of the book when a shark, an octopus, and a school of sea horses are put into the same tank (spoiler alert: the shark wins).

The mysterious Kalden, a Mark Zuckerberg-like character who helped create The Circle, explains toward the end that he and others were motivated by a desire to apply technological fixes to any problems they saw, often just to see what could be done, without really thinking through the wider and longer term implications of what they were doing.

“I was trying to make the web more civil. I was trying to make it more elegant. I got rid of anonymity. I combined a thousand disparate elements into one unified system. But I didn’t picture a world where Circle membership was mandatory, where all government and all life was channeled through one network,” Kalden tells Mae.

We all want to be seen and counted, to be connected to something greater than ourselves, and to be protected from lurking evils in our world. The Circle reminds us to careful what we wish for, and it also offers an intriguing prescription for what ails us.