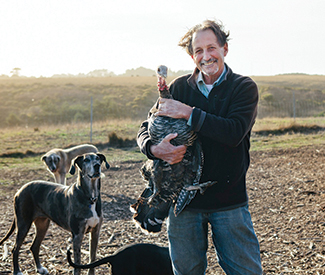 FOOD AND DRINK As Thanksgiving nears, along with the daunting task of writing up the grocery list, more food-savvy family chefs are swapping the commercially manufactured Broad Breasted White for a heritage turkey, which promises better flavor through a higher standard of bird life. Famous local grower Bill Niman of BN Ranch is trying to give his free-range, GMO-free, organic heritage birds a wider audience by offering them for order: starting at $98.98 for an eight-10 pound bird, delivered anywhere in the US, through his website, www.bnranchtotable.com. We caught up with him to ask what all the cluck’s about.

SF Bay Guardian What breeds of heritage turkey do you raise on BN Ranch?

SFBG What is an average lifespan?

SFBG How many do you raise for one holiday season?

BN This year we have about 8,000 heritage turkeys.

SFBG What do your turkeys eat?

BN It’s a GMO free ration. We’ve been struggling for about three years now to get something that’s GMO free, and this year we were able to do that 100 percent.

SFBG The other distinguishing factor of heritage turkeys, besides lifespan and feed, is their ability to mate on their own?

BN As extraordinary as that might sound. [Laughs.] And they can fly. And they don’t get sick. And they’re hearty. And they’re interesting, and intelligent. It’s all the things you’d expect from any animal in the barnyard.

SFBG What’s the basic personality of a heritage?

BN Turkeys are really cruel to each other, in the pecking order and whatnot, surprisingly cruel — but they’re really friendly to humans. When they’re young, 6 to 8 weeks old, they fly up and land on your shoulder, they follow you around, and in a sense we become surrogate mothers. You can call, and they follow you. I suspect these turkeys that we raise are so close to being feral, they’re so much like their wild ancestors. They could fly away anytime they want to. But they waddle up to the building, and say, “Kill me and eat me.” That’s probably how turkey became part of Thanksgiving, because they’re ready to be eaten in the fall.

SFBG How do you manage to see the turkeys as both animals and as meat?

BN You mean sending them to slaughter? Well, it is difficult, and it doesn’t get easier with numbers. What’s important is to make sure the animals only have one bad day on the farm. For me and our operations, it’s essential that we are at the slaughterhouse, making sure that it’s done as properly and as humanely as possible. We do that because we respect the animals, but we also know that there’s a very direct correlation between the eating quality of the animals and their temperament at slaughter.

BN They rule in taste tests, the heritage turkeys. The entire bird, even though it has a white breast, has the wonderful characteristics of the dark meat.

SFBG Got any favorite Thanksgiving preparation?

BN Yes I do. You cook the turkey till the breast meat is done, take it out, remove the leg and thigh, put them back in covered, and roast them for an additional half an hour, while the breast stays on the carcass on the counter, warm and covered.