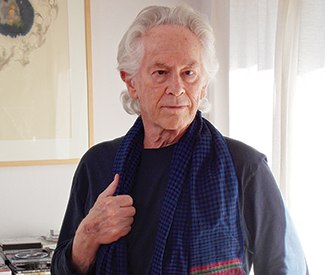 I drive up into the East Oakland hills, past 19th century “Poet of the Sierras” Joaquin Miller’s odd little cabin, to visit Michael McClure. Based on his youthful good looks, you’d never guess he was a few days shy of 81, but the trail McClure has blazed through literary history testifies by length, stretching back to 1955 when — alongside Philip Lamantia, Philip Whalen, and Gary Snyder — he was the youngest participant in the famous Six Gallery reading at which Allen Ginsberg debuted “Howl.” It was a seminal moment in postwar American poetry. “We all put our toes to the line that night and broke out,” he says. “And we all went our own directions.”

Beginning with his first book of poems, Passage (1956), McClure would find himself going in many directions, writing novels, essays, journalism, and even Obie-award-winning plays like The Beard (1965). As a countercultural figure, he could roll with the times, reading at the Human Be-In in 1967 in Golden Gate Park; associating with high-profile rock acts like Bob Dylan, the Doors, and Janis Joplin (for whom he co-wrote the 1970 classic “Mercedes Benz”); and appearing in movies like Peter Fonda’s The Hired Hand (1971) and Martin Scorsese’s The Last Waltz (1975). In the mid-’80s, he even began performing with the Doors’ Ray Manzarek on piano, releasing such CDs as last year’s The Piano Poems (Oglio Records). And though I’ve come to discuss Ghost Tantras, his 1964 self-published book of “beast language” reissued this month by City Lights, we inevitably touch on the recently deceased keyboardist with whom McClure played over 200 gigs.

“Ray died at a very wonderful time,” McClure says. “He’s 74 and at the height of his powers. People say, ‘You must feel broken up about Ray,’ but I’m actually happy to know someone who stepped out in his own glory. The last time I saw him was [last] November. We had just done a performance at the Sweetwater in Mill Valley. That night Bobby Weir sat in. It was like the Doors and the Grateful Dead embraced.”

THE LANGUAGE OF THE BEAST

But Ghost Tantras predates most of these famous exploits. The origins of what McClure calls its “beast language” can be traced back to his early play The Feast, performed in 1960 at SF’s Batman Gallery.

“The walls had Jay DeFeos and Bruce Conners on them,” he recalls. “The actors were dressed in Indian blankets and torn white tissue paper beards, seated before a long table that carried black plums and white bread, black wine. Thirteen of them performed a Last Supper-like rite and spoke in beast language and English of the melding of opposites and the proportion of all beings, from the incredibly tiny to the cosmic.”

“Beast language” might be described as a roaring deformation of language into something less oriented toward signification and more toward the physicality of the body, poetry as “a muscular principle,” as he writes in the original introduction, rather than as a mimetic text conveying images and ideas. Take, for example, these lines from tantra 46: “NOWTH / DROON DOOOOOOOOR AGH ! / Nardroor yeyb now thowtak drahrr ooh me thet noh / large faint rain dreeps oopon the frale tha toor / glooing gaharr ayaiieooo.” Signification isn’t the prime motivation here, nor is it entirely absent, as snippets of sense emerge and dissolve amid a sea of syllables. Such moments almost suggest reading Chaucer or Finnegans Wake, texts in some distant version of our own tongue, but they just as quickly vanish into phrases that resist intelligibility (“gaharr ayaiieooo”).

Yet despite this resistance, the writing of Ghost Tantras was also bound up in visionary experience. McClure began Ghost Tantras in 1962 while working for the Institute for Personality Assessment and Research, for the University of California.

“My role with IPAR was to give psilocybin to artists and to film them in that timeless state of the high,” he says. “I was probably an ideal person because I had given up the use of psychedelic drugs myself. Already, after a lot of experimentation in psychedelics and several essays that had been published by City Lights in Meat Science Essays (1963), I wanted to write a deep exploration of these highs after reading Henri Michaux’s gorgeous Miserable Miracle (1956), which was his — I felt personally — inaccurate description of the mescaline high. That inspired me to want to write clearly about this experience. Meanwhile, I had begun practicing Kundalini yoga, which is a chakra-centric yoga, and I was beginning to have powerful experiences.”

“ART WITH NO EDGES”

This desire to convey visionary experience might seem at odds with Ghost Tantras‘s frequent resistance to signification, yet the apparent paradox might be resolved through Abstract Expressionism, which McClure insists was “one of my most profound sources, the art with no edges, the art with no limits.” Viewed thusly, Ghost Tantras aspires to the degree of autonomy accorded to nonrepresentational art by not referring to experience but rather offering it.

“Allen Ginsberg had introduced me to Mark Rothko, and I got Rothko’s phone number,” McClure recalls. “I had Ghost Tantras and I wanted to show them to him but in the meantime I lost his number, as you did in those days. I always thought Rothko would be the right person to see the fields of letters in Ghost Tantras, as you see in one of his field paintings. If you look at Ghost Tantras in a different way, you see that each one is a field, a work of visual substance. Or nonsubstance.”

“I knew I was tangoing with my own personal ridiculousness when I wrote these. I don’t mind that, because in my writing when it’s at its most intensely serious it’s also at its most comic. And I call to mind what I think are some of the most important poems of the 20th century, Federico García Lorca’s ‘Gacela of Unforeseen Love,’ which is among the most intense love poetry I’ve ever experienced. It’s also kinda comic. My own poetry, when I believe in it the most, also has an edge to it that is not serious, or it’s serious, all right, but real seriousness has an edge that breaks on through to the other side.”

“It was part of the massive and inspired creativity that was rushing around me,” he concludes. “That’s probably the best clue I can give to anyone who wants to understand the sources behind Ghost Tantras, as part of the huge energy that was amassing itself and pouring through California at the time.” *