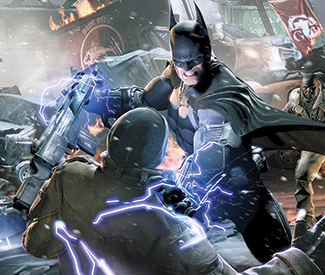 GAMER There’s something inherently lazy in subtitling your video game sequel Origins. Almost as ubiquitous as games with names ending Revelations, it is a title that means very little outside of indicating that the game in question is a prequel. This specific move into prequel territory comes in the same year that the self-titled Batman comic revisits the vigilante’s first year as a caped superhero with the storyline Zero Year, and features a similarly reckless Batman battling a series of assassins amid a Christmas Eve snowstorm.

It was a good decision to set Batman: Arkham Origins (Warner Bros. Games Montréal/Warner Bros. Interactive Entertainment; Xbox 360, PS3, Wii U, PC) a bit further into Batman’s first year on the beat, considering even a casual fan can recite the details of Batman’s initial transformation from billionaire bachelor to crime-fighting defender of Gotham City in the wake of his parents’ murder. Thankfully, Arkham Origins skips all that and gives people what they want: more of the tempestuous and enduring love-hate relationship between Batman and the Joker. The clown-faced psychopath is an unknown quantity for Batman this early into his crime-fighting career, and the unhinged performance by new voice-actor Troy Baker, following Mark Hamill’s departure from the series in 2011, is the glue that holds Arkham Origins‘ mostly clumsy and contrived narrative together.

Aside from the Joker, the villains of Arkham Origins are less-than-exciting; headlining C-listers like Electrocutioner, Copperhead, and Firefly prove we are well beyond the realm of Christopher Nolan’s film universe. Arkham City (2011) offered a fair number of lesser characters as well, but their inclusion lent the sandbox city a feeling of life and excitement — there was a new story to discover around every corner — and there was a weight to the threats they posed. By comparison, destroying Black Mask’s drug caches or disarming Anarky’s bombs matter little in the grand scheme of the night, and leaves Gotham feeling a smidge emptier than you might remember.

Thankfully, the backbone of Rocksteady Games’ Batman titles proves strong enough to support a less ambitious entry in the series. Cinematic, referential, and fiercely game-y, the Arkham games walk the line between slick Hollywood thrills and narratively incongruous, old school collect-a-thon, and new in-house developer Warner Bros. Games Montréal has done its best to respect the formula. Whether you’re countering a knife-wielding thug or picking off goons from the shadows, being the Batman remains as invigorating as ever, and you certainly get to do plenty of both during the 10-plus hour campaign.

Ultimately, you probably aren’t mistaken if you think Arkham Origins sounds like a quick cash-in to keep insatiable fans happy and to continue making money off a successful franchise. Arkham City‘s great feat was that it was an ambitious expansion of everything that worked in Arkham Asylum; by comparison this is a lateral move for the series. Still, it’s only truly disappointing when you consider the benchmark Arkham Asylum and Arkham City set for comic book adaptations. Five years ago, this would have been the best Batman game ever made. Today, it stands as only a decent one. At least they didn’t get Ben Affleck to play Batman, right? *