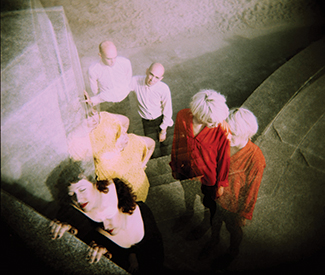 TOFU AND WHISKEY That voice. Those eerie, singular vocals that are somehow both alien and intimately familiar. They sound like electric Tesla coils wrapped in whipped silk. San Francisco’s Hannah Lew is most often heard harmonizing by three with her striking post-punk trio Grass Widow. With newer project Cold Beat, it’s her vocals alone above the needling guitars and anxious synths of a different band.

Lew has been writing songs as Cold Beat for some time, in between Grass Widow releases and tours, but this week she releases her first EP under the moniker: Worms/Year 5772, with songs inspired by the trauma of Lew’s father passing away a few years back. While Cold Beat is mainly a Lew production, she enlisted many local rock ‘n’ roll luminaries to both play on the album and back her up at shows.

The record’s sound is rounded out by guitarist Kyle King, drummer Lillian Maring, and Shannon and the Clams’ Cody Blanchard on guitar and synths. The live band features King, the Mallard’s Greer Mcgettrick on guitar, and Erase Errata’s Bianca Sparta on drums. That live version will celebrate the release of the EP with a show at the Night Light in Oakland Tue/5.(Cold Beat also plays Great American Music Hall on Nov. 14.) But before that, Lew spoke with the Bay Guardian about the origins of Worms/Year 5772, her DIY record label and music video projects, and the songs she played at her wedding last week:

SF Bay Guardian What inspired you to write new music as Cold Beat, outside of Grass Widow?

Hannah Lew I always write songs and sometimes they just didn’t totally feel like Grass Widow songs. I just kept collecting them and not really knowing if I should release them. As the tunes started accumulating I decided I should get a band together and figure out a way to share the songs. When Kyle King and I started playing — his energy really enabled the songs to come to fruition.

SFBG Can you tell me a bit about the songwriting process with Worms/Year 5772 and how the themes of “death, Internet surveillance, paranoia and science fiction” translated into the music?

HL “Worms” was written as a response to my grief about my father’s death in 2009. I couldn’t help but imagine worms eating his corpse — which was a very visceral image I couldn’t get out of my head…I think the horror of this was something I couldn’t really share with anyone, and in taking time to write more songs on my own I started realizing that it was good for me to have an outlet for some other concepts that were a bit more personal.

I always turn to science fiction when I am trying to understand or relate my feelings. It gives me a change to explore depths of doom and hope that I can more easily imagine not on this earth. In writing all the lyrics alone for Cold Beat there is a little more of me just in my own head which can be great and sometimes paranoid or depressed. I get really bad insomnia and many Cold Beat songs were demoed at 5 or 6am.

Grass Widow lyrics are always more of a conversation where as Cold Beat lyrics are more like an interior dialogue. It’s kind of like describing a dream to someone.

SFBG Does “Year 5772” refer to the Jewish calendar? Why did you make this connection?

HL My late father was a rabbi and I was raised very religious. I was writing Year 5772 about a dystopian post-apocalyptic dream I had that seemed to take place in some distant future and I started thinking about how the Jewish calendar is already in Year 5772 — actually a couple years later now since the song was written a few years ago — and how our concept of the future is based in what point in time we imagine ourselves in — but the concept of linear time is very relative.

I guess being Jewish is kind of futuristic and ancient simultaneously. I like the idea of collapsing time and writing a song that takes place in a landscape outside of time. I also like thinking about existing in many times simultaneously.

SFBG Did you find the solo songwriting process freeing or more complicated without the group’s input?

HL Some of the Cold Beat songs were written during the time Grass Widow was writing our last record — Internal Logic. Somehow they just seemed more personal and better spoken from one voice instead of related by three people. I think the complicated part for me was deciphering which songs were Cold Beat songs and which ones to give to Grass Widow.

Grass Widow is a great space where the three of us would relate and abstract our feelings and dreams together. But there were some things I was going through that I couldn’t synthesize with anyone else and just had to express on my own. I like having conversations about concepts with bandmates, but I also like working alone.

Luckily I can do both! I think it is important to be able to do things on your own so you know who you are and have something to offer a collaborative project. Just like in love.

SFBG You got married last weekend — what key songs were on your playlist? Are you willing to give up any other details?

HL It’s all kind of a blur. but it was so much fun! Some friends of ours put together a wedding band with Kyle King as the band leader. My husband (whoa!) and I put together a set list for the band to play of all our favorite dancing songs. I think the party really went crazy during the Dick Dale version of “Hava Nagila” and we got lifted up in chairs and everything, but also [the Flamin’ Groovies song] “Shake Some Action” was pretty epic too.

My friend Henson Flye made giant clamshells and Raven Mahon made a moon photo backdrop. We had a choir of friends sing “I’ll Be Your Mirror” while I walked down the aisle. It was really beautiful and a beautiful way for all our friends to express their love and friendship and show us support and for us to throw a fun party for everyone. We’re lucky to have a lot of love. Still buzzing from it!

SFBG As with Grass Widow (HLR), you’re putting Cold Beat out on your own label, Crime On The Moon. Can you tell me about the label, and why you’re sticking with DIY?

HL I really enjoy doing everything myself. HLR has been a great experience and we really took the time to make critical decisions about how we wanted to do business. I figured I could easily do it myself with Crime On The Moon since I had the experience of putting out the last few Grass Widow releases. One drawback is that when you put music out on a label you have an instant fan, publicist, and advocate — so when you’re on your own you have to manufacture your own confidence for what you are doing. But having good bandmates and support from your friends goes a long way!

SFBG You also make music videos — will you make any for Cold Beat? Are you working on any others currently?

HL Mike Stoltz, who made the Grass Widow “11 of Diamonds” video and collaborated with me on “Give Me Shapes,” is in the process of editing a Cold Beat video for “Worms.” So that will be out in the next couple of weeks! I am always updating my site (www.hannahlew.com) with new finished videos I make for other bands.

SFBG Anything else you want people to know about Cold Beat or about other upcoming projects?

HL Well I’m excited for our EP to be released November 5. We’ll have copies at our record release show at the Night Light in Oakland with Screature and Pure Bliss. Then we’ll be touring the West Coast to follow that.

I’m also releasing a seven-inch [that] Raven and I recorded with Jon Shade on drums under the name Bridge Collapse. We recorded with Kelley Stoltz and I’m looking forward to releasing those songs along with a compilation of SF bands writing songs as a response to the tech boom. So a lot of exciting Crime On The Moon projects ahead!