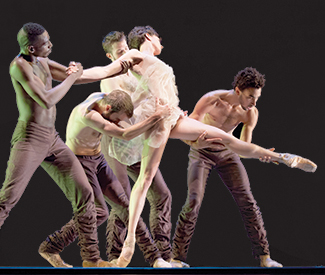 DANCE This past weekend, two dance companies showed premieres inspired by fiction writers. Alonzo King’s imagination was stirred by Irish author Colum McCann (Let the Great World Spin) for Writing Ground, commissioned in 2010 by the Monte Carlo Ballet. For Jenny McAllister, it was mystery novelist and screenwriter Raymond Chandler, whom she has read and loved since she was a little girl.

Fierce presence is what King asks of his dancers. For Writing, he placed them into an environment of spiritual music from around the globe, which has moved beyond its historical sources into a quasi-mythic arena. Rarely has a King work — divided into small scenes, as is his habit — conveyed such a fluid sense of unity.

Of course, Writing was full of struggles, disrupted connections, broken lines, and extensions that curled in on themselves. Van Sciver, in a long brown skirt, periodically whipped across the stage like some preternatural force, perhaps generating, or perhaps destructive to, the duet between Kara Wilkes and Beresford. A trio for women in pointe shoes — which suggest defiance of gravity — had them groveling in a crouch. Yet Yujin Kim serenely stretched, apparently indifferent to the violent physical struggle between Meredith Webster and David Harvey. For all their volatility, Kim and similarly tall partner Courtney Henry created visual anchors on the stage.

Writing moved toward its climactic final scene with a clear trajectory, perhaps starting with Harvey and Johnson’s contentious duet that ended with them walking upstage like brothers. They were followed by Kim’s solo to the spiritual “Over my Head.” For the finale, a door opened upstage, and an anguished Wilkes squeezed in, manipulated and supported by four men. She struggled, collapsed, and resurged again and again. Perhaps something was trying to be born out of incredible pain. And yet what compassion these men brought to whatever needed to be done.

LINES also presented the world premiere of King’s Concerto for Two Violins in D-minor, set to Bach’s much-acclaimed score. It just might be this eminent dance maker’s most musically astute choreography to Western classical music. The work opened with Johnson stretching his limbs as if trying to expand space beyond the horizon. The choreography emphasized variations within symmetry, such as the trios that chased each other or peeling stacks of double lines. Webster, Wilkes, Harvey, and Michael Montgomery danced the middle section as a double duet in a beautiful synthesis of edginess and lyricism.

McAllister’s nicely timed and entertaining Being Raymond Chandler, a one-hour dance theater piece for her 13th Floor Dance Theater, looks at the mystery icon (David Silpa) struggling with writer’s block, ambition, a messy almost-marriage, and a love for the bottle. But he was also portrayed as a serious writer, separate from the hack image that sticks to him.

The choreography, mostly social dances from the 1940s, was not particularly original, but these sequences set up a relaxed counterpoint to the staccato dialogs that keep racing from one fictional disaster to the next. There were moments when Being dragged — perhaps drowning in language — but it picked up speed and closed with a flourish.

Ever heard of a novel’s characters coming to life? In this piece, Chandler’s did, fighting with the muddle-headed writer for a different identity and desperately trying to stay in the story (hopefully, in a major part). Yet they also pitched in, with disastrous results, rewriting what was clearly a mess. The whole thing might as well be a backstage look at a soap opera.

Patric Cashman wanted to die — again and again; Erin Mei-Ling Stuart was hilarious as both Chandler’s almost-wife and the seductress who, she insists, needs to be a brunette. The versatile Blane Ashby had so many roles — a noisy neighbor, a crook, a former husband — that I couldn’t keep them apart. The weakest character in this entertainment was Eric Garcia’s sleepy Philip Marlowe, who only came to life halfway through.

Good comedy has an ability to draw you in even as you stay at arm’s length. McAllister at her best — and she is good here — has that gift of playing with perspectives and focus, while keeping the audience off balance McAllister has also learned from Chandler: Out of all those misfiring plot twists, she pulled together a lickety-split mystery that took off like a rocket. *