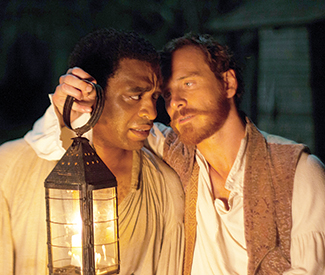 FILM Pop culture’s engagement with slavery has always been uneasy. Landmark 1977 miniseries Roots set ratings records, but the prestigious production capped off a decade that had seen more questionable endeavors, including 1971’s Goodbye Uncle Tom (from the Italian filmmakers who invented “mondo” films) and 1975 exploitation flick Mandingo (“the first true epic of the Old South,” according to its trailer). The latter is often cited by Quentin Tarantino as one of his favorite films; it was a clear influence on his 2012 revenge fantasy Django Unchained.

It’s fitting that Steve McQueen’s 12 Years a Slave is being released almost exactly one year post-Django, though the two films share little beyond the slavery theme. Django (which won Oscars for Tarantino’s screenplay and Christoph Waltz’s dentist-cum-bounty hunter) is loud, lurid, and gleefully anachronistic, with proto-KKK members arguing about the placement of eyeholes on their hoods, and hip-hop on the soundtrack. It approached its subject matter in a manner that paid homage to the Westerns it riffed on: with guns blazing.

By contrast, 12 Years a Slave is nuanced and steeped in realism. Though it does contain scenes of violence (deliberately captured in long takes by regular McQueen collaborator Sean Bobbitt, whose cinematography is one of the film’s many stylistic achievements), the film emphasizes the horrors of “the peculiar institution” by repeatedly showing how accepted and ingrained it was. Early on, a woman is sold and separated from her young son and daughter. Her new owner, played by Benedict Cumberbatch, urges her not to be upset, even as she screams in anguish, because “your children will soon be forgotten.” He has no awareness of the pain he’s inflicting — and he’s one of the more sympathetic white characters in the film.

12 Years a Slave is based on the true story of Solomon Northup, an African American man who was sold into slavery in 1841 and survived to pen a wrenching account of his experiences. An acclaimed violinist, Northup had a unique perspective on the South’s surreal status quo; he was born free and had lived a happy, cultured life until he was kidnapped and subjected to over a decade of mental and physical torture. As Northup, Chiwetel Ejiofor (best-known for supporting roles in films like 2005’s Serenity and 2006’s Children of Men) delivers a powerful, star making performance.

There’s one false note in 12 Years a Slave, so glaring it deserves a mention. The film is full of recognizable faces; parts played by big stars like Giamatti and Alfre Woodard amount to little more than cameos. But the last-act appearance of Brad Pitt (as an enlightened, worldly builder) proves a jarring intrusion. Pragmatically, perhaps it was worth it; Ejiofor has said in interviews that the megastar’s involvement helped the film get made. But that doesn’t mean it’s not completely distracting. *