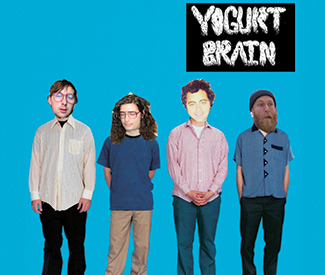 MUSIC Halloween’s like Christmastime for crafty weirdoes. But for me, crudely sewn, elaborate costumes are only half the fun. Around these parts, creativity seems to peak during what is arguably the most wonderful time of the year. The Bay Area particularly steps it up by honoring the punk band tradition of the Halloween cover show (where legendary bands are paid tribute through song and dress).

This year’s Total Trash Halloween Bash (www.totaltrashproductions.com) offers some of the usual suspects when it comes to rockers delivering camouflaged covers. However, with Nobunny channeling Bo Diddley as “Nodiddley” and Russell Quan joining Shannon and the Clams as Los Saicos, we step out of the box that usually brings us Cramps and Misfits covers. While those shows are completely appropriate (along with the typical homage to bands like the Ramones, the Damned, and Alice Cooper) and have proven popular, Oakland’s sentimental-grunge act, Yogurt Brain, has opted to take on Weezer this year. Rest assured — fans of the Blue Album and Pinkerton won’t be disappointed.

“I can’t wait to hear them do ‘Buddy Holly’ live,” Nobunny emails back in anticipation. Figuring it’s not the masked-man’s first time at the rodeo, I asked him and a few others about the origins of this tradition. No one seemed to be able to pinpoint exactly when and where it started, but Mark Ribak from Total Trash Productions quipped Thee Oh Sees’ John Dwyer “probably invented it” as an alternative to seeing the Cramps on Halloween (Bill Graham Presents booked an annual Cramps Halloween show in SF starting in the mid-1980s).

Ironically, Nobunny’s first, full-cover set would be the Cramps back in 2009; the same year front man Lux Interior died. I asked far and wide and got scattered remnants of Halloween parties past (like the time a member of Chicago’s Functional Blackouts recalled his previous band dressing in drag, billing themselves as Pretty Pretty Pretty Princess, and doing Bikini Kill songs in 1999).

“Here it definitely seems like more of an event than other cities I’ve lived in, but cover shows seem to happen everywhere in every city,” says Stephen Oriolo, Yogurt Brain’s guitarist and songwriter. He’s gotten into the theatrical spirit so much that by press time he’ll already have done a couple of shows as TRAWGGZ (a Troggs cover band) with members of the now defunct Uzi Rash. “Halloween is a time to be something you’re not. Merging that idea with parties or shows naturally makes sense to do a cover set.”

LA Burger bands like Pangea and Audacity have covered Nirvana and Adolescents respectively. Closer to home, the Clams, who are repeat offenders, have done Devo and Creedence Clearwater Revival (which by all accounts was something you had to see to believe), and Uzi Rash made minds melt with a searing interpretation of Monks songs, shaved heads included (Thee Parkside’s Hallorager II, another Halloween show, will have a different Monks cover band this year. www.theeparkside.com).

So put on your costume (you might even win a contest if it’s good) and have an old fashioned sing-along with a room full of equally pumped people at one of these shows. I just pray my chances of hearing “The Good Life” live doesn’t end up being a prank. The room is sure to erupt as the tradition thrives in the Bay.