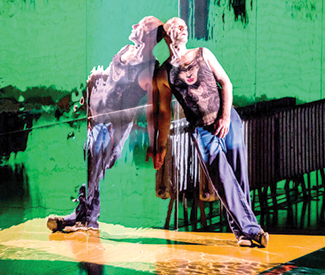 THEATER Maybe there’s no better way to grasp your own time and place than by leaving it — in this case, trading San Francisco for Wroclaw, Poland, and Pacific Standard Time for a whiplashing case of jet lag. Wroclaw was home base for a little more than a week during the recent Dialog Festival (Oct. 11–18; dialogfestival.pl/en), which was in its seventh season as a major biennial international theater festival created and programmed by Krystyna Meissner, a force in Polish and European theater for decades.

Joining a cohort of Americans, including several from the Bay Area, most of whom had been invited to the festival by the Center for International Theatre Development (an organization with which I’ve recently become formally associated), we were treated to work by artists from Poland, Germany, Holland, South Africa, Rwanda, Estonia, Iran, Canada, Mexico, Spain, and Hungary. The topic this year, “Violence makes the world go ’round,” was a proposition answered variously and often ingeniously by the productions on offer. The best of these expertly delivered that consciousness-altering blow you want from theater or any art form, as well as much food for thought — not only about the reality of violence in the world today, but the place in it all of the artist, the individual, the public, the spectator, and the theater itself.

For now, one example will have to suffice: a staging of British playwright Sarah Kane’s 1998 play, Cleansed, by Polish director Krzysztof Warlikowski. This was actually one of two separate stagings of the same play in the festival this year; the other was by renowned Dutch director Johan Simons, working with Germany’s Münchner Kammerspiele, who offered three Kane plays in a single evening. (It was also one of two pieces from Warlikowski at the festival, the other being his latest work, Warsaw Cabaret.)

Warlikowski is widely known as one of the masters of the Polish theater today, and his staging of the Kane play is still in demand 12 years after its controversial premiere in 2001. Seeing this legendary production was an extraordinary opportunity, and its impact was in no way diminished by the hype.

Cleansed comprises a discrete set of scenes in which a sadistic “doctor” named Tinker perpetrates vicious humiliations and atrocities on a group of inmates. Among the latter is a grieving woman who has entered the doctor’s wicked sanatorium to commune with the spirit of her dead brother, a heroin addict murdered gruesomely by Tinker in an early scene. There is also a gay couple whose commitment to each other is brutally tested by the awful interventions of Tinker.

Warlikowski’s production unfolds as a harrowing yet gorgeously languid fever dream. Set on a small stage, with an institutional bathroom wall at the back, the strikingly crisp and potent images throughout distort in the reflective surfaces bounding the space. Often drowned in a shifting sea of garish light, accentuated with piercingly beautiful music (the songs derived from the text are sung in the original English), the stage nevertheless leaves ample room for brilliant performances. These deftly created characters and relationships speak eloquently to the deep compassion and understanding there throughout Kane’s penetrating nightmare. (In a seductive and telling move, Warlikowski tacks on a monologue about desperate love, taken from Kane’s Crave, at the outset of the evening.)

Kane’s own productive extremes as a playwright — her cool formal intelligence and invention, as well as her anguished, aching, and uncompromising vision — were served perfectly by the precise and enveloping aesthetic of this exquisite production. But what was it that brought this play and this director together in the first place? And what was the nature of its early impact? In a talkback with the director the following day, a Polish journalist and critic helped set the scene.

“I saw Cleansed many years ago,” he remembered, “at a time when the LGBT movement in Poland was just coming out of the closet. At the time, it was truly a shocking piece. Now it’s a piece that I’m proud of. I’m proud to see how much has changed. Back in the day, the mayor of Warsaw tried to ban the Pride parade and there was only one politician who dared to show up. I remember there being several hundred of us, separated by a double line of police officers — mind you, the demonstration was legal — and above the heads of the police officers, stones were flying at us.”

Warlikowski recalled, “After the first reading we gave up on it. I decided we wouldn’t do Cleansed but do Hamlet instead. It’s a little difficult to imagine now, but I was really shattered by the stones flying at participants of the LGBT Pride Parade. We were working on Angels in America in some dingy little basement. I felt excluded. I felt like I was underground. Groups of women would roam the streets and tear down the posters for Cleansed. Director Krystyna Meissner would go around town to keep them from being torn down.

“I added the monologue from Crave because I thought that would be the only way to get Polish theatergoers to see the piece. The first response was horrible. Whereas people saw the dismemberment as theatrical and acceptable, they were more offended by two guys kissing, and people would get up and leave the room. That’s not something we can really understand today. So there had to be this ten-minute monologue, speaking of love, to trick you into staying for the rest.

“I remember watching the show sitting next to a couple, probably a yuppie couple, new middle-class, in their late 30s. During the first monologue, the woman never looked up. I felt I was embarrassing her. And for the Catholic nation that we still are, it was a lot to expect. Hence all the embellishments, everything that brings in a dimension that makes the dialogue possible — dialogue with the piece and dialogue with society.” *

For more on the Dialog festival, visit www.sfbg.com/pixel_vision.