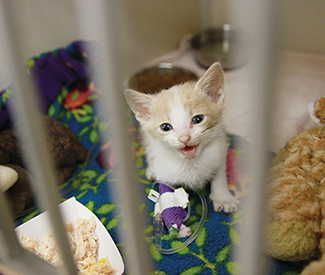 DEATH ISSUE Like in any hospital, the doctors at the San Francisco Society for the Prevention of Cruelty to Animals shelter deal with the living and the dying on a daily basis. But in these halls, the dying often have no homes and no families — unless they’re lucky enough to leave through the front door.

The SPCA is a unique safe haven for the furred, a pioneering “no-kill” shelter. The distinction doesn’t mean no death, it means the staff actively avoids euthanization of animals that have a chance of being adopted, including those that are already in the process of dying.

The doctors, technicians, and support personnel have a unique challenge: While most pet owners — or pet guardians, the official replacement term San Francisco adopted in 2002 — deal with the death of a beloved pet once or twice in a lifetime, the people here learn to deal with losing the animals they love every week.

The term they use is “compassion fatigue,” and the specialists here have to learn how to manage emotions surrounding death of animals that number in the hundreds every year.

Dr. Kate Kuzminski, the director of shelter medicine at the SF SPCA, gives us a tour. Our first stop is a small checkup room, where two adopted kittens, Liam and Otto, are pacing on a table.

“Here’s your opportunity to see poopy kittens,” their guardian, Judy, says. Though she’s playful, diarrhea can be dangerous for kittens if left unchecked. Diarrhea leads to dehydration, which leads to death.

Kuzminski looks them over, pulling the unhealthily scrawny young cats by the scruff of the neck. They’re a dark, dusky grey, with poofy fur, and about the length of her hand. After just a minute of looking them over, she prescribes a treatment and moves on. The brevity of her visit seems callous at first, until she tells us that she has more than 300 animals clamoring for her attention.

The most vulnerable of the animals under her care are kittens, Kuzminski explains. “We have a great foster program, but without the foster program they would likely die,” she says. It costs thousands of dollars to care for one kitten for a few days.

Two kittens in beginning of life care at the SF SPCA snuggle.

Compartments along one wall hold about three kittens each, many hooked into little IVs that kept them hydrated. The kittens tumble and play with each other as she discusses their likelihood of living. The facility has an extraordinary success rate, she says, but sometimes there’s a limit on what the vets can do.

The kittens mew and meow in the background as she outlines their options.

When an animal is suffering, sometimes the answer is euthanasia. But for those with kidney disease, cancer, or other debilitating conditions, the SPCA’s “Fospice” program is sometimes the answer. Fospice is the combination of two ideas: Foster care, and hospice. It’s end of life care for homeless pets.

Alison Lane is the Fospice coordinator, overseeing 13 or so animals at any one time. “Most of these cats, and sometimes dogs, if they were in any other shelter, they’d be euthanized,” Lane says. “They’re hard to adopt out.”

The foster owners are provided free food and vet care for the animals they nurse into death. Photos of the pets and their owners are on Lane’s door — one cat watches fish float by on an iPad. The pets often last much longer in Fospice than they’re expected to, she says.

“Amore is only three years old but has congenital heart failure. She’s been out for three years now, the doctors were certain she only had three weeks to live,” Lane says. “But we’re not looking to extend their lives necessarily, we just want to make their quality of life better.”

The SFPCA’s hospice found homes for 1,045 cats and kittens and 115 puppies in 2012. But there are only a dozen or so animals in Fospice care. When one dog had to be euthanized just a few weeks ago, the staff held a “last day of life” party for her and the owner.

Laura Mullen, a foster technician, tells us it was healing for her and the staff.

“We had an Amber party, with balloons and flowers and she got hamburgers and all sorts of things. Amber had a good time, a good snack, and had her family around her. It ended on a happy note,” she said.

Mullen needed it more than most because she usually assists Dr. Kuzminski when an animal is euthanized. She says kitten season is often the hardest. Between December and March, they see anywhere between 30-40 kittens a day. Mullen is a 12-year veteran of the SPCA, so when the less experienced techs can’t handle it emotionally, she steps in to assist with euthanasia.

Dr. Kate Kuzminski is Director of Shelter Medicine at the SF SPCA.

First, they separate the animal into a room on its own. It’s very important the other animals don’t see the process, Mullen says. They sedate the animal, and touch its eyelids to make sure they are asleep. Then they administer the euthanizing fluid and watch it take its last breaths and check for a pulse with a stethoscope.

Kuzminski said when they euthanize an animal, they often email the volunteers, techs, and vets who spent the most time with them so they can say goodbye. Before she asks for a tech to help her ease an animal to its final sleep, she asks about how the person is feeling that day.

“I always check in with Lauren, ‘are you okay with doing this today?’ It’s easy to get burnt out,” she said. Kuzminski’s colleagues do the same for her. Though she’s seen a lot of animals through their last days, she says the hardest loss she’s dealt with on the job was a dog named Coco.

When Coco came in, she was already suffering. She couldn’t walk, and couldn’t eat. They amputated her leg. When her esophagus closed, they took turns feeding her intravenously. The small staff grew to love Coco. The team worked with her for six weeks, in shifts. Ultimately, she didn’t make it. When Coco was euthanized, Kuzminski was out of town on business.

“The difficult thing about when Coco died was I wasn’t here for my staff,” she says, her voice fluttering a bit as she speaks. “You really want to win.”

But sometimes, you don’t win. And with the short lifespan, fragility, and sheer number of animals in pet-loving San Francisco, the staff of the SF SPCA sees a lot of death. For Lane, it helps to think of death as a part of life, something she learned here.

“As sad as death is, it’s inevitable. We all try to make the death, the passing of this animal, as easy and as comfortable as we can make it,” she tells us.

When a pet passes, they give a card to the foster owners, but it’s not a condolence card. It’s a thank-you card. “I think I’m much less afraid of (death),” she says. “You get that feeling of, well, we’ve done everything we can, and now we say goodbye. It’s not an awful thing, it’s not terrible. It’s about how you’ve spent your life. “