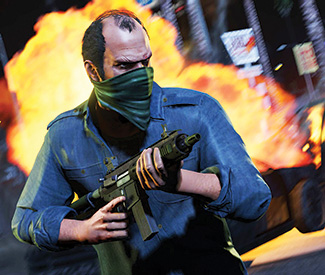 GAMER Yes, it’s time to talk again about the game in which you steal cars and kill prostitutes. And it’s another chance for the national news media to organize roundtables to discuss violence in video games, and the effects it might be having on the nation’s youth.

Let’s be honest: You know right now, before reading this article, whether or not the Grand Theft Auto series — which released GTA V (Rockstar North, Rockstar Games; PS3, Xbox 360) last month, and made a cool $1 billion in its first three days on sale — is something you want to play. And for developer Rockstar North, that’s both a blessing and a curse.
Perhaps surprising for those who haven’t played a game in the GTA series, the biggest draw isn’t the rampant violence but the experience of exploring a carnival funhouse version of present-day America.

GTA V’s look-alike setting of contemporary Los Angeles and its surrounding countryside, including windmill-strewn hills, mountain ranges, and a great salt sea is more than scenery. Billboards for fake reality shows and overwrought radio commercials shilling products like lap-band surgery and bottled water serve to drive home the absurdity of modern life. Buildings don’t just give the impression of a real city; each one has character, and often times a backstory. It is a city that feels alive. Amid the hail of gunfire, it’s easy to forget that Rockstar consistently pushes the limits of what a sandbox world can look like, with a level of detail that is unprecedented in a game of this size.

The story is divided among three protagonists: Michael, the ex-criminal trying to enjoy retirement in a posh house in the hills; Franklin, the hungry young gangster who dreams of making the big time; and Trevor, the lunatic. Though he is by far the most compelling character, it’s easy to see why Trevor isn’t the star of his own game — his complete lack of respect for human life or the rules of society make him an untenable prospect for a lead character in a title of this visibility. But, while his morals are despicable, he possesses a code of honor that’s difficult not to respect on some level.

Eventually, the three characters meet and perform heists and other criminal activities, and you are often allowed to switch from one character to another on the fly. Compared to GTA IV, the narrative — concerning a betrayal nine years previous and a number of government blackmail schemes — is wound much more tightly around the gameplay, and the draw of completing missions is in fleshing out the characters, rather than performing chores (something players have harped on in the past). However, the game does sometimes struggle, as if almost too big for its current-generation breeches. Pop-in and frame rate drops and ultra-compressed video prove that GTA V unfortunately is still working within the strict limits of the PlayStation 3 and Xbox 360.

Is it the biggest and best Grand Theft Auto game ever? Absolutely, but such a feat is no surprise considering the legacy the series has developed. And, being aware of that legacy is paramount to tempering your expectations; as much as the GTA series is targeted for being controversial and edgy, the formula isn’t exactly risky. People want to be told they can do anything they want. Buy a yacht. Do yoga. Trade on the stock market. Shop for cargo shorts. Drive a car out of an airplane and take a selfie to post on the internet when you land. For all its little refinements, GTA V doesn’t stray far from its roots as an over-the-top pastiche of crime movies and low-brow comedy.

Community reaction to 2008’s ambitious-but-flawed GTA IV has shifted so dramatically since its release that it’s tempting to be overly critical of GTA V’s more grating or game-y elements rather than risk being out-of-touch a year on. Ultimately this is a game that gives you exactly what you came for. But you knew that already.