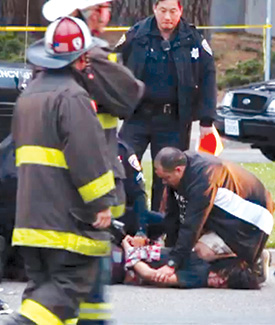 The San Francisco State University Police Department will soon arm its officers with conducted electrical weapons, known by the brand name Taser, following a statewide push from the California State University Chancellor’s Office to arm all of its campus police statewide with the weapons.

The university police started training with their new weapons Sept. 12, according to university spokesperson Ellen Griffin, but haven’t armed its 28 officers with them just yet. The department still has to set rules for their use and the cabinet of SF State President Leslie Wong will soon meet to advise him on Taser policy. Details on what shape that policy will take are still hazy, the university told us.

“What I can say is that Dr. Wong is deeply committed to protecting the safety and welfare of our campus community,” said Shawn Whalen, a member of the president’s cabinet.

For the past decade the SFPD has tried at various times to have their officers armed with Tasers but have met loud opposition and are without them to this day. One of the most vocal opponents of the weapons, Police Commissioner Angela Chan, is concerned that the Tasers can be fatal.

“Tasers can cause serious injury or death and have cost law enforcement that use them millions of dollars in lawsuits,” she told the Guardian. About 500 people having been killed by Tasers in the US since 2001 according to a report Amnesty International released last year.

Of those killed, Amnesty International said, 90 percent of the victims were unarmed. Despite the statistics, Tasers are in widespread use around the country and in the California State University system.

Mike Uhlenkamp, spokesperson for the CSU chancellor’s office, said that 17 campus police forces were armed with Tasers, and now all 23 will have them, including SF State.

The arguments Taser advocates make for having the weapons is that they can be used in lieu of a gun. Steve Tuttle, spokesperson for Taser, said that was the reason 17,000 law enforcement agencies use Tasers worldwide.

“I think it’s a loud minority that’s gotten their way in San Francisco,” Tuttle said. The idea that SFPD is the lone holdout had him saying that the “vocal minority” got their way.

But Chan said that’s a myth. Tasers are often used as a compliance weapon when an individual is passively resisting arrest or not responding to an officer’s commands, she said. “Unfortunately, this can lead to overuse and unnecessary use, especially on young people and people of color, as we’ve seen around the country, including on college campuses.”

She has reason to be concerned about the safety of the campus community. When activist squatters were arrested in May by the SF State’s university police, allegations of excessive force streamed in.

The activists printed a zine documenting their experience. Melissa Nahlen, 25, reportedly wound up with “cuts near her eyes, a bruised and swollen lip, a swollen left hand … and cannot bend her neck downward due to being stomped on by the police.”

Tasers are used to avoid just that kind of situation, Training Lieutenant Randall Gregson of the BART Police Department told us. Though policies differ from department to department, Gregson ran the Guardian through BART’s tactics in using Tasers to provide a glimpse in the things SFSU will need to consider.

BART police carry their Tasers on the “support” side of the belt, meaning the non-dominant side, he said. They also have a choice of carrying it in their duty belt on a thigh holster. “It’s an officer’s individual preference,” he said.

That preference is important, and sometimes could mean the difference between life and death.

When BART officer Johannes Mehserle reached for his Taser but mistakenly drew his gun and shot and killed Oscar Grant back in 2009, issues about where to holster weapons came to the fore.

“How could a trained officer mistakenly pull and fire his gun if, as he claims, he intended to deploy his Taser?” Mehserle’s lawyer wrote in a rhetorical question in a court brief, arguing that BART’s Taser policy was a factor in the shooting.

That’s the exact kind of incident President Wong’s policy will address for his officers, and the lives of the students of San Francisco State University may depend on it